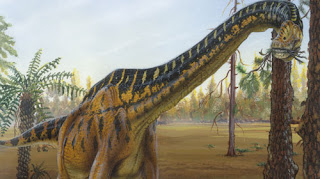 The only thing missing here is mention of the likelihood that these critters operated in swamps where their mass was supported by water in the first place.  Young ones could well have been quite ambulatory, but once settled into a home swamp with ready access to water weeds, movement becomes a luxury.

This critter was not a grass eater and that pretty well restricts it to the swamps.  Obviously, the neck also floated as well allowing the creature to vacuum out its immediate locale before moving on.

Curiously, traditions from conform to this model of behavior.  Those following this blog understand the importance of the Australasian biome.

(PhysOrg.com) -- In a recent study published in Biology Letters, Professor Graeme Ruxton from the University of Glasgow and Dr. David Wilkinson from Liverpool John Moores University use mathematics and a comparison to the old 1950s style vacuum cleaners to explain the benefits of the very long necks seen in dinosaurs like the Brachiosaurus.

Dinosaurs like the Brachiosaurus and Diplodocus, who roamed the Earth from 200 hundred million years ago to their extinction 65 million years ago, had extremely heavy bodies and very long necks. Debate between the scientific communities has been going on for years as to just why their necks were so long and what its purpose was.

Many believed that these long necks would have been used to forage for high, hard to reach foliage, similar to that of a giraffe. However, other paleontologists believe that in order for these dinosaurs to raise their necks up high, the blood pressure required to get blood to the brain would have been too much to be feasible.

Looking at the basic body design of these dinosaurs, the team of researchers could best describe them as like the old style vacuum cleaners of the 1950s. With a large and cumbersome cylindrical body and a long reaching hose with a vacuum head, these vacuums worked in a similar manner to what they believe the dinosaurs did.

Using mathematics to prove their theory, the researchers determined that the ideal neck length would have been around nine meters long. By keeping their body in one location and using their neck to forage, they were able to cut their energy output by as much as 80 percent.
More information: The energetics of low browsing in sauropods, Biology Letters, Published online before print March 23, 2011, doi: 10.1098/rsbl.2011.0116