Burzynski The Movie - Cancer is a Serious Business 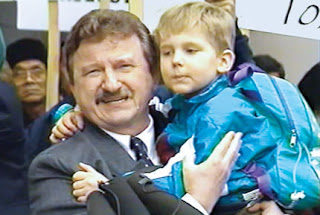 This movie will portray the tension produced when new protocols are worked with.  The reviews are good for the work done by the director and the movie will certainly bring attention to the underlying medicine and that may or may not lead somewhere.

I also attached a review on the science by Saul which is actually fair minded, though questioning credentials when those same credentials pretty well puts this researcher up to his eyeballs with the right biochemistry.  A lab technician in the right place is often the right guy, so the real credential is to ask if it is plausible for this individual to work with these materials and to make decisions with them however reckless.  In this case he certainly was there to do this type of an experiment.

Exactly the same thing has happened with the Rossi Focardi Reactor a couple of months ago which is producing ten to twenty times its input energy.  The present explanations may turn out to be bone stupid, but the empirical result is its own credential and theory can always wait.

"Burzynski has made in my opinion, the most important, if not the only breakthrough discovery in the treatment of cancer." - Dr. Julian Whitaker, The Whitaker Wellness Institute

"It's [Burzynski the Movie] an important piece of investigative journalism that really nails the medical establishment and especially those bastards, the drug companies. I was truly outraged by the treatment Dr. Burzynski received. I can hardly wait for the next chapter. You've performed an important public service. Keep up the good work."

Burzynski, the Movie is the story of a medical doctor and Ph.D biochemist named Dr. Stanislaw Burzynski who won the largest, and possibly the most convoluted and intriguing legal battle against the Food & Drug Administration in American history.
His victorious battles with the United States government were centered around Dr. Burzynski's gene-targeted cancer medicines he discovered in the 1970's called Antineoplastons, which have currently completed Phase II FDA-supervised clinical trials in 2009 and could begin the final phase of FDA testing in 2011–barring the ability to raise the required $150 million to fund the final phase of FDA clinical trials.


When Antineoplastons are approved, it will mark the first time in history a single scientist, not a pharmaceutical company, will hold the exclusive patent and distribution rights on a paradigm-shifting medical breakthrough.


Antineoplastons are responsible for curing some of the most incurable forms of terminal cancer. Various cancer survivors are presented in the film who chose these medicines instead of surgery, chemotherapy or radiation - with full disclosure of medical records to support their diagnosis and recovery - as well as systematic (non-anecdotal) FDA-supervised clinical trial data comparing Antineoplastons to other available treatments—which is published within the peer-reviewed medical literature.


One form of cancer - diffuse, intrinsic, childhood brainstem glioma has never before been cured in any scientifically controlled clinical trial in the history of medicine. Antineoplastons hold the first cures in history - dozens of them.


This documentary takes the audience through the treacherous, yet victorious, 14-year journey both Dr. Burzynski and his patients have had to endure in order to obtain FDA-approved clinical trials of Antineoplastons.


Dr. Burzynski resides and practices medicine in Houston, . He was able to initially produce and administer his discovery without FDA-approval from 1977-1995 because the state of at this time did not require that physicians be required to adhere to Federal law in this situation. This law has since been changed.


As with anything that changes current-day paradigms, Burzynski's ability to successfully treat incurable cancer with such consistency has baffled the industry. However this fact has prompted numerous investigations by the Medical Board, who relentlessly took Dr. Burzynski as high as the state supreme court in their failed attempt to halt his practices.

Likewise, the Food and Drug Administration engaged in four Federal Grand Juries spanning over a decade attempting to indict Dr. Burzynski, all of which ended in no finding of fault on his behalf. Finally, Dr. Burzynski was indicted in their 5th Grand Jury in 1995, resulting in two federal trials and two sets of jurors finding him not guilty of any wrongdoing. If convicted, Dr. Burzynski would have faced a maximum of 290 years in a federal prison and $18.5 million in fines.


However, what was revealed a few years after Dr. Burzynski won his freedom, helps to paint a more coherent picture regarding the true motivation of the United States government's relentless persecution of Stanislaw Burzynski, M.D., Ph.D.

Note: When Antineoplastons are approved for pubic use, it will allow a single scientist to hold an exclusive license to manufacture and sell these medicines on the open market—before they become generic—leaving PhRMA absent in profiting from the most effective gene-targeted cancer treatment the world has ever seen.

Unlike most "alternative medicine" practitioners, Stanislaw R. Burzynski has published profusely. The sheer volume of his publications impresses patients, but unless they understand what they are reading, they cannot judge its validity. To a scientist, Burzynski's literature contains clear evidence that his data do not support his claims.

Burzynski attended the Medical Academy in Lubin, Poland, where he received an M.D. degree in 1967 and an D.Msc. degree in 1968. He did not undergo specialty training in cancer or complete any other residency program. His bibliography does not mention clinical cancer research, urine, or antineoplastons during this period.

In 1970, Burzynski came to the and worked in the department of anesthesiology at , , for three years, isolating peptides from rat brains. (Peptides are low-molecular-weight compounds composed of amino acids bonded in a certain way.) He got a license to practice medicine in 1973 and, with others, received a three-year grant to study the effect of urinary peptides on the growth of cancer cells in tissue culture. The grant was not renewed.

In 1976, with no preclinical or clinical cancer research experience, Burzynski announced a theory for the cure of cancer based on his assumption that spontaneous regression occurs because natural anticancer peptides, which he named antineoplastons, "normalize" cancer cells. Since urine contains lots of peptides, he concluded that there he would find antineoplastons. Less than one year later and based only on these assumptions, Burzynski used an extract from human urine ("antineoplaston A") to treat 21 cancer patients at a clinic he opened. His shingle read, "Stanislaw R. Burzynski, M.D., Ph.D."

Burzynski's claim to a Ph.D. is questionable. When I investigated, I found:

An official from the Ministry of Health in informed me that when Burzynski was in school, medical schools did not give a Ph.D. [1].

Faculty members from at the Medical Academy at Lubin informed me that Burzynski received his D.Msc. in 1968 after completing a one-year laboratory project and passing an exam [2] and that he had done no independent research while in medical school [3].
In 1973, when Burzinski applied for a federal grant to study "antineoplaston peptides from urine," he identified himself as "Stanislaw Burzynski, M.D, D.Msc." [4]

Tracing the biochemistry involved in Burzynski's synthesis of antineoplastons shows that the substances are without value for cancer treatment.

By 1985, Burzynski said he was using eight antineoplastons to treat cancer patients. The first five, which were fractions from human urine, he called A-1 through A-5. From A-2 he made A-10, which was insoluble 3-N-phenylacetylamino piperidine 2,6-dione. He said A-10 was the anticancer peptide common to all his urine fractions. He then treated A-10 with alkali, which yielded a soluble product he named AS-2.5. Further treatment of AS-2.5 with alkali yielded a product he called AS-2.1. Burzynski is currently treating patients with what he calls "AS-2.1" and "A-10."

In reality, AS-2.1 is phenylacetic acid (PA), a potentially toxic substance produced during normal metabolism. PA is detoxified in the liver to phenylacetyl glutamine (PAG), which is excreted in the urine. When urine is heated after adding acid, the PAG loses water and becomes 3-N-phenylacetylamino piperidine 2,6-dione (PAPD), which is insoluble. Normally there is no PAPD in human urine.

What Burzynski calls "A-10" is really PAPD treated with alkali to make it soluble. But doing this does not create a soluble form of A-10. It simply reinserts water into the molecule and regenerates the PAG (Burzynski's AS-2.5). Further treatment of this with alkali breaks it down into a mixture of PA and PAG. Thus Burzynski's "AS-2.1" is nothing but a mixture of the naturally occurring substances PA and PAG.

Burzyski claims that A-10 acts by fitting into indentations in DNA. But PAG is too big a molecule to do this, and Burzynski himself has reported that PAG is ineffective against cancer [5,6].

PA may not be safe. In 1919, it was shown that PA can be toxic when ingested by normal individuals. It can also reach toxic levels in patients with phenylketonuria (PKU); and in a pregnant woman, it can cause the child in utero to suffer brain damage.

These facts indicate to me that Burzynski's claims that his "antineoplastons" are effective against cancer are not credible.

Dr. Green (1925-2007) was a biochemist who did cancer research at for 23 years. He consulted on scientific methodology and had a special interest in unproven methods. This article was adapted from his presentation at the American Association for Clinical Chemistry Symposium in in July 1997.