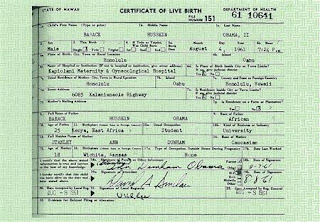 After three years of nonsense, and finally the demand made by Donald Trump making it politically impossible to stonewall any longer, President Obama has coughed up the birth certificate.  There is only one reasonable rationale for not providing this information years ago and that was to provide a sacrificial goat when the stonewalling had to end.

It is much easier to claim that your candidate is the smartest guy in the room if you never release his transcripts.  The reality is that the majority of degrees are produced by C’s and D’s for a lot of great reasons nothing to do with the wits of the student and plenty to do with how much effort the student is prepared to spend and the quality of the teacher.

The problem those who understand all this are in the minority.  It is much easier to remove it from the debate and simply repeat the mantra of how clever he is.

The fact is that withholding this information was impossible. But dragging it out forced all energy to be focused on that fight alone.  Withholding the rest is not impossible at all and we will never see those transcripts.

Responding to critics' relentless claims, President Barack Obama on Wednesday produced a detailed birth certificate in an extraordinary attempt to bury the issue of where he was born and confirm his legitimacy to hold office. He declared, "We do not have time for this kind of silliness."

By going on national TV from the White House, Obama portrayed himself as a voice of reason amid a loud, lingering debate on his birth status. Though his personal attention to the issue elevated it as never before, Obama said to Republican detractors and the media, it is time to move on to bigger issues.

Citing huge budget decisions in , Obama said, "I am confident that the American people and 's political leaders can come together in a bipartisan way and solve these problems. We always have. But we're not going to be able to do it if we are distracted."

Obama spoke shortly after the White House released a copy of the long form of his birth certificate, which contains more extensive data than a version released earlier.

The certificate says Obama was born to an American mother and Kenyan father, in , which makes him eligible to hold the office of president. Obama released a standard short form before he was elected in 2008 but requested copies of his original birth certificate from officials this week in hopes of quieting the controversy.

This handout image provided by the White House shows a copy of the long form of President Barack Obama's birth certificate from . (AP Photo/J. Scott Applewhite)
Until Wednesday, the White House had insisted that the short form certificate was the appropriate legal document confirming Obama's birth and no further proof was needed.
But so-called "birthers" opposed to Obama have kept the issue alive. Potential Republican presidential candidate Donald Trump recently began questioning why Obama hadn't ensured the long form was released.

From , Trump took credit for getting Obama to act.

"He should have done it a long time ago. I am really honored to play such a big role in hopefully, hopefully getting rid of this issue," Trump said.

Polls show large numbers of Republicans have continued to doubt Obama is a natural born citizen eligible to be president. Trump has seized on the issue as he weighs a GOP candidacy.
While Obama and White House officials avoided mentioning Trump by name, officials said they released the birth certificate partially because the issue had moved beyond fringe discussion, and Obama criticized a media culture that had not let the story go.

"This issue has been going on for two, two and a half years now. I think it started during the campaign," Obama said. "I have watched with bemusement, I've been puzzled at the degree at which this thing just kept on going."

"We're not going to be able to solve our problems if we get distracted by sideshows and carnival barkers," the president said.

He did not take any questions and did not say why the document had not been released earlier.

Many Republican leaders have sought to distance themselves from the "birther" theory as a discredited notion not worthy of national public debate.

In a statement after Obama spoke, Republican National Committee Chairman Reince Priebus called the issue a distraction — and yet blamed Obama for playing campaign politics by addressing it.

"The president ought to spend his time getting serious about repairing our economy," Priebus said. "Unfortunately his campaign politics and talk about birth certificates is distracting him from our number one priority — our economy."

The newly released certificate is signed by the delivery doctor, Obama's mother and the local registrar. His mother, then 18, signed her name () Ann Dunham Obama.

There's no mention of religion. It says his father, Barack Hussein Obama, age 25, was African and born in Kenya and his mother was Caucasian and born in Wichita, Kan. Obama's mother and the doctor signed the certificate on Aug. 7 and 8.

's registrar certified the new photocopy of the document provided to the White House on April 25, 2011.

The White House also released a letter from the president on April 22 requesting two certified copies of his original certificate of live birth. Also released was a letter from Loretta Fuddy, 's director of health, approving the request.

The president's personal counsel, Judith Corley, traveled to to pick up the documents and carried them back to on a plane. The documents arrived at the White House around 5 p.m. Tuesday.