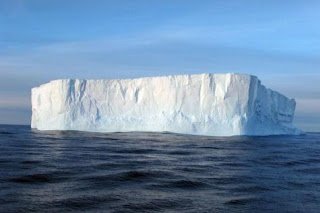 We slowly beef up our knowledge of the influence of ice on the surrounding ocean.  At least, they are accumulations of atmospheric dust and are acting as concentrators.  This results in an inevitable release of nutrients, including nitrogen, I am sure.  The surrounding ocean naturally responds to the increase.

The Southern Ice Sheet was at maximal extension and is presently contracting, yet this variation is pretty minor in terms of annual variation.

The claim it is significant in terms of the global carbon cycle is a bit of a stretch and merely reflects the obligatory bow to the gods of funding.

(PhysOrg.com) -- In a finding that has global implications for climate research, scientists have discovered that when icebergs cool and dilute the seas through which they pass for days, they also raise chlorophyll levels in the water that may in turn increase carbon dioxide absorption in the Southern Ocean.

An interdisciplinary research team supported by the National Science Foundation highlighted the research this month in the journal Nature Geosciences.

The research indicates that "iceberg transport and melting have a role in the distribution of phytoplankton in the Weddell Sea," which was previously unsuspected, said John J. Helly, director of the Laboratory for Environmental and Earth Sciences with the San Diego Supercomputer Center at the University of California, San Diego and Scripps Institution of Oceanography.

Helly was the lead author of the paper, "Cooling, Dilution and Mixing of Ocean Water by Free-drifting Icebergs in the ," which was first published in the journal Deep-Sea Research Part II.

The results indicate that icebergs are especially likely to influence phytoplankton dynamics in an area known as "Iceberg Alley," east of the Antarctic Peninsula, the portion of the continent that extends northwards toward .

The latest findings add a new dimension to previous research by the same team that altered the perception of icebergs as large, familiar, but passive, elements of the Antarctic seascape. The team previously showed that icebergs act, in effect, as ocean "oases" of nutrients for aquatic life and sea birds.

The teams's research indicates that ordinary icebergs are likely to become more prevalent in the Southern Ocean, particularly as the continues a well-documented warming trend and ice shelves disintegrate. Research also shows that these ordinary icebergs are important features of not only marine ecosystems, but even of global carbon cycling.

"These new findings amplify the team's previous discoveries about icebergs and confirm that icebergs contribute yet another, previously unsuspected, dimension of physical and biological complexity to polar ecosystems," said Roberta L. Marinelli, director of the NSF's Antarctic Organisms and Ecosystems Program.

NSF manages the U.S. Antarctic Program, through which it coordinates all scientific research and related logistics on the southernmost continent and aboard ships in the Southern Ocean.
The latest findings document a persistent change in physical and biological characteristics of surface waters after the transit of an iceberg, which has important effects on phytoplankton populations, clearly demonstrating "that icebergs influence oceanic surface waters and mixing to greater extents than previously realized," said Ronald S. Kaufmann, associate professor of marine science and environmental studies at the University of San Diego and one of the authors of the paper.

The researchers studied the effects by sampling the area around a large iceberg more than 32 kilometers (20 miles) long; the same area was surveyed again ten days later, after the iceberg had drifted away.

The new results demonstrate that icebergs provide a connection between the geophysical and biological domains that directly affects the carbon cycle in the Southern Ocean, Marinelli added.

In 2007, the same team published findings in the journal Science that icebergs serve as "hotspots" for ocean life with thriving communities of seabirds above and a web of phytoplankton, krill and fish below. At that time, the researchers reported that icebergs hold trapped terrestrial material, which they release far out at sea as they melt, a process that produces a "halo effect" with significantly increased nutrients and krill out to a radius of more than three kilometers (two miles).