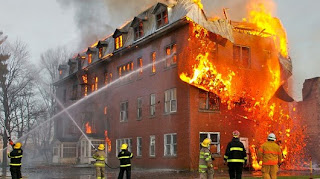 We have known this for 200 years and it looks like a first pass is producing useful knowledge and ideas.  One wonders what took so long.

Yet this should be thrown open to high school science fairs in which everyone attempts to find novel ways to manage an open flame.  It really needs to be played with to get a sense of possibility established.

The relationship with soot is intriguing and suggestive.

And yes, we suddenly have a way to directly shape and manage combustion fronts in places like engines.  That may be optimistic, but it is a new avenue for research.

Fires could be extinguished using beams of electricity

Scientists have developed a device that uses beams of electricity to extinguish flames
(Photo: Sylvain Pedneault)

It's certainly an established fact that electricity can cause fires, but today a group of Harvard scientists presented their research on the use of electricity for fighting fires. In a presentation at the 241st National Meeting & Exposition of the American Chemical Society, Dr. Ludovico Cademartiri told of how they used a unique device to shoot beams of electricity at an open flame over one foot tall. Almost immediately, he said, the flame was extinguished. On a larger scale, such a system would minimize the amount of water that needed to be sprayed into burning buildings, both saving water and limiting water damage to those buildings.

Apparently, it has been known for over 200 years that electricity affects fire – it can cause flames to change in character, or even stop burning altogether. According to Cademartiri, a postdoctoral fellow in the group of Prof. George M. Whitesides at Harvard University, what hasn't been looked into much is the science behind the relationship. It turns out that soot particles within flames can easily become charged, and therefore can cause flames to lose stability when the local electrical fields are altered.

The Harvard device consists of a 600-watt amplifier hooked up to a wand-like probe, which is what delivers the electrical beams. The researchers believe that a much lower-powered amplifier should deliver similar results, which could allow the system to worn as a backpack, by firefighters. It could also be mounted on ceilings, like current sprinkler systems, or be remotely-controlled.

Cademartiri believes the technology would work best for fires in confined spaces, such as aboard submarines, but not so much for wide-open areas like forests. As it was additionally found that electrical waves can affect the heat and distribution of flames, he also thinks their discovery could be used to boost the efficiency of devices that involve controlled combustion, such as engines, power plants, and cutting and welding torches.