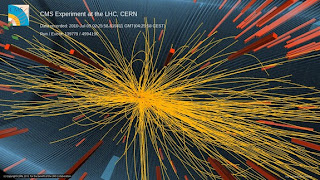 It has been a long time since a new particle showed up and this may well be and surely must be a very low probability event.  My own ruminations suggest that we are presently seeing the high energetic fraction of possible particles and that we could well have a wide range of possible particles to deal with.  We need to at least throw the door open.  It would be amusing to discover many other particles hiding under the door mat.

We now have this presently unique observation and we may wait a long time for a repetition.

A proton-proton collision at the Large Hadron Collider particle accelerator at CERN laboratory in that produced more than 100 charged particles.

In a development physicists are calling "huge," "tantalizing" and "unexpected," researchers have measured a signal that could herald a new kind of particle or force of nature.

Yet the finding is not yet conclusive, and leaves many researchers skeptical.

The discovery comes from an atom smasher called the Tevatron at the Fermilab physics laboratory in Inside the accelerator there, particles are ramped up to near the speed of light as they race around a 4 mile (6.3 km) ring. When two particles collide, they disintegrate into other exotic particles in a powerful outpouring of energy. [Wacky Physics: The Coolest Little Particles in Nature]

Scientists analyzed thousands of these collisions, and found a suspicious pattern in about 250 more cases than predicted. In these instances, the products of the collision between a proton and itsantimatter partner, the antiproton, were different than expected.

"The whole physics world is buzzing with this result," physicist David Kawall of the told LiveScience.

The discovery, first reported in the New York Times, was announced online Tuesday (April 5) when the researchers posted a preview version of their research paper on the preprint site ArXiv.org.

"This is huge — an unexpected discovery which could completely transform high-energy physics, and cosmology as well, as the two fields are joined at the hip," astrophysicist Michael S. Turner, director of the Kavli Institute for Cosmological Physics at The University of Chicago, wrote in an email to LiveScience. "But there is one big IF — if it holds up and is not explained by standard model physics."

Many researchers echoed that caveat — the discovery could be significant, but it's too soon to tell, because more data is required to confirm that the Tevatron's pattern is more than just a statistical anomaly.

"The statistical significance of the signal is interesting, but not compelling," said physicist Eugene W. Beier of the . "The experimenters need more data. If the signal does hold up at the five standard deviation level, it is an indication of something beyond the range of what we expected."

The level of statistical significance in the data now is just over three standard deviations, which means that the chance of it being a random anomaly is less than 1 in 1,000. Thus, the finding is significant, and merits investigation, but is not conclusive, researchers say. If enough further measurements are made, and the pattern holds up to five standard deviations, more physicists would likely be convinced.

"I am not convinced," said physicist Sheldon Stone. "It relies on a detailed estimate of the backgrounds and small changes could wipe out the result."

The Tevatron has been colliding protons and antiprotons since the 1980s, and has made many significant findings already, including the 1995 discovery of the top quark, an exotic version of the fundamental particles that make up protons and neutrons.

"This tantalizing result from the CDF collaboration could certainly be game changing," said Gavin Salam, a physicist at the CERN research lab in . "If it is confirmed, it would be the first time that a new particle was observed in a collider experiment since the top quark was discovered at Fermilab in 1995."

In the new finding, scientists at the Tevatron's Collider Detector at Fermilab (CDF) experiment found that the particle collisions produced a higher-than-predicted incidence of a certain pattern of byproducts: one heavy particle called a W boson, and two jets of lightweight particles with a total energy that was unexpected.

The energy of the jets could indicate that they come from a never-before-seen subatomic particle, scientists say. One of the most avidly sought theoretical particles is the so-called Higgs boson, the particle thought to bestow mass on other particles. Yet the signal the Tevatron team found does not quite match what's expected for the Higgs.

"It would be nothing like a standard Higgs boson, as the production rate is far too high," said  physicist Matt Strassler. "Beyond that, it is hard to say; we simply don't have enough information yet."

And because particles are tied to the forces of nature, the discovery could even indicate a fundamental force in addition to the known four: gravity, electromagnetism, and the strong and weak nuclear forces.

"If this is in fact the first hint of new physics to be confirmed by other measurements with higher statistics, it would be very exciting," said physicist Jamie Nagle of the of , . "Exactly how exciting depends on what new physics it turns out to be — which cannot be determined from these results alone."

The finding could also be a vindication for the Tevatron, which is planned to close in September 2011 for budget reasons. While it was once the most powerful particle accelerator on the planet, it has recently been surpassed by the new Large Hadron Collider at CERN.

If the Tevatron's discovery represents a real event, and not a blip of statistics, it will likely also be seen in the LHC. Until then, many scientists say they will reserve judgment.
For now, though, the excitement certainly continues.

"I have spent the better part of the day discussing the viability of these results and possible explanations with colleagues from around the world," said physicist Csaba Csaki. "If it indeed turns out to be the signal of a new particle, it would be extremely important, potentially 'game-changing.' However at this point I would be extremely cautious about declaring the discovery of a new particle. While the result should definitely be taken seriously, a lot more work has to be done before this can be accepted as a fact."