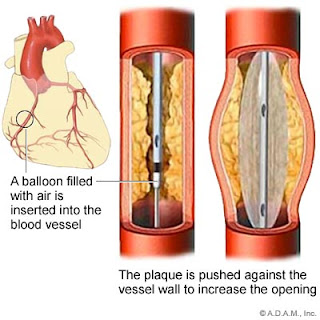 This is good news because a forearm entry will likely be handled better by the patient.  Sealing the artery after the operation is a clumsy procedure from the patient’s point of view if it uses the femoral artery.  The arm option will allow full use of the other hand to assist.  The distance is also quite a bit shorter.

I anticipate that artery entry will become routine for additional procedures in the next few years as we have plenty of trained specialists.

I also suspect that the procedure may be conducted with the patient sitting up.  That would likely be beneficial.

Alternate route to blocked arteries safe and effective for angioplasty

A landmark international study coordinated by the Population Health Research Institute of McMaster University and Health Sciences has found accessing blocked arteries through the forearm compared to groin led to fewer vascular complications and similar success rates for angioplasty.

The large, multi-centre randomized trial – the first of its kind to compare radial access and femoral access – found that both entry points for angioplasty resulted in similar outcomes, including rates of death, heart attack, stroke or non-bypass-related major bleeding. As well, radial access – or entry through the forearm – led to better outcomes in hospitals that conducted a large number of these procedures and in patients suffering heart attacks in which a coronary artery was completely blocked by a blood clot (a condition known as STEMI, or ST-segment elevation myocardial infarction).

Results of the RIVAL (RadIal Vs. femorAL access for coronary angiography or intervention) trial are being presented by Dr. Sanjit Jolly, an interventional cardiologist and assistant professor of medicine in the of Medicine, at the annual of Cardiology meeting.

The study is also being published simultaneously in The Lancet.

Estimates suggest that more than 10 million coronary angiograms are performed each year worldwide, three million of them in the . Entry through the groin, or femoral arterial access, has been the dominant route for coronary angiography and intervention for more than 20 years. It still accounts for approximately 95 per cent of procedures in the and 80 per cent of procedures worldwide.

The radial artery, accessed through the wrist, is a superficial and easily compressible site for arterial puncture, and used to avoid femoral bleeding complications. However, there have been concerns that radial access could be associated with reduced angioplasty success rates.

The RIVAL trial, conducted by researchers from 36 countries, was designed to help determine the optimal access site for invasive coronary procedures, such as angioplasty. The study involved 7,021 patients undergoing coronary angiography, with possible angioplasty, who had unstable angina or a heart attack. Patients were randomized to either radial or femoral access for their coronary angiography/intervention.

The researchers concluded both access sites are safe and effective for conducting invasive coronary procedures in patients with acute coronary syndrome, a spectrum of cardiac conditions ranging from unstable angina to heart attack.

"This is the first multi-centre international trial to address this important question," said Dr. Shamir Mehta, a RIVAL co-investigator, interventional cardiologist, and associate professor of medicine in the of Medicine.

"Given the results of previous small trials, we were surprised to not find a difference between the two strategies for the primary outcome. This means either a radial or femoral approach can be used safely and effectively."

Provided by
Posted by arclein at 12:01 AM

I've wondered about this for years. I worked on a cardiac rehab floor in the 70's and 80's and on rare occasions they would do a radial angio.
I have had two myself in 20 years.
I'm not sure about sitting up because of blood pressure issues and that current equipment might not be configurable for a sitting position.
There may also be issues of whether that position would alter the visualization of the heart. I do know that position can sometimes effect it.
Blessings