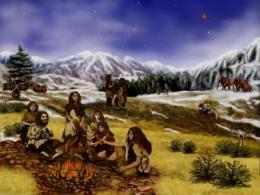 This debate does get tiresome.  Both types of humanity lost their robust jaws because they were suddenly able to cook food.  One implies the other and it appears that the transition is then pretty quick.

The presence of an earlier version of humanity either implies the use of fire or possibly the retention of a fur coat as we see in reports of the Sasquatch. Take your choice.

In the event, the Neanderthal was conducting itself in much the same way as humanity and today we simply do not know how they truly differed in actual behavior.

My personal choice is that humanity simply learned superior socialization skills leading to the formation of clans and tribes.  The resultant population expansion then placed them in position to absorb the Neanderthals into the human genetic pool as a minority contributor.  We have actually seen this occur in large part with the East Coast Indians impacted by expanding European settlement.  In practice, it continues to this day with every interracial marriage.

I would guess that white skin and red hair are key Neanderthal characteristics and the ancient brow ridge and semi robust jaw was simply selected out.

A new study involving the of shows clear evidence of the continuous control of fire by Neanderthals in dating back roughly 400,000 years, yet another indication that they weren't dimwitted brutes as often portrayed.

The conclusion comes from the study of scores of ancient archaeological research sites in Europe that show convincing evidence of long-term fire control by Neanderthals, said Paola Villa, a curator at the University of Colorado Museum of Natural History. Villa co-authored a paper on the new study with Professor Wil Roebroeks of in the .

"Until now, many scientists have thought Neanderthals had some fires but did not have continuous use of fire," said Villa. "We were not expecting to find a record of so many Neanderthal sites exhibiting such good evidence of the sustained use of fire over time."

A paper on the subject was published in the March 14 issue of the Proceedings of the National Academy of Sciences.

Archaeologists consider the emergence of stone tool manufacturing and the control of fire as the two hallmark events in the technological evolution of early humans. While experts agree the origins of stone tools date back at least 2.5 million years in , the origin of fire control has been a prolonged and heated debate.

Villa and Roebroeks, who together speak and read six languages, have visited or worked at dozens of the Neanderthal excavation sites in . They also combed libraries throughout Europe and the for research papers on evidence for early fire use in , contacting researchers involved in the excavations when possible for additional information and insight.

As part of the study they created a database of 141 potential fireplace sites in dating from 1.2 million years ago to 35,000 years ago, assigning an index of confidence to each site. Evidence for the sustained use of fire includes the presence of charcoal, heated stone artifacts, burned bones, heated sediments, hearths and rough dates obtained from heated stone artifacts. Sites with two or more of the characteristics were interpreted as solid evidence for the control of fire by the inhabitants.

The second major finding in the PNAS study -- perhaps even more surprising than the first -- was that Neanderthal predecessors pushed into Europe's colder northern latitudes more than 800,000 years ago without the habitual control of fire, said Roebroecks. Archaeologists have long believed the control of fire was necessary for migrating early humans as a way to reduce their energy loss during winters when temperatures plunged below freezing and resources became more scarce.

"This confirms a suspicion we had that went against the opinions of most scientists, who believed it was impossible for humans to penetrate into cold, temperate regions without fire," Villa said.

Recent evidence from an 800,000-year-old site in known as Happisburgh indicates hominids -- likely Homo heidelbergenis, the forerunner of Neanderthals -- adapted to chilly environments in the region without fire, Roebroeks said.

The simplest explanation is that there was no habitual use of fire by early humans prior to roughly 400,000 years ago, indicating that fire was not an essential component of the behavior of the first occupants of Europe's northern latitudes, said Roebroeks. "It is difficult to imagine these people occupying very cold climates without fire, yet this seems to be the case."

While the oldest traces of human presence in Europe date to more than 1 million years ago, the earliest evidence of habitual Neanderthal fire use comes from the Beeches Pit site in dating to roughly 400,000 years ago, said Villa. The site contained scattered pieces of heated flint, evidence of burned bones at high temperatures, and individual pockets of previously heated sediments. Neanderthals, like other early humans, created and used a unique potpourri of stone tools, evidence that they were the ancient inhabitants of particular sites in .

The sites catalogued by the team were dated by several methods, including electron spin resonance, paleomagnetism and thermoluminescence. Some research teams also have used microscopic studies of sediment at sites to confirm the presence of ashes. While some of the best evidence for controlled use of fire in comes from caves, there are many open-air sites with solid evidence of controlled fire, they said.

According to Villa, one of the most spectacular uses of fire by Neanderthals was in the production of a sticky liquid called pitch from the bark of birch trees that was used by Neanderthals to haft, or fit wooden shafts on, stone tools. Since the only way to create pitch from the trees is to burn bark peels in the absence of air, archaeologists surmise Neanderthals dug holes in the ground, inserted birch bark peels, lit them and covered the hole tightly with stones to block incoming air.

"This means Neanderthals were not only able to use naturally occurring adhesive gums as part of their daily lives, they were actually able to manufacture their own," Villa said. "For those who say Neanderthals did not have elevated mental capacities, I think this is good evidence to the contrary."

Many archaeologists believe Neanderthals and other early hominids struck pieces of flint with chunks of iron pyrite to create the sparks that made fire and may well have conserved and transported fire from site to site.

Some anthropologists have proposed that Neanderthals became extinct because their cognitive abilities were inferior, including a lack of long-term planning, said Villa. But the archaeological record shows Neanderthals drove herds of big game animals into dead-end ravines and ambushed them, as evidenced by repeatedly used kill sites -- a sign of long-term planning and coordination among hunters, she said.

Recent findings have even indicated Neanderthals were cooking, as evidenced by tiny bits of cooked plant material recovered from their teeth.
Provided by of at (news : web)