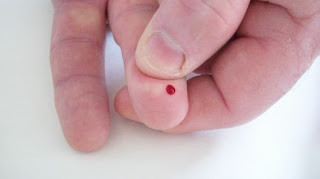 The promise of this approach was apparent in the mid eighties but was never advanced because it was simply too early.  I participated in a startup at the time trying to make it all happen.  No matter, we now are on the way to having a pin prick blood test able to discern prostate cancer.

Right behind that we should be able to produce similar tests for each and every cancer type.  Perhaps in the end we will end up with a hand held testing device which is able to read out the results then and there.  Dr McCoy would be pleased.

Once this falls into place, a check up at proscribed times should allow all cancers to be tackled very early in their careers when they can be readily cured.  Discovery through secondary effects has proven to be mostly too little and too late.

All told, this is good news for the war on cnacer.

A new interdisciplinary breakthrough could see cancer being diagnosed through a quick finger-prick test. After five years of research, the team of biologists, clinical oncologists, pathologists and information scientists from ETH Zurich, University Hospital Zurich and the Cantonal Hospital of St. Gallen have determined a biomarker for prostate cancer – a particular pattern of proteins in the blood that indicate the presence of cancerous disease.

A common precursor to prostate cancer in both mice and men is the inactivation of the "Pten" gene, which can lead to uncontrolled cell growth. Thus mouse models were used in the hope that subsequent steps would be common between species. The researchers began by examining prostate surface proteins and comparing protein sets in both healthy and cancerous mice that had developed the disease following Pten inactivation. From this they determined a pattern of proteins that is typical of the mutated version of Pten and thus also for prostate cancer.

Examining tissues and serum samples from human prostate cancer sufferers and a control group, and using the list of specific proteins drawn up using the mouse model, the scientists were able to identify 39 corresponding proteins in humans that indicated the presence of cancer. The information scientists then calculated the four most reliable proteins as cancer indicators using 20,000 models.

"We then used this biomarker pattern to examine a cohort of patients whose blood had never previously been analyzed," says Wilhelm Krek, professor of Cell Biology at ETH . "We were able to predict with precision, stability and reproducibility whether they were suffering from prostate cancer."

It is presumed that the onset of cancer is often triggered by a mutation, such as the deactivation of a gene, which can lead to a change in the protein pattern of the affected organ. Separating off surface proteins of certain tissues allows 20 percent of these protein patterns to be detected in the serum, allowing a reliable method of diagnosis.

Currently, cancer is diagnosed by tumor antigens in the blood, but these methods are often misleading and can involve expensive and painful biopsies.

The identification of a reliable biomarker that indicates cancer has been the subject of advanced studies by scientists for many years, but often other factors were found to skew the results. "The protein patterns that were determined may have reflected the patients' eating habits, but were unable to provide any indication about whether or not a cancerous disease was present," explains Krek. By contrast, the biomarker pattern method is extremely precise, and even conveys information about the type of tumor which helps to identify the best therapy to combat it. Other cancer

The biomarker signature needs to be validated in further clinical trials, and the ETH spin-off company Proteomedix AG is currently developing a diagnosis kit. However it is hoped that the study can be applied to other forms of cancer, bringing better early detection and more focused therapy. The collaborative work by the interdisciplinary team highlights the progress that can be made when groups of scientists work together. The work is to be published in the next issue of PNAS.