Looking Inside the San Andreas 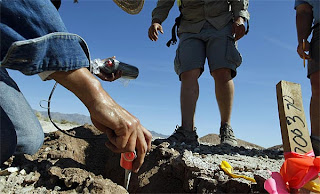 This is another advance in the collecting of earthquake related data and will be interesting.  Sooner or later we will have three dimensional seismic the entire length of the fault and perhaps some form of continuous updating.  All this will put us a lot closer to having enough data to plausibly monitor quakes when they happen and that will make it possible to start putting predictive ideas in place.

High quality three D seismic has become standard in the oil industry over the past decade or so and 4000 sensors will do nicely.

Anyway, it is all good stuff.

Looking inside the San Andreas

Scientists believe a new study of the within the Salton Trough could change assumptions about the eventual Big One.

Geologist Angel Olguin jams a seismic sensor in a shallow trough scraped in the desert floor near the . This and thousands of other sensors will record seismic waves from detonated explosives to "map" the and other features of the Earth's crust below. (Don Bartletti / Times)

Reporting from the Salton Sea -- Three days after the earthquake and tsunami devastated northeastern Japan, Gary Fuis walked across the under a moonlit sky. The desert was quiet. A breeze fanned through the creosote. To the west, he could see the , and to the east, the headlamps of the night crew taking up their positions.


In a little more than an hour, they would start detonating their explosives, generating seismic waves that would be recorded by seismometers buried throughout these sandy hills and positioned on the floor of the .


A geophysicist with the United States Geological Survey, Fuis is overseeing an ambitious project to create an underground image of one of the most seismically active and geologically complex regions of the country, a triangle of land extending from Palm Springs to the Mexico border.


This work, he believes, will change current assumptions about the earthquakes that originate here, especially the Big One expected on the . For nearly three weeks his teams have worked night and day to cover hundreds of miles and position thousands of instruments.


Fuis, 67, sat on the top of a ridge and took out his dinner, a ham and jalapeno sandwich. From here, he would be able to stay in touch with the crew by two-way radio and cellphone in case any problems or confusion arose during the night.


A voice broke over the radio.


A freight speeding along the shore of the lake would interfere with the readings from the detonations, and they'd have to wait until it passed.


Fuis looked south toward Bombay Beach, a community of small homes and double-wide trailers on the edge of the Salton Sea, where the begins its jagged 800-mile course toward the Mendocino coast.


Three years ago, seismologists imagined the effect of a magnitude 7.8 earthquake with an epicenter less than a mile from where he sat. Their scenario had the full force of the temblor reaching the  in less than two minutes. The shaking would extend as far north as .


The model was based on the last rupture of the San Andreas in this region, dated more than 300 years ago by recent geological studies. Because this stretch of the fault — from to the — has not moved since then, it is considered especially vulnerable to a major earthquake.


Fuis describes the fault with dispassionate conviction. It is "near failure," he says, though he believes the seismologists' predictions may not be accurate. Whether the destruction will be worse or not, he's not certain. He just knows that some conclusions have been drawn without enough information.


"Neither the shape of the nor the sedimentary basins that the cities have been built upon are well enough understood to provide accurate calculations of the shaking," he said.


The chatter on his radio picked up.

Earlier that morning, just as the sun was rising, the day crew gathered at a warehouse in .


The Salton Seismic Imaging Project is funded with a $1.2-million grant from the National Science Foundation. Additional money comes from the Geological Survey. The first findings of the study will be released in September.


Similar research in the 1990s looked at the and the San Andreas north of the The results showed a number of faults lying deep beneath Los Angeles that are capable of producing dangerous earthquakes like the one that caused the Northridge earthquake in 1994.


By detonating explosives and measuring the speed of the seismic waves as they move horizontally and vertically underground, seismologists can assemble images of the crust of the Earth, capturing structures like fault lines.


The project was three years in the planning, and the field work got underway late February. During public hearings, Fuis had fielded concerns from residents and local officials who worried that the explosions might set off earthquakes. Rock quarries, he told them, conduct similar blasts without any consequence.


Then less than 24 hours after the earthquake in , the fears arose again. Residents worried about earthquakes, damaged buildings and tainted ground water. An aide to Rep. Mary Bono Mack, whose district includes the Coachella and Imperial valleys, called the Geological Survey for reassurance.


Now with only six days left, Hole wanted to make sure everyone stayed focused. So far, they had put out more than 4,000 seismometers, and the night crew had set off more than 100 explosions.


"This is huge," he reminded them, "the largest project of its kind."


On the wall behind him was a map of , showing the precisely delineated routes that crews followed, traversing wilderness areas, military installations, Indian reservations, private property and cities. Scripps Institute of Oceanography set up its own equipment in the .


Penetrated by volcanoes and cut by the San Andreas and Imperial faults, the region is part of the Salton Trough, one of the few rift valleys in the world not covered by an ocean, a place where geologists can see the continent coming apart and a new crust of the Earth being formed.


These processes are the result of the Pacific and North American plates sliding against each other for nearly 6 million years, an action that triggers the earthquakes in the region.


Toting 40-pound packs in 80-degree heat, the day crew covered a five-mile route. About every 50 yards, they stopped at mapped locations, dug a trench about a foot deep and buried a seismometer and geophone.


By mid-afternoon, the night crew parked their SUVs, pick-ups and an enclosed truck between the Union Pacific tracks and 111, just north of the line. The 16 blast sites had already been dug; Fuis and the crew needed to wire the detonators to the explosives and lower the explosives into the blast holes, in most cases 15 feet deep.


Fuis stuffed three boxes of detonators and a bottle of water into his day pack and headed out. He began working for the Geological Survey in the mid-1960s. As a student, he had been interested in planetary science but realized that he would never touch the rocks he was studying. Peering into the Earth intrigued him more.


"What got a lot of us into the earthquake business," he says, "was the hope we could predict earthquakes — and we still have this hope. In the meantime we have had to start working on something that's practical to the public, namely how to predict earthquake effects."

Standing roadside, Fuis talked easily about "planar distributions of hypocenters," "sedimentary velocities," P waves and S waves. When he described the and the motion of the two tectonic plates, his hands took flight.


"The San Andreas fault actually appears to be propeller shaped," he said, drawing a pirouette in the air and describing how the fault tilts to the northeast in this basin, then tilts in the opposite direction father north, past the Mojave Desert.


The implications for and especially the Coachella and Imperial valleys are significant, whether assessing building standards or establishing emergency preparedness procedures. Past modeling of earthquakes in the region has used a vertical fault in most places, but angled faults focus energy differently, with the overriding plate sustaining most of the damage.


But a greater threat, according to Fuis, is the sedimentary structure of the Salton Trough itself. Excavate this basin of the rocks and soil swept down over the millenniums from the Rocky Mountains and you'd have a canyon larger than the .


This formation — sediment nearly nine miles deep — can trap earthquake energy and amplify the seismic waves, resulting in longer and more intense shaking. No one has measured the wave speeds throughout the basin until now.


By midnight, Fuis was chilled. Orion angled behind the Santa Rosa Mountains, and a cool breeze came in from the east.


For the last hour he had been following the progress of his explosives handlers as they moved from one blast site to the next. Each team had to follow a rigorous schedule that kept them from firing at the same time and distorting the readings.


Coyn Criley and Joe Svitek were running late for their 1 a.m. detonation. Their first blast had taken longer than expected, and Svitek spooled out 200 feet of wire to the clearing where the explosives were buried. He and Criley spliced it to the detonators, connecting the circuit.


With two minutes remaining, they retreated to the shooting box, a small yellow briefcase that contained a clock and the battery that would initiate the explosion. At 25 seconds, Criley pushed the charge button. An orange light started flashing. At 15 seconds, he pushed the arm button.

A sharp jolt and a fast undulation raced through the sandy soil.


Fuis heard the blast from the ridge. By then the seismic waves, racing at three miles a second, had already passed beneath him and were dissipating in the distance. The geophones had captured the ground motion; the seismometers recorded the impulse; and soon the information would join the rest of the data, one piece in the larger puzzle.


One day, Fuis knew, another sort of wave would start from this place, and it wouldn't fade so quickly.
Posted by arclein at 12:01 AM