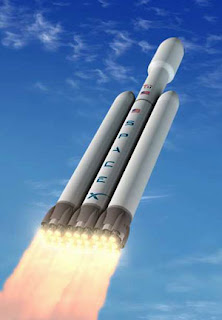 I am afraid we will have to pay attention to what is really happening in the rocket business.  The hard technical problems are long solved and all that expensive engineering design is wonderfully computerized allowing rapid metal cutting and a collapsed time frame for delivery of a new bird.

We need the new birds. NASA has exited the space shuttle business although we will now see craft able to deliver a couple of astronauts to the space station which is good enough when you also deliver by separate lifter a fifty ton payload.  I think this system is naturally a safer and obviously cheaper way to sustain a low orbit development program.

The next five years promises to be the golden age of space rocketry.  Not only is private industry rolling up its sleeves, but a whole range of national programs are also hitting their stride.  They all can get into low earth orbit and stay a while. 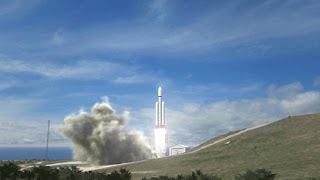 The Falcon Heavy Lifts Off via SpaceX

Private spaceflight concern SpaceX has been teasing the public for more than a week with rumblings of a big announcement today. Indeed, that announcement is big: about 22 stories big. SpaceX founder Elon Musk today unveiled the company’s next big thing, the Falcon Heavy rocket, a massive launch vehicle with a cargo capacity of 117,000 pounds.

SpaceX already has a deal inked with NASA to become the first private space agency to resupply the International Space Station using its smaller Falcon 9 rocket and Dragon capsule. The 27-engine Falcon Heavy, however, is aimed at hurling large government and commercial payloads into Earth orbit, and to do it on the (relatively) cheap.

By large payloads, we mean very large. The 227-foot Falcon Heavy booster is currently under construction at SpaceX’s HQ, and when complete it will dwarf anything rivals can throw at it. The closest analog from NASA’s heavy-lift heyday would be the Saturn V, the rocket that carried the Apollo program to the moon. The closest thing the private sector can offer by way of comparison is United Launch ’s Delta IV, a 50,000-pound capacity booster which currently launches the Pentagon’s heavy payloads for up to $275 million per launch.

The Falcon Heavy, SpaceX says, offers a clear-cut cost advantage. For just $80-125 million, customers can get more than twice the payload into orbit aboard a Falcon Heavy. That, according to Musk, is a new world record for cost per pound to orbit.

Of course, it’s easier to name a competitive price point before your rocket is completed than afterward when all the costs are tallied. Still, with a capacity like the Falcon Heavy’s SpaceX should have no problem selling cargo space assuming costs don’t spiral wildly out of control. That’s exciting, not only because it bodes well for the private space industry and for companies looking for a lower cost of entry into Earth orbit, but because for the first time in a long time we’re going to see something as awesomely powerful as the mighty Saturn V take to the launchpad.

When will that be? SpaceX aims to launch their new heavy-lifter in a demo flight from ’s Vandenberg AFB by end of next year.

With new rocket, SpaceX is poised to make a giant leap

Space Exploration Technologies, the company that is reshaping the space industry, plans to announce the development of a massive 22-story rocket to launch military and commercial payloads into orbit.

Work is quietly underway in the South Bay on a massive 22-story rocket whose power is rivaled in the U.S. only by the mighty Saturn V rocket, which took man to the moon, in a risky private venture that could herald a new era in space flight.


Dubbed Falcon Heavy, the 27-engine booster is being assembled by rocket maker Space Exploration Technologies Corp., or SpaceX, at its sprawling complex in where it has about 1,100 workers.


The rocket, which has twice the lifting capability of the next largest launcher built by a company, is being announced Tuesday at the National Press Club in .


"We're embarking on something that's unprecedented in the space industry," Elon Musk, the company's chief executive, told The Times. "This is territory that has only belonged to the government — with its tens of billions of dollars."


Musk's company is building the 227-foot-tall Falcon Heavy even though there are no guarantees that the military orNASA will step forward to pay for the rocket to lift its payloads — or even astronauts — into space someday.


SpaceX hopes to launch it in a demonstration flight from Vandenberg Air Force Base, northwest of Santa Barbara, at the end of next year.


The undertaking to be announced by Musk was hyped all last week on the Internet with a video laden with fiery blast-offs proclaiming "Something new is coming. 4.5.11." The 30-second clip highlighted SpaceX's recent launches, boasted that the work was done "at a fraction of the cost" and asked "What's next?"


The video and Tuesday's announcement underscored the unique role that SpaceX hopes to play in shaping the nation's future in space. Launches on the Falcon Heavy would cost from $80 million to $125 million. The company is paying for development costs of the rocket, Musk said, in anticipation that if it builds it, customers will come.


In December, SpaceX became the first private company to blast a spacecraft into Earth's orbit and have it return intact.


The unmanned flight was intended to show NASA that SpaceX could handle the task of carrying cargo into space.


With federal money in short supply, the government is expected to turn to private industry to play a bigger role in building rockets, carrying cargo, running space missions and possibly carrying astronauts to the International Space Station.


SpaceX's selling point is its low price per launch.


The approach has worked. NASA has already invested $298 million in seed money to help SpaceX develop and build its smaller nine-engine Falcon 9 rocket and its Dragon space capsule. The space agency has awarded the company a $1.6-billion contract to have SpaceX's Dragon transport cargo to the space station — with trips possibly starting later this year.


SpaceX has also signed lucrative deals with commercial satellite makers to lift their precious hardware into space. The company's backlog includes the largest commercial deal of its kind: a $492-million contract with telecommunications company Iridium Communications Inc. of

"The Falcon Heavy is going to open more markets."


SpaceX does not have a contract with the Air Force, which handles communications and spy satellites launches, or the National Reconnaissance Office, the secretive federal umbrella agency that operates spy satellites.


Musk said the Falcon Heavy will change that.


"The Air Force has expressed interest," he said. "I'm very confident that we will have a deal by the time of the Falcon Heavy demo flight."


The Pentagon currently has only has one launch provider, United Launch Alliance, a joint venture of Lockheed Martin Corp. and Boeing Co. The company's Delta IV Heavy is the vehicle that lifts its $1-billion satellites into space. It is the nation's largest unmanned rocket, capable of lifting a maximum payload of about 50,000 pounds into low earth orbit. Each rocket costs up to $275 million, the Federal Aviation Administration estimated.

The Falcon Heavy will give the Pentagon another option, Musk said, by being able to lift 117,000 pounds to low Earth orbit and sell for a fraction of the price, Musk said.


"There's no point in matching the competition," he said. "We want to steamroll them. We're trying to make this a complete no-brainer."


SpaceX said it can keep its costs down because it manufacturers almost all of its parts in-house, mostly in a complex in where fuselages for Boeing's 747 jumbo jet were once assembled.


Much like the early days of NASA, the company has a cadre of young engineers — the average age is in the early 30s — who work for a fraction of the salary they could make at larger aerospace companies. They work for SpaceX because it operates more like a start-up than an entrenched rocket builder.


Visitors at SpaceX headquarters are more likely to see an engineer wearing a hoodie or a baseball cap than sporting horn-rimmed glasses and a crew cut.


That's by design. Musk, 39, came from the . He started SpaceX after making a fortune when he sold online payment business PayPal Inc. in 2002. Armed with his personal fortune and venture capitalist contacts, he started SpaceX.


"The best and brightest want to work for them right out of school," said Jay Gullish, a space and telecommunications analyst at Futron Corp., a , firm. "They're doing things that in the private sector has never been done before."


Indeed. The last U.S.-built rocket more powerful than the Falcon Heavy was the Saturn V. At the time, rocket pioneer Wernher von Braun oversaw the development of NASA's Apollo missions. That rocket was 350 feet tall and had twice the lifting power of the Falcon Heavy.


Musk envisions a day when the Falcon Heavy not only launches satellites but also carries robots and astronauts to Mars.


"Other than the Saturn V, this is the most capable launcher in history," Musk said. "When this thing goes off, it will be pretty epic."


william.hennigan@latimes.com
Posted by arclein at 12:01 AM