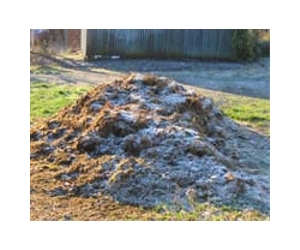 I hate to get started on what is wrong about most manure application systems.  The classic system got the manure out on the fields in the off season and this allowed Mother Nature to have time to integrate the manure into the soils.

The best fix for all this is to blend in a biochar fraction of say ten percent to adsorb free nutrients for later usage.  We will in the end do just that once biochar is better understood.

In the meantime, over rich manure must be sprayed on the fields and the nutrient surplus is washed away out of reach.

Blending fresh manure with biochar may actually allow the reduction of the manure itself to be accelerated in the heap itself without any fear of nutrient losses.  Work needs to be done with that.

Manure has long been used as a crop fertilizer, but the challenge of finding an efficient use of the nutrients found in manure is ever present. The ratio of nitrogen to phosphorus in manure is low in relation to the nutrient needs of most crops.

Therefore, crops tend to be overloaded with manure to meet the nitrogen requirement of agricultural crops, but the excess phosphorus from the process can damage the environment.

In a study funded by agriculture and Agri-Food Canada, scientists at the Pacific Agri-Food Research Centre in Agassiz, British Colombia, with collaborators in Quebec City, Quebec, and Brandon, Manitoba tested the effectiveness of removing solids from dairy manure to improve yield by increasing the nitrogen to phosphorus ratio and reducing the loss of nitrogen by hastening soil infiltration.

Solids were removed from the manure slurry in a passive two stage lagoon system, which resulted in the liquid fraction containing less dry matter and a higher nitrogen to phosphorus ratio than whole manure.

The results from the six­-year study indicated that the liquid fraction allowed for a higher crop yield and 63% more nitrogen recovery than whole manure at equal application rates.

These benefits were the most apparent in the mid-season harvests when dry summer weather conditions accelerate nitrogen loss through ammonia volatilization.

The slurry's higher nitrogen to phosphorus ratio prevented the soil from becoming overloaded with phosphorus.

Shabtai Bittman, the principal author of the study, said, "The efficacy of the dairy slurry nitrogen was greatly improved by low-cost removal of slurry solids even when using a low-emission application technique. This significantly advances the cause of efficient use of manure nutrient by crops."

The full study is published in the January/February 2011 issue of the Journal of Environmental Quality.