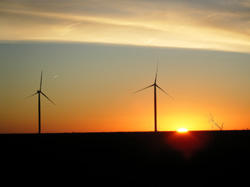 This is the first serious delivery of a major utility grade battery complex that I have seen.  Obviously it will focus as an industry on the wind mill sector for a while.  As I have repeatedly posted, windmills in particular need to be linked to some form of efficient energy storage.  I am expecting excellent solutions to arrive on the market, but these guys have  the advantage of first delivery.

The grid needs two basic technological fixes to make real economic sense, both of which are now in place.  Energy storage is an obvious one, the more efficient the better.  The other has been practical super conducting cable and equipment which is now just starting to come out of the factories.

However you do the calculations, these new technologies will at least double our supply of available energy and utility storage will plausibly redouble it again by optimizing distribution.  Distribution efficiencies through the next level of superconducting technology will surely grab most of the remaining wastage.

What I am saying is that over the next decade we can look forward to increasing our power availability five fold without building any additional power output which is a stunning idea.  On top of that .industrial users will be also converting to superconducting motors and halving their power consumption just as fast.

So before we factor in the advent of the new Rossi Focardi heat engines to replace all heat based power plants, a power revolution is now fully under way. 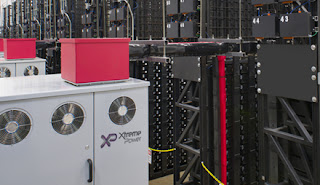 They like to do things big in , so it's no surprise that the Lone Star state will launch the world's largest wind battery storage project.

Duke Energy is not a Texas company, but it owns the aptly named Notrees wind farm in the panhandle. The power giant is teaming up with an area startup called Xtreme Power to install a 36-megawatt battery at the 153-megawatt Notrees Windpower Project near .

That's one big battery. Such technology is likely to become crucial as wind farms become ever larger but erratic suppliers of electricity to the grid. In wind-blown , the region's massive turbine farms can generate more electricity than the grid can handle at some times while all but ceasing production at other times. That creates headaches for grid operators, and the ability to store wind energy and release it when needed would help smooth out the ebbs and flows of the electricity stream.

"This system will store excess wind energy and discharge it whenever demand for electricity is highest -- not just when wind turbine blades are turning. In addition to increasing the supply of renewable energy during periods of peak demand," Duke said in a statement.

grid operators will probably be watching the experiment closely. That region boasts abundant hydropower and huge wind farms, which has created situations when there's a surplus of both wind and water power and insufficient capacity on transmission lines to offload the electricity. Batteries would help, though it probably would take huge banks of them to have a significant impact.

The federal government is obviously interested in the technology. The Department of Energy has thrown in $22 million for the project, with Duke matching the grant with another $22 million.

Duke and Xtreme plan to plug in the battery by late 2012. 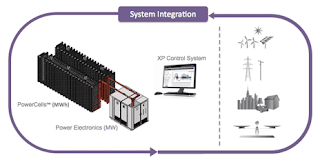 http://www.xtremepower.com/xp-technology/dynamic-power-resources.php
Xtreme Power's breakthrough Dynamic Power Resource™ (DPR™) is a fully-integrated energy storage and digital power management solution. DPRs™ consist of safe and efficient PowerCells™ combined with high performance power electronics and a configurable control system, with each component sized to address each customer’s individual power and energy needs. XP integrates all key components into a large-scale, utility-ready system that operates with a customer’s existing or planned infrastructure. From project definition through system operation, customers benefit from having one point of contact.

Proven by rigorous testing in XP’s in-house 7.5 MW / 7 MWh test facility and extensive field operational hours, the DPR™ is capable of so much more than just storing off-peak energy for on-peak use. Customers see the best Returns on Investment when they can take advantage of multiple services, and therefore multiple revenue streams.

Fully integrated energy storage and digital power management system
One product for a number of applications, with or without grid connection
Faster and more accurate than competing energy storage technologies
Modular approach that allows scaling without compromising reliability
Size flexibility with both power and energy components for individual project needs
Able to supply and absorb both real and reactive power
Safe and environmentally superior to current alternatives
Round-trip efficiency approximately 90%, varying slightly by application
Competitive total cost of ownership

After more than two decades of R&D, XP's PowerCell™ raises the bar for electrical energy storage technology. The PowerCell™ is a 12 volt, 1 kWh, dry cell battery technology with a very innovative design. Metal alloy-coated, ballistic grade fibers are woven together to offer structural integrity, as well as multiple pathways for ultra-low impedance current flow both in and out of the battery. Proprietary formulas of fundamental alloys, such as copper, lead and tellurium, are used to form bi-polar plates that provide a massive surface area at the nano-scale for the chemical reaction to take place, resulting in an extremely low internal resistance.

The highly uniform characteristics of PowerCells™ allow thousands to be assembled in massive parallel and series matrices, ideally suited for use in large-scale utility applications that require tens of megawatts of power while still maintaining a manageable footprint.  The PowerCell™'s low internal resistance results in high power retention (approximately 98% efficiency) and the ability to rapidly charge and discharge large amounts of power.

Because PowerCells™ are a benign technology, they are non-hazmat rated which means they can be transported using traditional methods, require no special handling or documentation, and do not have any special siting requirements. PowerCells™ are also highly recyclable, and XP ensures that PowerCells™ are properly recycled at the end of their life. Unlike most competitive energy storage technologies, PowerCells™ maintain a near ambient temperature while being exercised, which eliminates many of the risks associated with other battery technologies.

Energy like a battery; Power like a capacitor
Low internal resistance provides high instant power capability, high efficiency, and operation at ambient temperature
Performs thousands to millions of cycles over a broad range of changes in SOC
Non-Hazmat rated and no special permitting required
98% of materials recovered and recycled

It's great to see you dig into this industry to show the potential of cost effective energy solutions.
From your math, I'm wondring why independant companys have not jumped head-long into this to be the first established and build early branding on this technology?
Bruce

Utility grade technology faces huge entry costs, not unlike defense industry work. Possible but needing huge investment and long time lines. It is unsurprising that the first reported generator application is coming out of Japan for use in ships and are huge. However, the key components now exist and are soon deliverable. That opens up the field for second tier development and we can expect all this to boom.