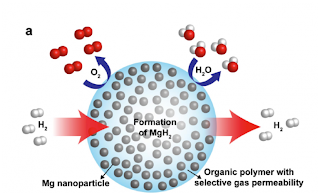 Here is another solid effort showing some success.  At least they have something not needing excessive temperature work.  Again it appears promising and we will wait and see were this goes.

Actual storage capacity is not understood here as yet.

Scientists from the U.S. Department of Energy's Lawrence Berkeley National Laboratory have created a composite material that they claim can store hydrogen densely and safely, yet that also allows it to be easily accessed for creating electricity. Some materials that are currently used for hydrogen storage have a relatively small capacity, and need to be superheated or supercooled in order to work at peak efficiency. The new material, however, is said not to have either of these limitations.

The Berkeley Lab researchers created the pliable nanocomposite from a matrix of polymethyl methacrylate, which is a polymer related to Plexiglas, with nanoparticles of magnesium sprinkled throughout. It reportedly is able to absorb and release hydrogen at "modest temperatures," without oxidizing the magnesium after cycling.

To confirm that hydrogen was present within the magnesium, the researchers observed the nanoparticles through the world's most powerful transmission electron microscope, the TEAM 0.5 – also located at Berkeley Lab.

"This work showcases our ability to design composite nanoscale materials that overcome fundamental thermodynamic and kinetic barriers to realize a materials combination that has been very elusive historically," said Jeff Urban, Deputy Director of the Inorganic Nanostructures Facility at Berkeley Lab's Molecular Foundry. "Moreover, we are able to productively leverage the unique properties of both the polymer and nanoparticle in this new composite material, which may have broad applicability to related problems in other areas of energy research."

The team's findings were recently published in the journal Nature Materials.

Hydrogen is a promising alternative energy carrier that can potentially facilitate the transition from fossil fuels to sources of clean energy because of its prominent advantages such as high energy density (142 MJ kg−1; ref. 1), great variety of potential sources (for example water, biomass, organic matter), light weight, and low environmental impact (water is the sole combustion product). However, there remains a challenge to produce a material capable of simultaneously optimizing two conflicting criteria—absorbing hydrogen strongly enough to form a stable thermodynamic state, but weakly enough to release it on-demand with a small temperature rise. Many materials under development, including metal–organic frameworks2, nanoporous polymers3, and other carbon-based materials4, physisorb only a small amount of hydrogen (typically 1–2 wt%) at room temperature. Metal hydrides were traditionally thought to be unsuitable materials because of their high bond formation enthalpies (for example MgH2 has a ΔHf∼75 kJ mol−1), thus requiring unacceptably high release temperatures5 resulting in low energy efficiency. However, recent theoretical calculations6, 7 and metal-catalysed thin-film studies8 have shown that microstructuring of these materials can enhance the kinetics by decreasing diffusion path lengths for hydrogen and decreasing the required thickness of the poorly permeable hydride layer that forms during absorption. Here, we report the synthesis of an air-stable composite material that consists of metallic Mgnanocrystals (NCs) in a gas-barrier polymer matrix that enables both the storage of a high density of hydrogen(up to 6 wt% of Mg, 4 wt% for the composite) and rapid kinetics (loading in <30 min at 200 °C). Moreover, nanostructuring of the Mg provides rapid storage kinetics without using expensive heavy-metal catalysts.
Posted by arclein at 12:01 AM