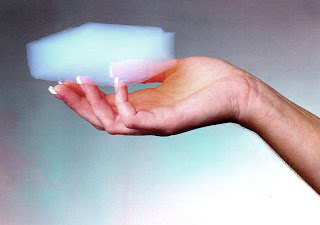 They have now managed to produce an aerogel out of carbon nanotubes which likely takes the resultant material close to the real limits for such materials.

None of this was even imagined not so long ago.

We are seeing a wide range of new possibilities emerge and most today are wonderful solution looking for problems to solve.  Something needs to get the application work started.  Perhaps we can use this to support structural work in a large airship.  It certainly looks able to provide core strength for stress skin structures.  An air ship skin composed of two monofilaments sandwiching an aerogel and well bonded is likely to be increditably strong and resilient.

At present this is a lab curiosity.  Let us hope we see it elsewhere. 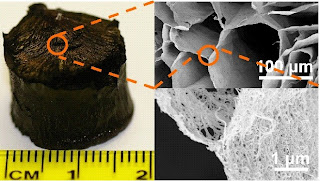 Researchers have created a new aerogel that boasts amazing strength and an incredibly large surface area. Nicknamed ‘frozen smoke’ due to its translucent appearance, aerogels are manufactured materials derived from a gel in which the liquid component of the gel has been replaced with a gas, resulting in a material renowned as the world’s lightest solid material. The new so-called “multiwalled carbon nanotube (MCNT) aerogel” could be used in sensors to detect pollutants and toxic substances, chemical reactors, and electronics components.

Although aerogels have been fabricated from silica, metal oxides, polymers, and carbon-based materials and are already used in thermal insulation in windows and buildings, tennis racquets, sponges to clean up oil spills, and other products, few scientists have succeeded in making aerogels from carbon nanotubes.

The researchers were able to succeed where so many before them had failed using a wet gel of well-dispersed pristine MWCNTs. After removing the liquid component from the MWCNT wet gel, they were able to create the lightest ever free-standing MWCNT aerogel monolith with a density of 4 mg/cm3.

MWCNT aerogels infused with a plastic material are flexible, like a spring that can be stretched thousands of times, and if the nanotubes in a one-ounce cube were unraveled and placed side-to-side and end-to-end, they would carpet three football fields. The MWCNT aerogels are also excellent conductors of electricity, which is what makes them ideal for sensing applications and offers great potential for their use in electronics components.

A report describing the process for making MWCNT aerogels and tests to determine their properties appears in ACS Nano.

Can you spray form objects? I know this is a very vague question, But I just want to know if you could spray form an object 46" X 10" X >.5" (LWH). 230 cubic inches of spray form carbon nano tubes in roughly those dimensions. Whats the $$ ching ching $$ on that? Would you require a substrate of sorts?

I just want to know if you can spray form objects. I want to create an object 47" x 10" X <.5". That's what, 235 cubic inches of spray form carbon nano tubes. That should weigh about 940mgs by your claim perhaps even less. I'm very curious about this stuff. I have other ideas and questions.