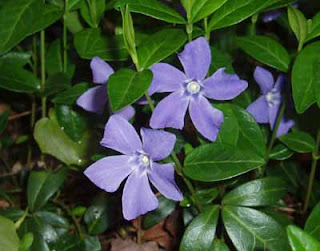 This is from a commercial pitch for a product based on vinpocetane which comes from the periwinkle flower.   It sounds like something we all need to know about.  Mental ability is blood flow dependent and any number of factors can affect that. Thus this is at least worth knowing.

Obviously if one is facing a planned mental challenge, this may be helpful.  I suspect a good night’s sleep is an even better concept.

Something like this is likely best used as needed provided one has a way to determine that.  For example, a morning session followed by lunch is likely to be very debilitating to mental activity.  This product with lunch may counter that.  So would a short nap to allow the digestive system to finish its job.

It needs to be recalled that digestion can consume a third of your blood oxygen, effectively starving your brain.  Thus a product like this one will need to be tested and worked around pretty imaginatively in order to optimize its effectiveness.

Can a Flower Make You Smarter?

Doctors in know about its miraculous IQ-boosting power and recommend it to millions. Yet in the it remains nothing more than a garden flower.

I’m talking about the periwinkle - otherwise known as Vinca minor. It’s more than a source of beautiful blue in your garden - it’s the source of a miraculous brain-booster called vinpocetine.

Vinpocetine is high-octane fuel for your brain. It’s so effective against fading mental powers that it’s widely used in nearly 50 countries, including Hungary, Germany, Poland, Russia, and Japan.1

Doctors in the don’t seem to know much about it. That’s a shame, because it’s a safe, natural brain booster.

Vinpocetine is one of Nature’s most potent antidotes to the forgetfulness, brain fog, and confusion we normally associate with aging.

* You won’t have to worry about losing the mental power you’ve enjoyed your whole life.

It unleashes your full powers of attention, concentration, and memory and puts you in back in control of your mental function.

The beauty of vinpocetine is that your brain knows exactly what to do with it. Start taking it and it goes to work right away.

That’s because in your early years, your brain makes it on its own. Think of it as your body’s “brain food.”

Once you hit early adulthood, though, you don’t make as much. You make even less as the years go by.

Starved of this key nutrient, your mental abilities begin to fade.

Start feeding your brain again, and they come roaring back.

This isn’t just about staying sharp. Vinpocetine is a healing force for both your brain andyour body. Here’s what it will do for you:

Boost blood flow to your brain.3

Keep your brain stocked with the “feel-good” compound dopamine, which helps you direct your thinking and behavior - and stay motivated.

To understand the key to vinpocetine’s power, you need to know just how much power your brain really needs.

Get Mental Energy Where It’s Needed Most

You already know that with each beat of your heart, blood pumps out through every vessel to all the organs of your body, delivering vital nutrients, fuel, and oxygen. This is the fire of living.

Believe it or not, your “gray matter” needs the most blood of any organ in your body, including your heart. Fully one seventh of the blood from every single heartbeat goes to the brain. It’s no wonder. As your body’s “command center,” it burns through a lot of energy.

Are you getting enough oxygen from blood flow alone to stay sharp, focused, and mentally agile? Chances are you’re not.

Depending on your age, diet, and overall health, you could be losing brain cells every minute.

Unlike most other types of tissue—for instance, your muscle cells, which can keep on going pretty well even without fresh oxygen—your brain cells are completely incapable of “anaerobic metabolism.” In plain English, they die when they don’t get enough air.

Even a brief lack of oxygen to brain tissue can cause immediate brain damage.

Of course, as you age, blood flows less efficiently to your brain. You can sidestep this problem and get your brain cells revved up again with vinpocetine.

1. It boosts blood circulation in your brain. It zeros in on your brain’s tiny blood vessels so they can deliver oxygen more efficiently. It even helps your brain use oxygen better.

3. It helps your body preserve its energy for a robust brain and power for healthy living.* It preserves something called “adenosine triphosphate” or ATP—the fuel every cell of your body needs to function.

In Repeated Studies It Turns “Brain Fog” into Brainpower!

Researchers split people with chronic “brain fog” into two groups. One took 10 mg of vinpocetine every day for a month, then 5 mg for another two months.6 The other group took a sugar pill.

A separate three-month trial confirmed that vinpocetine actually speeds up the rate of blood flow in your brain—even when you’re just sitting there. Of two groups, the one on vinpocetine got smarter, tested better, and appeared more steady and calm.7

Another study published just last year in the prestigious Journal of Neurological Sciencesfound that in people suffering from limited stroke damage, it had an almost magical healing effect. It directed blood right to the affected areas.8

Thinking and overall brainpower got a significant boost from vinpocetine in another clinical trial involving a 12-week long oral treatment. “Psychometric” tests gauged levels of higher brain function, with additional monitoring of participants’ overall mental health. After three months, the increase of blood flow velocity while at rest was significantly higher in the vinpocetine group.
Posted by arclein at 12:01 AM

This is from a commercial pitch for a product based on vinpocetane which comes from the periwinkle flower. It sounds like something we all need to know about. Mental ability is blood flow dependent and any number of factors can affect that. Thus this is at least worth knowing.