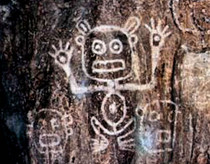 This is a reminder that hunter gatherer populations were real and survived quite well into even the modern era making their living as their forebears without much enthusiasm for taking up agriculture.  Their problem was simply numbers.  They were never bigger that a large family in a living range.  Agriculturalists could take the same range and put in place a village were a dozen or so survived.

In time, the band would be absorbed into the larger whole.

At least we now understand these images and their provenance when they are discovered.

Rock art specialists from around  have finally solved this century old archaeological riddle. The stone slab is evidence that native peoples from Puerto Rico or once lived within the interior of .

One day, long before Christopher Columbus claimed to have landed on the eastern edge of Asia, a forgotten people cut steps in the rocks leading up a steep bluff near the in the northwest section of the State of . They carved a supernatural figure on a four feet by one foot granite slab and erected it on the top of the knoll. The strange, primitive art was very different than the highly realistic stone sculptures found in the region that are known to have been created by the ancestors of Georgia’s Creek Indians.

During the mid-1800s a major industrial complex was developed near the ancient rock shrine. Somehow during the town’s construction, the tablet was overlooked; most likely because of a covering of soil. The town was called New . It would have inevitably become a major city of the Southeast, but in the autumn of 1864 the notorious Union general, William Tecumseh Sherman, ordered the town burned, and the hundreds of teenage girls who worked at its mills transported to a concentration camp in the Ohio.  Many of the girls were never seen again.  Some died in prison. Some married and stayed in the .  Some were murdered while they tried to walk home after the war. Some probably went to the West to start life anew away from the ruins of war.  Some just dissappeared without a trace.

The ruins of New have remained a testimony to the fact that war is hell. The town was never rebuilt and its landscape converted back to scrub woodlands within a decade after the Civil War. In 1909 a man named W. H. Roberts was hunting wild turkeys in a hilly area next to the ruins of . After climbing the bluff over Sweetwater Creek that was known as “an Indian cemetery” because of the stone artifacts scattered on its slopes, Roberts happened to notice a granite slab laying flat on the ground. Apparently, rains had washed away the thin top soil that had concealed it for centuries.

Most scholars, who viewed the images incised on the slab in the early 1900s, assumed it was created by Native Americans, but had no further explanation. Primitive rock art such as on the slab found by Roberts is now known as petroglyphs. There are now professionals and organizations that have developed the study of petroglyphs into a science, but a century ago such artifacts were viewed as curiosities

Throughout the mid-20th century, the Roberts (or Sweetwater Creek) petroglyph was on display at the on in . This landmark house was the original office of the Division of Archives and History. After the state agency moved to a large marble structure near the Capitol, the petroglyphs were put in storage. The granite slab stayed there until was created around the ruins of in the 1970s. The slab is now on display at the park and protected by a Plexiglas screen.

A comment from a California professor opens Pandora’s Box

During the first week of April 2011, Haskell sent emails throughout to friends who were either archaeologists, petroglyph specialists or experts on Native American art. Most of the responses also expressed bafflement that such a strange petroglyph design would be found near . Some respondents commented that it was similar to Ice Age cave art found in and . However, because of its placement on a hilltop shrine associated with Native American artifacts, the Sweetwater Petroglyph appears to date from a much more recent epoch.

Stephen C. Jett is a geography professor at the of at and a recognized scholar of the petroglyphs and pictographs of the American Southwest. His brief comment emailed back to Jon Haskell was the first interpretation in a century that assigned an ethnic identity to the Sweetwater Petroglyph. He wrote, “It looks vaguely Caribbean to me, but that's just an impression, I am not conversant with the rock art of that region.”

Images and descriptions of the Sweetwater Petroglyph were immediately emailed to several specialists on rock art. The respondents sent back photographs of rock art in , Puerto Rico and Hispaniola that were the same style as the one in . One petroglyph from seems to portray the very same supernatural figure. It is a “guardian spirit” whose presence warned travelers that they were entering a province or sacred area. This style of art was typically placed on stone slabs 3-5 tall, which were located on hilltops or beside major trails.

The Sweetwater Petroglyph is a stone slab 4 feet tall that was originally on a hilltop. It is very significant evidence that Native Americans originally from , or Hispaniola paddled to the ; followed the up to the mouth of the ; then ulitimately settled in the vicinity of what is now . The most likely time period for this migration is from 1,000 to 2,000 years ago, but the date of the carvings on the granite slab are currently unknown.

Archaeologists currently believe that the was settled by waves of peoples moving northward out of . The presence of the oldest known pottery of the Western Hemisphere in suggests that there may have also been movements of population and cultural innovations in the other direction. It is documented, though, that the agricultural villagers began island-hopping northward out of around 500 BC and by 500 AD had occupied most islands in the . These early people grew tobacco and sweet potatoes, but not many other cultivated plants. Their presence in the coincides with the appearance of tobacco in the .

In the late 1960s archaeologists working in advance of an industrial park on the near Sweetwater Creek's outlet found three varieties of indigenous sweet potatoes growing wild. They looked like "bushy" morning glories, but had large, edible tubers growing underground. Intensive land development since then has eliminated the wild sweet potato patches.

A second wave of immigration by Natives speaking dialects of the Arawak language began around 600 AD. These immigrants are associated with the Taino People of the and the Timucua of . They introduced the bow and arrow, plus advanced varieties of Indian corn to the . They were much sophisticated artisans and farmers than the first wave of immigrants. The period also marks the introduction of the bow and arrow, plus advanced varieties of corn into the . By 1150 AD the second wave of Arawak immigrants had reached the peninsula. About that same time, numerous towns with mounds were abandoned in northeastern as was the large megapolis on the near , , which is now known as .

It is commonly known that the Arawak-speaking Timucua occupied northeastern and the southeastern tip of in the 1500s when colonized the region. The public is not generally aware that there was also a small cluster of Arawak-speaking villages in the vicinity of until the mid-1700s, when they were absorbed by the Creek Indian Confederacy. The presence of what appears to be an Caribbean rock art in northern Georgia suggests that the first wave of Caribbean immigrants were pushed northward into the mainland of North America by the second wave, who were better armed with bows and arrows, and better fed by a wide range of cultivated crops.

In 1541 the Hernando Expedition observed an ethnic group in what is now that had a culture very similar to the first wave of Arawak immigrants into the . They were described as primitive hunters who went naked, did not know how to grow corn and beans, and relied on roots that they dug from the ground for nutrition. The Creek Indian guides of the expedition called this primitive people the Chalo-ke, which means bass (fish) people. They were not the same people as the Cherokees, and are last seen on a map by French cartographer Delisle, living in southeast in the early 1700s.

The earlier occupants of the depended on hunting, gathering, and the digging up of wild yucca roots (cassava) or sweet potatoes for nutrition. They went almost naked. The Guanajatabeyes and Ciboney people were pushed into the western sections of and by the more sophisticated Taino. The Ciboney often lived in caves. They both soon became extinct after the Spanish arrived.

The Sweetwater Petroglyph has never been scientifically dated by geologists. In order to interpret the stone more precisely, the general range of its age must be determined. There may be other stones like it hidden under the soil or forgotten in the basements of museums.