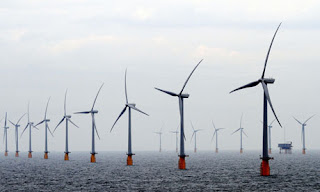 The shoe has dropped.  In a straight out economic fight with nuclear, wind wins.  And worse, once paid off, and they do get paid off, it is practically free.

Worse, they can be all done in months wherever it make sense and offshore is looking better every day.

The wind industry is mature and can support a flat out building program that can make it the dominant source of energy.  Recall also that we are entering the age of superconducting power lines that will shift power across a continent at no real cost.  Thus a shortfall in will be replaced by power from easily.

Variable as it may be in terms of local output, tens of thousands of windmills throughout only experiences the average effect and that is never variable.

And it all comes down to cost.  Windmills are getting larger and therefore cheaper in terms of cost to output.  They never need fuel and that hand wave disappears.  They become ideal for pension funds to invest in.

In fact they are perfect.  Buy a windmill at age twenty five with forty years amortization and at sixty five you owe no money and you sell your power at the prevailing rate.  You even get depreciation to use tax money to pay it off.  In fact, in the years I have spent around investments, this is as perfect a retirement asset as one could hope to own.   Even better it is immune to inflation and the like.

Generating energy from wind turbines at sea would be cheaper than building new atomic power plants, 's climate chief has said, in the latest challenge to the crisis-stricken nuclear industry.

Offshore wind energy has long been seen as an expensive way of generating power, costing about two to three times more than erecting turbines on land, but the expense is likely to come down, while the costs of nuclear energy are opaque, according to analysis by the European commission.

The nuclear crisis in has led the , and other countries to tell their nationals to consider leaving Tokyo, in response to fears of spreading nuclear contamination. The crisis also prompted the EU's energy commissioner, Günther Oettinger, to say: "There is talk of an apocalypse, and I think the word is particularly well chosen."

Hedegaard told the European Wind Energy Association's annual conference in Brussels that the problems facing nuclear power put renewable sources of energy, such as wind and solar power, back in the spotlight.

"There are 143 nuclear power plants in and they are not going to disappear," she said. "But when it comes to new energy capacity that discussion is likely to be very much influenced by what is happening in ."

She suggested that the Japanese nuclear incidents, which have not yet been brought under control, would "automatically" turn attention to renewable power.

However, she was careful to insist that it was up to member states to decide on their energy mix, as long as they adhered to the Europe-wide targets of cutting greenhouse gas emissions by 20% by 2020 and generating 20% of energy from renewable sources by the same date.

Hedegaard published a "roadmap to 2050" this month that showed the EU was on track to reduce greenhouse gas emissions by 25% if current policies are implemented. She said this strengthened the case put by some member states that the EU's current target of cutting carbon dioxide by 20% by 2020 should be toughened to 30%.

and have put nuclear projects on hold after the incidents at several Japanese nuclear reactors.

Europe's biggest nuclear operator, EDF of France, insisted that plans to build a new generation of reactors in should not be held back by the problems in .

Vincent de Rivaz, chief executive of EDF Energy, said: "While we understand the importance of adjusting the timetable to take into account the Nuclear Installations Inspectorate report [on the Japanese crisis], it is also equally important that establishing the framework for new nuclear should not be subject to undue delay. The events in do not change the need for nuclear in ."

He said meetings this week with local authorities regarding places such as Hinkley Point in , where EDF wants to build a new reactor, had still been positive.

De Rivaz told the Nuclear Development Forum, including the energy secretary, Chris Huhne, that there was "local determination to press ahead with our project, and the strong feeling that whilst we should learn any lessons we may need to from Japan, we should not delay our progress".

Dear Arclein:
I am very disappointed by this posting and your ideas. You are very much mistaken regarding the viability of the wind power systems presently available. You have completely forgotten about maintenance costs and the fact that wind power is NOT a dependable source: far too variable. I have worked on environmental assessment and other projects involving windpower systems and the failure rate on the equipment, including equipment built and installed in the last 4-5 years, is incredible. The costs for land, impact on the land, production and transportation of materials, and many other issues - when compared to 2000-2010 nuclear technology (not the 1970s stuff) - is not a slam-dunk.

you are quite right, but what has and will now change is the loss ratio for energy transfer. The recently announced thin super conducting cable will allow us to use thousands of individual wind towers all across the continent as if they are one plant.

Thus we can place such towers in the best locales and avoid the obvious problems. Schools of wind towers out on the plains or off new England all look the same to the grid in New York once we are rid of line loss.

This also effectively doubles at least the deliverables from the established infrastructure.

Can you speak to the actual system losses experienced by various types of wind mills due to equipment failure?