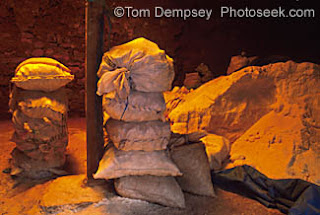 The biggest single risk developing in the global economy is presently coming from commodity speculation against pumped up Chinese demand expectations.  Everything is already well priced and fresh supply is also in the pipeline everywhere.

This item reminds us just how frantic it can all become as money washes over a targeted commodity and disrupts current supply and demand arrangements.  In the short tem every commodity is in tight supply all the time if you throw enough money at it.  Past that the warehouses get cleaned out and the speculators end up living with their inventory.

A general slowdown in will crush the commodity market and that day of reckoning is a current and present risk even with the pundits calling for 2014 for such a slow down.  I suspect that the chickens will come home to roost during the next year or even possibly late this year.

In the meantime, enjoy this little bit of painful human madness.

China can blow bubbles faster and bigger than just about any other country, but the Extraordinary Salt Mania of March 2011 takes the cake for speed, size and bizarreness. The brief, dazed run on salt by investors following the March 11 tsunami demonstratesChina’s susceptibility to speculative bubbles and the potential to pass on the effects to international markets (discussed further in our China Monthly).

Shortly after radiation was reported to be leaking from ’s Daiichi nuclear power plant in mid-March, rumors began to spread that ’s sea salt could be contaminated by radiation and that iodized salt could prevent radiation sickness. The apparent demand shock from the rumored salt cure and a perceived supply shock from the polluted seawater caused prices to spike upward of 85% in a matter of days. State media reported that a Mr. Guo bought 6.5 tons of salt in on March 17, only to see prices collapse three days later after repeated warnings from government officials that there was no salt shortage and that consuming iodized salt could not assuage radiation sickness, of which there was no threat.

In a matter of days, there was a displacement, an apparent expansion of credit in the underground market, euphoric buying on expectations of ever-higher prices and finally revulsion once reality sank back in. The meteor shower of shooting salt prices over China is not an isolated example of speculation gone awry: The current stockpiling of copper in China’s ports is inflating the global price, which could collapse if regulators put restrictions on the use of the metal as collateral for bank loans. Likewise, Hong Kong’s property bubble is partly a spillover effect from the bubble in some of China’s urban high-end markets. In fact, investors are vulnerable to several factors within the Chinese system that could affect global asset prices.

First, decades of financial repression have resulted in the broad money supply (M2) expanding to 182% of GDP, providing a massive pool of potential liquidity for speculation, while negative real interest rates on deposits encourage savers to seek alternatives. There are sufficient monetary assets to fund a bubble of stupendous magnitude; no excessive loosening is required. From the end of Q3 2006 to its peak in October 2007, the Composite Index increased 230%. In the preceding six quarters, M2 growth outpaced nominal GDP growth by less than a percentage point. It was the velocity of money that spiked, not the quantity. Velocity is more difficult for the People’s Bank of  to control, especially with banks’ required reserve ratios already at record highs, and current conditions seem ripe for a bubble.

Second, the Communist Party of ’s dominance over the press, even independent sources, results in low trust of official information, counteracting their ability to dispel unfounded speculative manias. At the same time, heavy reliance on social networks, guanxi, results in an abnormal amount of inside information sharing, and thus speculative opportunities. Positive feedback loops proliferate as investors pile into the same opportunities and bid prices up.

Third, the government’s interference in price setting distorts markets, creating potentially huge divergences from equilibrium. From vegetables to apartments, the government’s efforts to control prices only shifts the adjustment burden to the supply side as markets seek equilibrium. This also creates a whack-a-mole game between speculators and the government as liquidity shifts from one asset class to another.

Fourth, “new era” thinking is epidemic in China, and this euphoria often spills over into asset price valuations as speculators discount historical benchmarks.

Many of these factors can be seen in the Extraordinary Salt Mania of March 2011. A speculator living in a 20-square-meter apartment was able to lay out US$4,100 for 260 bags of salt that filled half of his apartment. Rumors spread quickly through social networks of rising salt prices, while repeated warnings about the safety of ’s salt supply and the dangers of excessive salt consumption went unheeded. The National Development and Reform Commission instructed its local price control authorities to curb salt hoarding and disrupt the market. The only missing factor was “new era” thinking, since this short-lived mania was motivated by panic buying, not delusions of ’s future grandeur.

The Chinese system is a game with its own controls that can send shockwaves through global systems as local prices diverge from global asset markets and arbitragers elsewhere narrow the gap. Investors should be careful to distinguish speculative demandfrom the real thing and avoid feeding into the next big bubble.
Posted by arclein at 12:01 AM