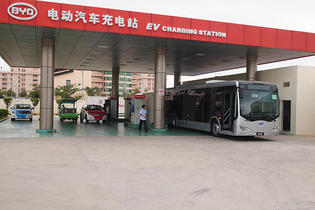 I keep forgetting there is someone else in the world that is more forward looking than the happens to be.  Or more precisely, all the forward energies of the are largely corralled into the Military Industrial Leviathan at the expense of internal development.

The Chinese know that dragging out the oil game or becoming dependent on oil is profoundly unwise and that they can also lead the market.

Yes children, is going to produce million of cars for their billion customers and they will not be fuel based at all.  The whole system will be electric since the present protocol is not an option at all.  And yes, is now big enough to do all this without any help from .

Expect to see our markets flooded with cheap electrical cars made in soon and I mean that soon.

So while a few are still moaning about how difficult it all will be, the tsunami of cheap EVs will drown out the whole Global automobile industry inside a couple of years, commencing the moment that storage is truly practical and that may have already happened and we are simply waiting for the first deliverables.

charges up the on-ramp of the electric highway

Electric charging stations like this one in Shenzhen could become a common sight in if the government sticks to its ambitious EV goals. Photo: Remko TanisWhen it comes to the future of electric cars, as with other green technologies, the wild card is .

The People's Republic has invested billions in renewable energy and has become a solar superpower in photovoltaic manufacturing. It's also poised to one day potentially blow away the competition in wind turbine production. 's new five-year plan calls for dramatic increases in energy efficiency and designates electric cars as a strategic industry. (The government has set a goal of five million electric cars on the roads by 2020.)

The country already is the world's largest automotive market -- General Motors now sells more cars there than in the United States -- and its support of electric car and battery makers has attracted investors like Warren Buffett, who has put his money into EV manufacturer BYD.

So far, domestic demand in China for electric cars is tiny, even compared to the nascent market. According to a report from GTM Research -- yes, that report has been a gold mine of data for posts this week -- there are but 295 electric cars on the road in China. That's not a typo. Not that the is exactly racing down the electric highway, as there are only 2,000 electrics in service here, the report says.

But other numbers in the report foreshadow 's potential to dominate the electric car market.

The Chinese government's $17 billion investment in the electric car industry so far outstrips the $5 billion the government has put into EVs. has 120 domestic automakers compared to 13 in the And most telling, some 33,200 people work in the Chinese lithium-ion battery industry, compared to 1,100 here. By 2020, GTM Research estimates that new car sales will reach 27.5 million annually in China compared to 17 million in the U.S.

"How aggressively China will mandate EVs is one of the more interesting considerations in looking at the global market potential, as this nation now has the means to affect not only global production, but also the global demand for electric vehicles," wrote David J. Leeds, the report's author.

Todd Woody is a veteran environmental journalist based in .