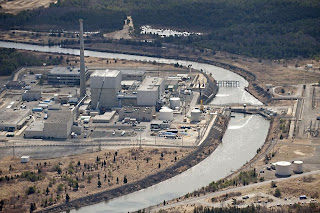 It should be blindingly obvious that sea side plants must be proof against any form of tsunami however unlikely.  It is not particularly difficult even.

Everything in would have been easily solved by the simple expedient of putting back up generators a good ten stories up in a steel frame building.  Is that so hard or even particularly expensive?  At worst, the lower floors would provide office space and the back up equipment might even have been used from time to time.

And yes it is possible to have tsunamis on the East coast however unlikely.  One wiped out the European Bronze Age in 1159 BC.

Perhaps it is also time to move spent fuel rods to a central depository in to get them separated from a real problem with the reactor.  We have now learned that one makes the other an immediate issue that does not go away.

None of this is expensive.  How were the decisions made?

A sleepy New Jersey town has popped onto people's radar screens because it has the oldest running nuclear power plant in the United States -- and, some say, the most dangerous.

Named for a Revolutionary War general, Lacey is the kind of American town that few from outside the seaside settlement knew much about before the earthquake and tsunami in Japan triggered a nuclear crisis.

Down the road from the 1950s-style diner and across from the bridge that locals use as a fishing pier stands the Oyster Creek nuclear plant.

It uses a GE Mark I Boiling Water reactor identical to those that lost power at Japan's Fukushima plant in the March 11 earthquake and then was struck by a tsunami that knocked out its backup generators, causing reactor cooling functions to fail.

US anti-nuclear activists and many residents of Lacey and surrounding shore townships worry that a similar nuclear disaster could happen at Oyster Creek, and it wouldn't need an earthquake or tsunami to trigger it.

Oyster Creek has been dogged by problems including a corroding liner in the carbon steel containment unit; leaks that allow radioactive tritium to seep into drinking water; and huge volumes of stocked spent fuel rods.

"We have 40 years of radiation on site -- two-and-a-half to three times more than in Japan," anti-nuclear activist Jeff Brown told AFP.

"You also have that tremendously stupid design to start with where the spent fuel rods are sitting on top of the reactor," he said, raising a fear among residents that the reactor could be an easy target for a terrorist attack.

Oyster Creek is owned and operated by Exelon Corporation, which employs 700 people at the plant. The company disputes the charges by activists, insisting the reactor is safe.

"Nuclear power stations in general are the most hardened and well-protected industrial facilities in existence. Oyster Creek is no exception," Exelon spokesman Craig Nesbitt told AFP.
Half a million people live within what would be the evacuation zone if Oyster Creek were ever to have a radiation accident. In the summer, the population swells with beach-goers heading to the shore.

is not in a seismically active zone but meteorologists say the coastal state is long overdue for a Category Five hurricane.

"One good storm surge, and Oyster Creek's backup generators are swamped. It's all over again," Sturmfels said.

Nesbitt rejects such assessments, saying the plant is five miles (eight kilometers) off the Atlantic coast, protected by barrier islands, and 23 feet (seven meters) above sea level, far higher than the largest recorded storm tide of seven feet, in 1962.

He also said Oyster Creek "is constantly evaluated and improved," and that more than $1 billion has been spent on plant upgrades since operations began in 1969.
The Nuclear Regulatory Commission extended Oyster Creek's license for another 20 years in 2009.

The NRC not only gives out nuclear licenses but is the industry safety watchdog. That's a conflict of interest, say critics who liken the situation to the regulation of the oil industry prior to last year's devastating oil spill.

Under pressure from state officials, Oyster Creek's license was rolled back to 10 years, and the plant is now due to close for good in 2019.

Even that's too late, say some residents.

"I don't like it. They should close it sooner," retiree Barbara Murrofsky told AFP as she shopped at a local hardware store.

"What's happening in has made us more aware of the problems we have in our own backyard," she said. "There are so many people who live near here that an accident would be a major disaster. They should shut it down now."

But another local, Rick Gifford, looked philosophically at Oyster Creek.

"It's been running for 40 years with no problem, there's no reason it should start having problems now," he said.

Greg Auriemma, a lawyer for the Sierra Club environmental group, said Gifford's stance was not unusual in Lacey.

"There's a sense of complacency because while the plant has had a lot of negative publicity, no major disaster has occurred. So people look at it and say, 'It's been running for 40 years, what's the big deal?'"

But, Auriemma said, as Japan showed, one tragic event can dramatically change the situation. "There's a potential disaster that could happen right here in our backyard," he told AFP.

The NRC on Wednesday launched its review of the nation's 24 reactors, saying a full report and recommendations will be published in six months.

A federal court hearing a case brought in 2009 by environmental groups against the NRC on Monday asked the nuclear watchdog to advise if 's unfolding crisis impacted "the propriety" of renewing Oyster Creek's license.

On the same day, the NRC extended for 20 years the license of another Mark 1 reactor, in the state of .

The Yankee reactor has had tritium leaks, a cooling tower collapse and even a fire in the plant's transformer.