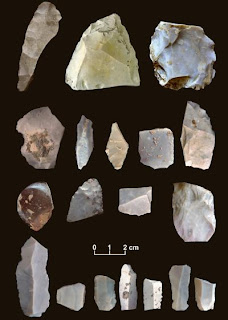 That should end that debate.

I would like to see a genetic study done of the Indian populations of the to determine the level of genetic variation as compared to .  We need to determine now small a population could have made the actual leap and if we can determine waves of contribution.  I am likely asking for the impossible but we should think about it.

These are some of the artifacts from the 15,500-year-old horizon. Credit: [Image courtesy of Michael R. Waters]

New discoveries at a Central Texas archaeological site by a Texas A&M University-led research team prove that people lived in the region far earlier – as much as 2,500 years earlier – than previously believed, rewriting what anthropologists know about when the first inhabitants arrived in North America. That pushes the arrival date back to about 15,500 years ago.

Michael Waters, director of Texas A&M's Center for the Study of First Americans, along with researchers from Baylor University, the University of Illinois-Chicago, the University of Minnesota, and Texas State University, have found the oldest archaeological evidence for human occupation in Texas and North America at the Debra L.Friedkin site, located about 40 miles northwest of Austin. Their work is published in the current issue of Science magazine.

Waters says that buried in deposits next to a small spring-fed stream is a record of human occupation spanning the last 15,500 years. Near the surface is the record of the Late Prehistoric and Archaic occupants of the region. Buried deeper in the soil are layers with Folsom and Clovis occupations going back 12,000 to 13,000 years ago.

"But the kicker was the discovery of nearly 16,000 artifacts below the horizon that dated to 15,500 years ago," Waters notes.

"Most of these are chipping debris from the making and resharpening of tools, but over 50 are tools. There are bifacial artifacts that tell us they were making projectile points and knives at the site," Waters says. There are expediently made tools and blades that were used for cutting and scraping."

For more than 80 years, it has been argued that the Clovis people were the first to enter the , Waters says. He goes on to say that over the last few decades, there have been several credible sites which date older than Clovis found in North America -- specifically in Wisconsin, Pennsylvania, Florida, and Oregon.

"However, this evidence is not very robust," Waters observes.

"This discovery challenges us to re-think the early colonization of the . There's no doubt these tools and weapons are human-made and they date to about 15,500 years ago, making them the oldest artifacts found both in and ."

Waters has been working at the site since 2006, and analysis of the artifacts collected from the site is ongoing. Waters says, "These studies will help us figure out where these people came from, how they adapted to the new environments they encountered, and understand the origins of later groups like Clovis."
Provided by (news : web
Posted by arclein at 12:01 AM

EQUATIONS' has been published by Physics Essays published by the American sbo
sbo
Institute of Physics and appeared in their June 2010 quarterly. 40 years ago I took an honors degree in applied mathematics