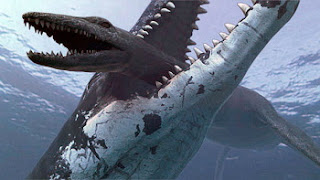 The legend of the leviathan has come down to us through actual mention in the Bible and has remained intact from our Bronze Age informants.

Just as surely, it is plausible that this creature survived through the end of the Ice Age 12,000 years ago and then slowly died out for reasons presently unclear.  It certainly was not from a lack of food or preferred habitats.  The population may well simply have crashed below sustainability during the Pleistocene Nonconformity.

This fossil confirms the reality of this fearsome creature that was a whale hunter and certainly a serious threat to a fishing boat that looked much like a whale from below.  We may even take the Jonah half seriously now.  A whale hunting a ship is creditable.  Swallowing Jonah and barfing him back immediately is not impossible and compares to occasional shark attacks.  Jonah was still a very lucky chap.

The fossilized skull of a gigantic sea monster that attacked and ate whales was unearthed in an ancient seabed along the arid wilderness of the Peruvian coast.

The remains of the incredible creature are so huge, researchers have dubbed it "the Leviathan."

The Leviathan, a terrifying behemoth of the deep, is described in the Bible's Old Testament. The Hebrews called it one of the seven princes of Hell and its gatekeeper.

Those that observed it in the waters far offshore claimed the horrible thing was the most terrifying creature in existence.

Long thought to be a myth, the Leviathan has been found. The fossil is well-preserved and is a testament in living stone to the terrors of the seas that early sailors faced.

The 12 million-year-old creature, more than 55 feet long, has huge teeth and is believed to have once hunted and fed on other large aquatic animals like seals, dolphins and other whales.

"It was a kind of a sea monster," Dr. Christian de Muizon, director of the in told BBC News.

Writing about the discovery in the journal Nature, the research teamrelate how they discovered the Leviathan skull in the Pisco-Ica .

Olivier Lambert, a student of de Muizon, described the discovery: "It was the last day of our field trip when one of our colleagues came and told us that he thought he'd found something very interesting. So we joined him and he showed it to us."

Although the specimen interested the student, he at first thought it was the remains of a sperm whale and wasn't aware of the magnitude of the discovery.

"We immediately saw that it was a very large whale and when we looked closer we saw it was a giant sperm whale with huge teeth."

What he thought was a sperm whale actually was a creature much larger, much more vicious, and much older. The Leviathan also has teeth on the upper and lower jaw whereas the sperm whale only has a set of lower teeth.

Researchers through the years have speculated that a creature like Leviathan might exist based on teeth that have been found. Now with the discovery of the massive skull, no doubt remains that such a prehistoric sea creature did live to terrorize the oceans.

The myth has become reality.

No one knows why the creature died out. More research may uncover the cause.

The entire research team are whale experts and fans of the novel "Moby Dick." In honor of the author, Herman Melville, they officially named one of the greatest sea monster whales after him.

From now on, in scientific literature the fearsome beast will be known as the "Leviathan melvillei."

(Reuters) - The fossil of a giant whale called Leviathan for having teeth bigger than a grown man's forearms has been found in by palaeontologists who on Thursday said it may have been the largest predator to ever roam the seas.

Leviathan Melvillei, which was named after the sea monster in the Bible and the author of "Moby Dick" Herman Melville, is an ancestor of the modern day sperm whale, said Rodolfo Salas, a palaeontologist at Peru's Natural History Museum who took part in the study.

"This is an enormous tooth, more or less 14 inches (36 cm) long," Salas told Reuters. "The features of the teeth lead us to believe that the Leviathan was a big predator. It has the largest teeth on record."

The fossil of Leviathan was found two years ago and a team of scientists only unveiled the results of their find this week. Leviathan lived roughly 12 million years ago and its teeth were about twice as long as those of the great dinosaur Tyrannosaurus Rex.

"The Leviathan could have fed on other whales, which were very abundant and diverse in that period," said Salas.

As well as ten well-preserved teeth, the team of European and Peruvian palaeontologists also found the whale's skull and its lower jaw. The findings were published in the journal Nature and the fossil will soon go on exhibit in 's capital.

The discovery was made in 2008 in the Ocucaje desert in southern , which millions of years ago was the bed of a sea, and an area that has yielded dozens of big discoveries.

"In terms of (ancient) vertebrate sea life, has the privilege of having the most important site in the world, the Ocucaje desert, which is where we've made this find," said Salas.

He said the Leviathan may have been bigger than one of its contemporaries, the Carcharocles Megalodon, widely regarded as the largest shark that ever lived, at some 65.5 feet (20 metres) in length.

"The Leviathan could have been the biggest predator that has ever lived in the sea," said Salas.