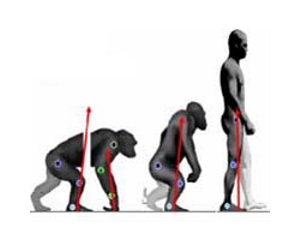 The first take home is that we have 186 separate species of primates.  No doubt many more were eliminated in competition with ourselves.  This new paper apparently resolves the shape of the various lineages and establishes linkages that will resolve key questions and inform future debate and investigation.

We are a long way from the ideas expressed in the accompanying illustration.

Again we are watching a rapid expansion of understanding taking place as the tools of the past couple of decades are vigorously applied.

A New Evolutionary History Of Primates

The phylogenetic analysis was conducted by international researchers to determine the origin, evolution, patterns of speciation, and unique features in genome divergence among primate lineages. This evolutionary history will be published on March 17 in the open-access journal PLoS Genetics.

Patterns of species and gene sequence evolution and adaptation relate not only to human genome organization and genetic disease sensitivity, but also to global emergence of zoonoses (human pathogens originating from non-human disease reservoirs), to mammalian comparative genomics, to primate taxonomy and to species conservation.

To date, available molecular genetic data applied to primate systematics has been informative, but limited in scope and constrained to just specific subsets of taxa. Now, a team of international researchers from the , , and , have provided a highly robust depiction of the divergence hierarchy, mode and tempo governing the extraordinarily divergent primate lineages.

The authors said: "Advances in human biomedicine, including those focused on changes in genes triggered or disrupted in development, resistance/susceptibility to infectious disease, cancers, and mechanisms of recombination and genome plasticity, can not be adequately interpreted in the absence of a precise evolutionary context or hierarchy. Resolution of the primate species phylogeny here provides a validated framework essential in the development, interpretation and discovery of the genetic underpinnings of human adaptation and disease."

This phrase displays basic ignorance of the relationship between genetics and physiology/system adaptation.
It should be replaced with "adaptation underpinnings of human genetics".

UNRAVEL COMPLEXITIES OF GENETICS.
Extend Evolution/Natural Selection Backward To Genes/Genomes, BOTH ARE ORGANISMS.