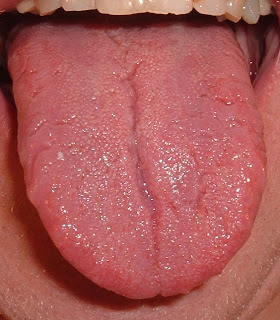 It all helps and sticking your tongue out at your smart phone is a great start in making medicine way more accessible.

In the best of worlds coming soon to a mall near you, we merely sit down in a testing device and hundreds of variables get measured and correlated.  It becomes likely that ninety percent of all ailments get picked up early enough to prevent further development.

This type of technology allows valuable empirical insights to be applied uniformly and often.  One does not need to understand the biological pathway that produces subtle changes related to various conditions.  In fact all that theory is sometimes grossly misleading and distracting when it is enough to observe that a dog can smell the presence of cancer in a person’s body.

I suspect that all medicine will devolve into a automated diagnostic system that supports intervention that is skillful and often subtle.

ScienceDaily (May 26, 2012) — For 5,000 years, the Chinese have used a system of medicine based on the flow and balance of positive and negative energies in the body. In this system, the appearance of the tongue is one of the measures used to classify the overall physical status of the body, or zheng. Now, researchers have developed computer software that combines the ancient practices and modern medicine by providing an automated system for analyzing images of the tongue.

"Knowing your zheng classification can serve as a pre-screening tool and help with preventive medicine," said Dong Xu, chair of MU's computer science department in the and study co-author. "Our software helps bridge Eastern and Western medicine, since an imbalance in zheng could serve as a warning to go see a doctor. Within a year, our ultimate goal is to create an application for smartphones that will allow anyone to take a photo of their tongue and learn the status of their zheng."

The software analyzes images based on the tongue's color and coating to distinguish between tongues showing signs of "hot" or "cold" zheng. Shades of red and yellow are associated with hot zheng, whereas a white coating on the tongue is a sign of cold zheng.
"Hot and cold zheng doesn't refer directly to body temperature," said Xu, who is also on the faculty of the . "Rather, it refers to a suite of symptoms associated with the state of the body as a whole."

For example, a person with cold zheng may feel chills and coolness in the limbs and show a pale flushing of face. Their voice may have a high pitch. Other symptoms of cold sheng are clear urine and loose stool. They also may prefer hot foods and drinks and desire warm environments.

In Chinese traditional medicine both hot and cold zheng can be symptoms of gastritis, an inflammation of the stomach lining frequently caused by bacterial infection.

"Our software was able to classify people based on their zhengstatus," said study co-author Ye Duan, associate professor of computer science at MU.

"As we continue to work on the software we hope to improve its ability," Duan said. "Eventually everyone will be able to use this tool at home using webcams or smartphone applications. That will allow them to monitor their zheng and get an early warning about possible ailments."

The study "Automated Tongue Feature Extraction for ZHENG Classification in Traditional Chinese Medicine" was accepted for publication in the journal Evidence Based Complementary and Alternative Medicine. The study's first author was doctoral student Ratchadaporn Kanawong and the second author was post-doctoral researcher Tayo Obafemi-Ajayi.

Psoriasis is a skin disease characterized by itchy and red patches that become covered with loose and silvery scales. This condition may acute, chronic and mild. The eruptions appear most often on the scalp, forearms, elbows, knees, and legs. It may also occur on the chest, abdomen, back, and soles of thee feet