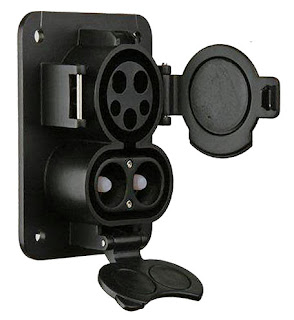 It is here that the EV revolution truly begins. With this and as early as next year it becomes possible for building managers to cost the install and know exactly what to expect. With a rapidly increasing install base, it begins to be possible for the consumer to make a convenience choice in his auto purchases.

And that truly matters, something that has been missing in the debate up to now. After all, owning a car has always meant owning parking rights at home and near or at the place of work. It has also meant access to refueling as conveniently. It is all part of the package.

Now the parking itself becomes a prospective service site. Make it all available and a user will then look at the option and make his choice on other variables.

Real revolutions begin in the simplest things. The first key decisions were made in terms of customizing computer software in the mid sixties. They hold to this day.

For EVs capability has arrived sufficient to expect a market response. The consumer knows that he makes two trips a day and that is the bulk of it. A short range EV is a viable option there and always has been. Short range never mattered for the gasoline engine. For the EV it does even when we gain much better ranges. You can not help but be aware of your range and present remaining charge.

(Phys.org) -- Big names in global car manufacturers have announced a common method for charging electric vehicles. The companies are in agreement with a common charging technology for use on electric vehicles in Europe and the United States. The new method will provide special convenience by enabling car owners to charge their EVs using AC or DC from a single inlet. The charging system will allow for both alternating current and faster direct current charging on the same port. Another feature of the new system is that the charge can be done in faster time; a battery charge will take only 15 to 20 minutes.

Audi, General Motors, BMW, Chrysler, Daimler, Ford, Porsche, and Volkswagen are the automakers who support the technology, which will be showcased next week at the Electric Vehicle Symposium (EVS) in Los Angeles, from May 6 to May 9.

The first vehicles to use the system are expected next year. Vehicles are already in development that will be capable of using the new system. The charging solution is titled "DC Fast Charging with a Combined Charging System” or Combined Charging System, for short. An EVS statement says this is a step forward in reducing complexity with its combined AC and DC charging. “One vehicle inlet, one control logic, one communication path, and one electric architecture.” The LA event will show vehicles and charge pumps for the Combined Charging System.

According to reports, the system was developed for all international vehicle markets. Uniformity was key, with identical electrical systems, charge controllers, package dimensions and safety mechanisms.

Numerous auto blogs point to the announcement as good news for an EV industry trying to achieve wider consumer adoption by coming up with practical solutions for battery charging.

Car buyers understandably are skittish about not having available charging opportunities on longer drives or about charging waits. The new method takes15 to 20 minutes to power up a car using a similar standard.

According to a Chrysler release, the timeline is as follows: Commercially available combined charging units are projected for later this year. All committed OEMs have vehicles in development that will use the Combined Charging System. The first vehicles to use this system will reach the market in 2013.