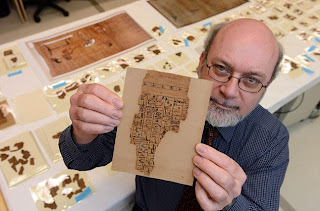 When this scroll was produced, some form of written language was in place for as much as a thousand years. Egypt had the good fortune to preserve documents in the dryness of the desert climate. Other cultures were not so fortunate with the exception of Sumeria and their clay tablets.

It is good to learn that this document will be now largely complete.

The Book of the Dead appears to inform the soul of his passage to the afterlife. This is not an unexpected development in light of the physical reality of the near death experience, or luminous dreaming that is widely experienced and reported. It is recognized that an uninstructed soul can linger a long time outside his abode in the afterlife and that is undesirable.


The last missing pages from a supposedly 'magical' Book of the Dead from an Egyptian priest, Amenhotep, have been found after a century-long search - in a museum in Queensland.

British Museum Egyptologist Dr John Taylor said he was 'floored' by the discovery of the 100 fragments.

It's the end of a worldwide search by archaeologists for the papyrus scroll - which supposedly contains spells to guide spirits into the afterlife.

Ms Bates said British Museum Curator and world renowned Egyptologist Dr John Taylor had stumbled across a section of the manuscript as part of a Queensland Museum display.

‘After spotting the piece Dr Taylor was shown the other 100 plus fragments held in the Museum’s stores and was floored by what he had uncovered,’ Ms Bates said.

‘These unsuspecting papyrus pieces form the missing part of a highly historically valuable ‘Book of the Dead’ that belonged to the Chief Builder of the temple of Amun, Amenhotep.

‘Sections of this precious manuscript have laid scattered across the globe for a hundred years with some of the pieces held safely in the collections of British Museum, Boston Museum of Fine Arts, and the Metropolitan Museum of Art (MET), New York.

However, archaeologists had been unable to piece it together in its entirety and have long been looking for the missing sections to complete the story of this important Egyptian figure’s journey into the afterlife.’

A ‘Book of the Dead’ is an Egyptian manuscript, up to 20 metres in length, of magical spells written on papyrus that were commissioned by families upon the death of a loved one to guide them on their hazardous journey into the afterlife.


Amenhotep’s manuscript is particularly significant as it is an early example of a Book of the Dead manuscript that has several unusual features found on only four or five manuscripts ever found.

These include borders featuring five pointed stars and sun-disks along the top and bottom, and a large inscription in one line on the back of the papyrus, all of which indicates a person of considerable rank, wealth and importance.

Ms Bates said the Queensland Museum’s sections were donated and have been meticulously kept in the stores of the Museum for almost 100 years.

‘It is so gratifying to find that it is our own Queensland Museum team that have been the guardians of this tomb secret have perfectly preserved such incredibly fragile and rare artefacts for over a century.’

Ms Bates said the Queensland Museum would support future research into the Amenthoep ‘Book of the Dead’.

‘We’re proud the Queensland Museum will help close the book on this mystery,’ Ms Bates said.

Dr John Taylor said once back in London, he would like to start trying to piece the Queensland Museum fragments into the British Museum’s manuscript electronically.

‘Reuniting manuscripts like this is incredibly important and meticulous work and we hope by piecing together the fragments we will be able to see what mysteries they reveal,’ Dr Taylor said.

‘Archaeologists don’t find manuscripts like this so often nowadays. It is finds like this and bringing the pieces together that provide the most significant discoveries.’

‘Queensland can make a significant contribution in helping the world to better understand one of the most fascinating and sophisticated civilisations in the ancient world,’ Ms Bates said.

‘We have seen the awe and delight Mummy: Secrets of the Tomb has brought to so many Queenslanders already and for us to be able to share some of our own Egyptian treasures with the world is truly wonderful.’


Read more: http://www.dailymail.co.uk/sciencetech/article-2132755/Last-pages-magical-Egyptian-Book-Dead-museum-Queensland--worldwide-search-archaeologists.html#ixzz1t13pXYkS
Posted by arclein at 12:01 AM