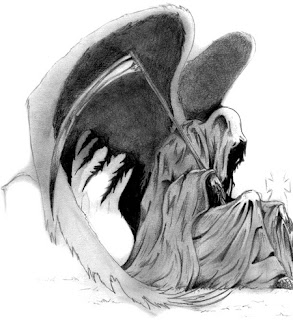 Science continues to struggle with the ancient themes of time and death. Yet existence means I am. That implies succession and that implies the observable arrow of time.

As suggested here, the energy of the mind and even our present existence can be identified and I will go further and present that it can be ultimately copied onto a permanent media and is been continuously copied as we would expect from an artificial storage media.

It is my contention that we will achieve this ourselves inside two generations. A more significant contention is that it has already been done and that is our personal destiny.

The purpose of the gift of faith is to allow the individual soul to avoid been sidetracked as there would otherwise be a lack of guidance on death.


Many of us fear death. We believe in death because we have been told we will die. We associate ourselves with the body, and we know that bodies die. But a new scientific theory suggests that death is not the terminal event we think.

Although individual bodies are destined to self-destruct, the “I” feeling is just a fountain of energy operating in the brain. But this energy doesn’t just go away at death.

One well-known aspect of quantum physics is that certain observations cannot be predicted absolutely. Instead, there is a range of possible observations each with a different probability. One mainstream explanation, the “many-worlds” interpretation, states that each of these possible observations corresponds to a different universe (the ‘multiverse’). A new scientific theory – called biocentrism – refines these ideas. There are an infinite number of universes, and everything that could possibly happen occurs in some universe. Death does not exist in any real sense in these scenarios. All possible universes exist simultaneously, regardless of what happens in any of them. Although individual bodies are destined to self-destruct, the alive feeling – the ‘Who am I?’- is just a 20-watt fountain of energy operating in the brain. But this energy doesn’t go away at death. One of the surest axioms of science is that energy never dies; it can neither be created nor destroyed. But does this energy transcend from one world to the other?

Consider an experiment that was recently published in the journalScience showing that scientists could retroactively change something that had happened in the past. Particles had to decide how to behave when they hit a beam splitter. Later on, the experimenter could turn a second switch on or off. It turns out that what the observer decided at that point, determined what the particle did in the past. Regardless of the choice you, the observer, make, it is you who will experience the outcomes that will result. The linkages between these various histories and universes transcend our ordinary classical ideas of space and time. Think of the 20-watts of energy as simply holo-projecting either this or that result onto a screen. Whether you turn the second beam splitter on or off, it’s still the same battery or agent responsible for the projection.

According to Biocentrism, space and time are not the hard objects we think. Wave your hand through the air – if you take everything away, what’s left? Nothing. The same thing applies for time. You can’t see anything through the bone that surrounds your brain. Everything you see and experience right now is a whirl of information occurring in your mind. Space and time are simply the tools for putting everything together.

Death does not exist in a timeless, spaceless world. In the end, even Einstein admitted, “Now Besso” (an old friend) “has departed from this strange world a little ahead of me. That means nothing. People like us…know that the distinction between past, present, and future is only a stubbornly persistent illusion.” Immortality doesn’t mean a perpetual existence in time without end, but rather resides outside of time altogether.

This was clear with the death of my sister Christine. After viewing her body at the hospital, I went out to speak with family members. Christine’s husband – Ed – started to sob uncontrollably. For a few moments I felt like I was transcending the provincialism of time. I thought about the 20-watts of energy, and about experiments that show a single particle can pass through two holes at the same time. I could not dismiss the conclusion: Christine was both alive and dead, outside of time.

Christine had had a hard life. She had finally found a man that she loved very much. My younger sister couldn’t make it to her wedding because she had a card game that had been scheduled for several weeks. My mother also couldn’t make the wedding due to an important engagement she had at the Elks Club. The wedding was one of the most important days in Christine’s life. Since no one else from our side of the family showed, Christine asked me to walk her down the aisle to give her away.

Soon after the wedding, Christine and Ed were driving to the dream house they had just bought when their car hit a patch of black ice. She was thrown from the car and landed in a banking of snow.

She never knew that her liver had been ripped in half and blood was rushing into her peritoneum.

After the death of his son, Emerson wrote “Our life is not so much threatened as our perception. I grieve that grief can teach me nothing, nor carry me one step into real nature.”

Whether it’s flipping the switch for the Science experiment, or turning the driving wheel ever so slightly this way or that way on black-ice, it’s the 20-watts of energy that will experience the result. In some cases the car will swerve off the road, but in other cases the car will continue on its way to my sister’s dream house.

Christine had recently lost 100 pounds, and Ed had bought her a surprise pair of diamond earrings. It’s going to be hard to wait, but I know Christine is going to look fabulous in them the next time I see her.