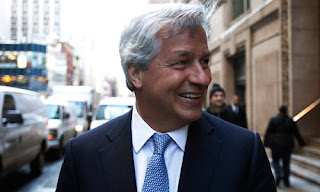 Fundamentally this is all about the inevitability of human nature. Lenders must not be allowed to speculate while those who speculate need to be constrained in terms of size by lenders and regulators. That was put into regulation after the 1929 collapse and abandoned only in 1998 under Clinton. Unsurprisingly inside a mere decade, we truly revisited 1929 in full and have had to print money like crazy to avoid a full press deflation.

The US economy remains unrepaired while the several too big to fail continue to destroy capital and are certainly in no creditable position to internally grow unless they accept larger and riskier bets. They all need to be broken up into units that can be allowed to fail.

Remember the USSR was too big to fail.

Experienced Wall Street executives and traders concede, in private, that Bank of America is not well run and that Citigroup has long been a recipe for disaster.  But they always insist that attempts to re-regulate Wall Street are misguided because risk-management has become more sophisticated – everyone, in this view, has become more like Jamie Dimon, head of JP Morgan Chase, with his legendary attention to detail and concern about quantifying the downside.

In the light of JP Morgan’s stunning losses on derivatives, announced yesterday but with the full scope of total potential losses still not yet clear (and not yet determined), Jamie Dimon and his company do not look like any kind of appealing role model.  But the real losers in this turn of events are the Board of Governors of the Federal Reserve System and the New York Fed, whose approach to bank capital is now demonstrated to be deeply flawed.

JP Morgan claimed to have great risk management systems – and these are widely regarded as the best on Wall Street.  But what does the “best on Wall Street” mean when bank executives and key employees have an incentive to make and misrepresent big bets – they are compensated based on return on equity, unadjusted for risk?  Bank executives get the upside and the downside falls on everyone else – this is what it means to be “too big to fail” in modern America.

The Federal Reserve knows this, of course – it is stuffed full of smart people.  Its leadership, including Chairman Ben Bernanke, Dan Tarullo (lead governor for overseeing bank capital rules), and Bill Dudley (president of the New York Fed) are all well aware that bankers want to reduce equity levels and run a more highly leveraged business (i.e., more debt relative to equity).  To prevent this from occurring in an egregious manner, the Fed now runs regular “stress tests” to assess how much banks could lose – and therefore how much of a buffer they need in the form of shareholder equity.

In the spring, JP Morgan passed the latest Fed stress tests with flying colors.  The Fed agreed to let JP Morgan increase its dividend and buy back shares (both of which reduce the value of shareholder equity on the books of the bank).  Jamie Dimon received an official seal of approval.  (Amazingly, Mr. Dimon indicated in his conference call on Thursday that the buybacks will continue; surely the Fed will step in to prevent this until the relevant losses have been capped.)

There was no hint in the stress tests that JP Morgan could be facing these kinds of potential losses.  We still do not know the exact source of this disaster, but it appears to involve credit derivatives – and some reports point directly to credit default swaps (i.e., a form of insurance policy sold against losses in various kinds of debt.)  Presumably there are problems with illiquid securities for which prices have fallen due to recent pressures in some markets and the general “risk-off” attitude – meaning that many investors prefer to reduce leverage and avoid high-yield/high-risk assets.


But global stress levels are not particularly high at present – certainly not compared to what they will be if the euro situation continues to spiral out of control.  We are not at the end of a big global credit boom – we are still trying to recover from the last calamity.  For JP Morgan to have incurred such losses at such a relatively mild part of the credit cycle is simply stunning.

The lessons from JP Morgan’s losses are simple.  Such banks have become too large and complex for management to control what is going on.  The breakdown in internal governance is profound.  The breakdown in external corporate governance is also complete — in any other industry, when faced with large losses incurred in such a haphazard way and under his direct personal supervision, the CEO would resign.  No doubt Jamie Dimon will remain in place.

And the regulators also have no idea about what is going on.  Attempts to oversee these banks in a sophisticated and nuanced way are not working.

The SAFE Banking Act, re-introduced by Senator Sherrod Brown on Wednesday, exactly hits the nail on the head.  The discussion he instigated at the Senate Banking Committee hearing on Wednesday can only be described as prescient.  Thought leaders such as Sheila Bair, Richard Fisher, and Tom Hoenig have been right all along about “too big to fail” banks (see my piece from the NYT.com on Thursday on SAFE and the growing consensus behind it).

The Financial Services Roundtable, in contrast, is spouting nonsense – they can only feel deeply embarrassed today.  Continued opposition to the Volcker Rule invites ridicule.  It is immaterial whether or not this particular set of trades by JP Morgan is classified as “proprietary”; all megabanks should be presumed incapable of managing their risks appropriately.

Dennis Kelleher and Better Markets are right about the broad need for implementing Dodd-Frank and they are particularly right about the problems that surround non-transparent derivatives (follow them @bettermarkets for some of the smartest lines and best links as the JP Morgan debacle continues to develop).  The Better Marketspress release on Thursday night put the entire situation in a nutshell:

“Jamie Dimon and JP Morgan Chase just proved what anyone not getting a paycheck from a Wall Street bank already knows: gigantic too-big-to-fail banks are too-big-to-manage.”

Anat Admati and her colleagues at Stanford (and her growing band of supporters in the US and around the world) are right about bank capital.  The people in charge of Federal Reserve policy in this regard are dead wrong – perhaps because they spend far too much time talking to Jamie Dimon and his fellow executives, while consistently refusing to engage with their better informed critics.

Ms. Admati skewered Jamie Dimon at length and in detail 18 months ago on exactly these issues.  You must read her original Huffington Post piece.  She has been relentless ever since – see this material.  She was right then and she is right now: we need much higher capital requirements and much simpler rules – focus on limiting leverage.  Big banks should be forced to become smaller – small enough and simple enough to fail.
It is time for the Federal Reserve to move its policy on these issues.