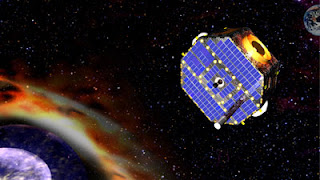 I had thought that the prediction of an energetic bow wave as at the least chancy simply because such a shock wave would emit and be observed here.  Where such shock waves are observed, it is because of these emissions.  It turns out that we have a bow wave and relative velocities are much lower than expected.

This suggests that we are still close to the apogee of our orbit through the Sirius cluster.  We have reversed course and are how travelling against the direction of the galactic rotation albeit slowly as yet.

This does suggest an alternative cause of the global heating observed in the Antarctic Ice Cores every 200,000 years or so.  The shock wave front is turned on as speed increases and it begins emitting in the infrared and this has the effect of warming the Earth a degree or so for a couple of thousand years.  It is in fact a much better explanation that a swift passage of a hot star that would only last a year or so.

The shock wave would become visible around 2000 years out or for only one percent of the total orbit.

The Sun moves much more slowly relative to nearby interstellar space than was previously thought, according to scientists working on NASA's Interstellar Boundary Explorer (IBEX) mission. Their study casts doubt on the existence of an abrupt "bow shock" where the edge of the solar system meets the interstellar medium – instead suggesting that the boundary between the two regions is much gentler than previously thought. The discovery could lead to a better understanding of how some cosmic rays can enter the solar system, where they pose a threat to space travellers.

Astronomers have always had good reason to believe the bow shock exists because similar structures can be seen surrounding nearby stars. But the new analysis of IBEX data – which has been carried out by David McComas of the Southwest Research Institute in , and an international team – suggests that the bow shock does not exist after all. In other words, the solar system is not moving as fast as we though relative to the interstellar medium.

Launched in 2008, IBEX orbits the Earth and is designed to study fast-moving neutral atoms. What McComas and colleagues did was to use IBEX to characterize neutral atoms from the interstellar medium that cross into the heliosphere. Because these atoms are not electrically charged, they are not affected by magnetic fields – and so their speed should correspond to the relative velocity of the interstellar medium.

The study suggests that the relative speed is about 84,000 km/h, which is about 11,000 km/h less than previously thought. In addition, data from IBEX and earlier Voyager missions suggest that the magnetic pressure found in the interstellar medium is higher than expected. When these parameters were fed into two independent computer models of the heliosphere, both suggested that a bow shock does not exist, but rather a gentler "bow wave" occurs at the interface.

"A wave is a more accurate depiction of what is happening ahead of our heliosphere – much like the wave made by the bow of a boat as it glides through the water," explains McComas.

According to McComas, decades of research based on the presumption of a bow shock must now be redone using this latest information. "It's too early to say exactly what these new data mean for our heliosphere," he says. Given that the heliosphere shields the solar system from some cosmic rays, McComas says "there are likely [to be] implications for how galactic cosmic rays propagate around and enter the solar system, which is relevant for human space travel".

The work is described in Science.
Posted by arclein at 12:00 AM