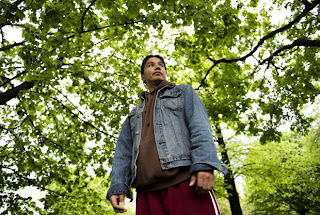 No one has to go quite to this extreme but there is a lot to learn here.  First of, it has all been done without exercise dominating one’s life.  As I learned with the Arclein diet which merely recognized that we are able to physically eat almost nine days of food every week in order to feel satiated and that simply omitting two day such as Tuesday and Thursday causes bodies to downward adjust to a proper weight.

Then he cut out the Wheat.  I am now convinced that is the crucial change that wonderfully eliminates the excessive production of belly fat.

I also like his grazing approach to food consumption.  Nuts, seeds and dried fruit makes this fairly easy and as he observes, he also just eats his staple of meat and wild rice.  Once prepared, these are easy to carry and work with.

My fasting for two days also mimics the natural hunter gatherer cycle in which trail food runs out and the hunter often has to pursue game for long stretches on the run.  No food could be ingested in the morning at the beginning of such a pursuit and no replacement would be plausible until hours later the game was brought down.

All such efforts are learning experiences and are welcome.

Yes to berries, no to salt: Aboriginal man goes back to his dietary roots in order to lose weight, live healthier

For 18 months, Bossy Ducharme has eaten the same 15 basic foods, day in and day out. A strict diet, including wild rice, raw pumpkin seeds, berries, and elk. No salt, pepper or sugar. If his aboriginal ancestors wouldn’t have eaten it, neither will he.

“I’m not going to put anything in my body that was not here before the Europeans arrived, because there is something wrong here,” said Mr. Ducharme, a Métis from Duck Bay, Man. “Ever since colonization, my people went from being a fit, athletic race of people to the most sickly and lame. The most obese. The highest diabetes rate… We went from eating our natural food to a diet completely different from 100 years ago.”

More than a third of Canadian aboriginals are obese, and about a fifth told the 2011 First Nations Regional Health Survey they had diabetes, according to its preliminary results.

Mr. Ducharme himself was 223 pounds, and managed to drop to 145 pounds, without exercising. He has more energy, and both a clearer complexion and mind, he says.

“But mostly it was that I felt so present in my daily life,” he said. “That is definitely something that I wouldn’t have anticipated before starting this.”

Mr. Ducharme, who is in his 40s, has been filming his dietary journey, with the hopes of making a documentary, and inspiring others to make similar changes.

He does not eat beef, chicken or pork (none of these are native to , he says), dairy, coffee and refined foods of any kind.

Even bannock, a heavy bread traditionally eaten by indigenous peoples in , is off-limits, says Mr. Ducharme.

“The bannock of today is made from white bleached flour, mixed with salt and lard and yeast to make it rise… my own people think it’s traditional and it’s not. And it’s certainly not good for us native people,” he says.

Mr. Ducharme’s diet is not what his family ate while growing up in suburban Winnipeg, said his brother, Ronald.

“It wasn’t very easy for us to eat as healthy,” he said. “When you are born into poverty, you kind of eat what you can afford. You spend the money on bigger portions — the pastas, the sugars. That was our diet and our upbringing.”

Mr. Ducharme in particular had a hefty appetite. When someone couldn’t finish their food at their family dinners, they would say “Oh, give it to Bossy. He’ll eat it,” said Ronald, a paramedic.

‘When you are born into poverty, you kind of eat what you can afford’

When his brother came to visit him in last December, looking slim and shunning the Fried Chicken they would often eat together, Ronald was surprised. Even when surrounded by a dozen family and friends and greasy fare, Mr. Ducharme did not waver.

“While we were eating toast and pizza and chicken and Chinese food, sitting in the midst of everyone else he was just eating his fish and his berries,” he said.

Mr. Ducharme transformed his diet after a health scare – and a nightmare. In 2007, his doctor told Mr. Ducharme, then a generally sedentary office manager, he was, at 5’9” and 223 pounds, obese.

One night, he had a vivid dream that he died. He still remembers the feeling of staring at his dead body, as he floated away.

When he awoke, he cried on his bedroom floor for hours, he says. And he vowed to make a fresh start.

Mr. Ducharme began to think about how his ancestors lived, and about what would happen if he re-connected with their old food traditions. He started researching what aboriginal peoples would have eaten before colonization, flipping through books in libraries, surfing on the internet, and asking everyone he knew.

He discovered that there was no agreement on what a traditional indigenous diet was, so he created his own.

Over the next three years, Mr. Ducharme prepared for his diet, by researching, saving up and slowly adjusting his food choices, while revamping other parts of his life. He was no longer working at his office job, but worked odd jobs to support himself. He also saved up to go back to school and study documentary film, building upon his past experience as an actor on television and the stage.

Mr. Ducharme began his diet on Sept. 21, 2010. The date was specifically chosen because it marks the fall equinox. “It’s a time of change, traditionally,” said Mr. Ducharme.

He had been slowly weaning himself off his favourite foods in the months before, but going cold turkey was a shock. The self-confessed “saltaholic” says everything felt tasteless.

“My tastebuds had been spoiled by a lifetime of processed foods,” he said. “After a month of everything tasting the same, I was like, ‘I don’t know if I want to do this.’ I wanted to lick the curb, [because] I was craving salt. I was smelling food from a mile away.”

After a month, Mr. Ducharme’s tongue began to adjust. Now, he no longer likes the taste of prepared food.

“Everything tasted as it should. And I liked it,” he said.

But the diet took its toll on his disposition – he was constantly hungry, moody, and emotional. His friends stopped eating their luscious meals in front of him to avoid tempting him, or taunting him with what he could not indulge in.

He could rarely order food at restaurants that adhered to his strict requirements, so Mr. Ducharme carried seeds, rice and berries in Rubbermaid containers everywhere he went.
Eventually, he discovered the solution to fending off hunger and his mood swings was to eat all the time. He no longer had breakfast, lunch and dinner – his portable buffet enabled him to eat whenever hunger struck him.

Mr. Ducharme buys buffalo, elk and other wild game from the vendors at St. Lawrence Market, one of the few places in that offer it. He also buys wild rice, pumpkin seeds, and maple syrup there, but would rely on markets in his neighbourhood for berries and indigenous vegetables.

His diet follows an ancient pattern, but he still uses modern cooking tools – such as a blender for berry smoothies.

“My ancestors didn’t have blenders, but, I didn’t say I was going to cook like them. Just eat what they ate,” Mr. Ducharme wrote on his blog. “I also use a slow cooker, for my meats, which makes my life so much easier.”

The cost of buying healthy foods, however, can add up. Mr. Ducharme said he is not a status Indian, and he does not have some of the financial supports offered to other aboriginal groups. He now works at a industrial installer, which helps set up new retail stores, to pay for his living expenses and for continuing education film courses at George Brown.

Friends and family periodically buy rice for him. He even snagged a sponsor, Meadowview Honey, which gave him maple syrup.

“It’s a lot easier to eat unhealthy… but I’m the average person. And I’m not privileged, and I did it. I know it can be done.”

In mid-February, Mr. Ducharme began to add so-called regular food, in small portions, back into his diet. He says he wanted his documentary to show the effects of returning to a normal diet.

Mr. Ducharme plans to return to his traditional diet by June. He intends to stick with it until at least 2014, when he plans to submit his documentary to the Sundance Film Festival. He may continue with his strict eating habits beyond that, but he says he is taking it one step at at time.

He is also seeking funding for his documentary, and is fundraising for a trip to , where he has been invited to speak to the Maori community about his traditional diet.

In any case, Mr. Ducharme has already made an impact on his own family.

His brother Ronald has started buying more fruits and nuts as snacks for his family of three kids and has shrunk from 255 pounds to 218 pounds on his 6-foot frame. Their younger sister, Beatrice, also switched pop for water, started exercising and has dropped about 20 pounds, Ronald says.

“He changed our immediate family’s view on eating … my kids are going to have a different [mentality]. We’re going to change that in our generation. It hasn’t been changed since my grandma. My grandma passed that on to my mom, and my mom passed that down to us. And it would definitely pass on to my kids. So, this [change] definitely helps.”