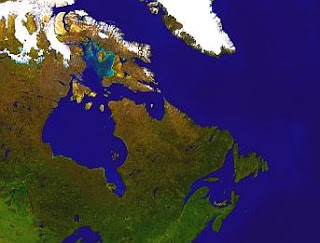 One poorly explored topic in the geological sciences is that of catastrophic land subsidence. I have argued in previous posts that an event that I have named the Pleistocene Nonconformity around 12900 BP was responsible for shifting the upper crust of the earth around thirty degrees south from the present North Pole to the center of Hudson Bay. This is a pretty extravagant claim but as it turns out, the alternative once clearly thought trough is even more extravagant. We will leave that for now, but a search of my blog under Pleistocene Nonconformity will do it.

Do note that the actual amount of compression was quite small. The shrinkage may have been less that several miles. Earth has experienced far worse though hopefully in slow motion.

What this all implies though is an equal magnitudinal subsidence on the other side of each crossing of the equator. In the Americas we have a good candidate in Cuba which sits athwart the movement arc and unexpectedly at right angles to the compression event. The same holds true near India were we have a submerged mountain chain as large as Japan in the Indian Ocean sitting opposite the Himalayas at a right angle.

It is noteworthy that a pretty detailed cultural record exists in Indian scripture that not only describes the upheavals but also adds plenty of additional detail.

What is not so obvious is that it also took time for the lands to settle down. Thus there was plenty of detail that is not understood yet. This included the rise of new river systems and additional subsidence as the elastic underpinnings of the crust itself readjusted.

Let us now set that aside and retreat to something we all can agree on. The Hudson Bay Basin has rebounded at least three hundred meters as the ice was removed. This rebound has been countered by some form of major elastic flow from an area close but that was capable of subsiding. The North Atlantic is the only such area available. Thus the argument that parts of the mid ocean ridge subsided cannot be dismissed. Not all of this subsidence would have occurred early on but much later and it is certainly plausible that it occurred in historic times.

What this means is that the two principal subsidence events from cultural sources have legitimate geological explanations and can be located and have been located.