George Sarton on History of Science 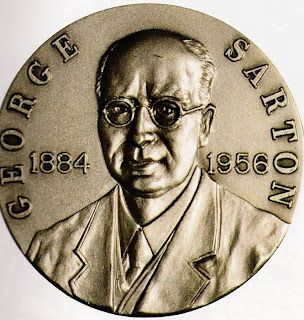 This is a smattering of quotations from George Sarton who addressed the history of science and clearly understood the true antiquity of science. The Greek world has grasped its prehistory and brilliantly transmitted it to us and others. It did not create its prehistory and Sarton makes that argument.

It is good to see even fifty years ago that some historians were grasping the reality of the Bronze age world and understanding its reach.

The real difficulty then was that carbon 14 dating was unadjusted and this made it look as if the European world seriously lagged the Mesopotamian world. That proved to be untrue, but the other shoe has yet to drop in terms of acceptance of the global Bronze Age led by European and Mediterranean exploration and exploitation.

Our problem is that we are presented with a mist once we look at Greek History and from that perspective nothing is discernible before Homer. Then we are and were told that little of consequence came before. That may be true for the Greeks but certainly not true for any number of other informants.

The preservation and organization of knowledge has been an ongoing challenge for humanity. Much was lost from the Roman world in particular but much less over the last few centuries. I suspect that the bulk of Atlantean lore survived in Egypt into the first Century AD. It is reasonable to assume that much of it was recovered and handed down by the scholars we know about.

The real problem was the preservation of documents in a script no longer in use at all. Once translated,, the originals would have been naturally abandoned.


George Sarton: The Father of the History of Science


"It is childish to assume that science began in Greece...." –- George Sarton, professor, History of Science (Harvard University), Ancient Science Through the Golden Age of Greece, April 18th 1951

"It is childish to assume that science began in Greece; the Greek ‘miracle’ was prepared by millennia of work in Egypt, Mesopotamia and possibly in other regions. Greek science was less an invention than a revival." -- George Sarton, professor, History of Science (Harvard University), Ancient Science Through the Golden Age of Greece, April 18th 1951


"Some of the conclusions reached by Eudoxos and Aristotle are still essential parts of the knowledge current today." -- George Sarton, professor, History of Science (Harvard University), Ancient Science Through the Golden Age of Greece, April 18th 1951


"We well know that whatever amount of civilization we enjoy today is the gift of many nations; we do not know so well that the same was already true thousands of years ago. Prehistorians have proven beyond doubt the existence of sophisticated cultures at very early times in many places." -- George Sarton, professor, History of Science (Harvard University), Ancient Science Through the Golden Age of Greece, April 18th 1951


"Some people are more advanced than others, nor do they all pass through the same stages. The passage from nomadic to settled life occurred many millennia ago in some places, yet it has not been completed today by the Arab Bedouins." -- George Sarton, professor, Historian of Science (Harvard University), Ancient Science Through the Golden Age of Greece, April 18th 1951


"No savages have ever been found near water who were not able to navigate it...." -- George Sarton, professor, History of Science (Harvard University), Ancient Science Through the Golden Age of Greece, April 18th 1951


"According to the Norwegian archaeologist Anton Wilhelm Brogger, there was a golden age of oceanic navigation during the period roughly defined as 3000 to 1500 B.C., that is, before the days of Phoenecian navigation." -- George Sarton, professor, History of Science (Harvard University), Ancient

"We have already referred to the prehistoric knowledge of herbs and other drugs, knowledge distilled from immemorial empiricism, trial and error doggedly continued for hundreds and thousands of years. It is impossible for us to understand how such vague and casual experiments could be repeated long enough, their results taken note of and transmited from generation to generation, but the fact is there: our prehistoric ancestors, like the primitive people who can still be observed, had managed to try many plants and other objects and to classify them in various groups according to their utility or danger."


"We have already spoken of the stars. It was impossible for any reflective man to observe them night after night without asking himself a number of questions, which were primarily scientific questions."


"It is not necessary to emphasize the antiquity of Egyptian medicine...."


"The people [Darwinists] who speak of Hippocrates as the father of medicine should bear in mind that Hippocrates comes about half way between Imhotep and us. That would improve their perspective of ancient science."


"... will the scientists of the year 5000 think as favorably of our methods as we do ourselves?"


"Some readers having at the back of their minds the prejudice that science is a Greek invention (have not scholars repeated that for centuries?) will insist and say, 'That may be science, but not pure science.' Why not? At the end of his admirable investigation of the Smith papyrus, Breasted concluded: Indeed these two men, the surgeon who was the original author of the treatise, and his later successor, who wrote the glosses forming the ancient commentary, both living in the first half of the third thousand years B.C., were the earliest known natural scientists. In the long course of human development they are the first men whom we can see confronting a great body of observable phenomena, which they collected and stated, sometimes out of interest in scientific truth, as inductive conclusions which they drew from observed fact."


"Let us repeat once more that the whole Greek science (as opposed to Hellenestic and Roman science) was developed in a period of time that was not only preceded but followed by Mesopotamian (and Egyptian) activities. If we replaced time by space, we might visualize Greek science as a small island surrounded by an Oriental sea."


"'Babylonian' science is prior to the first millenium, that is, it is completely prior to Greek 'historic' times, prior to Homer and Hesiod, not to mention the Ionian philosophers."

Posted by OilIsMastery at 8:56 AM
Labels: George Sarton, History of Science