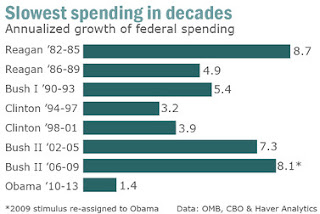 It appears that Obama’s apologists are learning well from Enron and Bernie Madoff.  We all sat and watched the vigorous dispensing of coin go on for a full year before the politicians became a little nervous.  Now they want us to believe it simply did not happen.  What was that old canard about the big lie?

Not only did the money get spent, it was managed by our favorite managers of fiscal prudence, the politicians themselves.

The first wave under Bush provided loans to shore up the banks in the face of what was effectively a run on those banks caused by the destruction of reserves by the sub prime disaster.  The second wave under Obama was a shoring up of corporate balance sheets in the face of poor lending conditions.

Both are necessary in the face of such conditions.  The problem is that there was no really good organization in place to oversee a lot of it and surely the politicians had too much to say.  The fact remains that this needs to be planned for with plenty of simulations in order to not have problems.

In fact it would be salutary to plan for such events and to establish the proper price to charge for the service.

WASHINGTON (MarketWatch) — Of all the falsehoods told about President Barack Obama, the biggest whopper is the one about his reckless spending spree.

As would-be president Mitt Romney tells it: “I will lead us out of this debt and spending inferno.”

Almost everyone believes that Obama has presided over a massive increase in federal spending, an “inferno” of spending that threatens our jobs, our businesses and our children’s future. Even Democrats seem to think it’s true.

But it didn’t happen. Although there was a big stimulus bill under Obama, federal spending is rising at the slowest pace since Dwight Eisenhower brought the Korean War to an end in the 1950s.

Even hapless Herbert Hoover managed to increase spending more than Obama has.
Here are the facts, according to the official government statistics:

• In fiscal 2012, spending is set to rise 0.7% to $3.63 trillion, according to the Congressional Budget Office’s estimate of the budget that was agreed to last August.

The big surge in federal spending happened in fiscal 2009, before Obama took office. Since then, spending growth has been relatively flat.

Over Obama’s four budget years, federal spending is on track to rise from $3.52 trillion to $3.58 trillion, an annualized increase of just 0.4%.

There has been no huge increase in spending under the current president, despite what you hear.

Why do people think Obama has spent like a drunken sailor? It’s in part because of a fundamental misunderstanding of the federal budget.

What people forget (or never knew) is that the first year of every presidential term starts with a budget approved by the previous administration and Congress. The president only begins to shape the budget in his second year. It takes time to develop a budget and steer it through Congress — especially in these days of congressional gridlock.

The 2009 fiscal year, which Republicans count as part of Obama’s legacy, began four months before Obama moved into the White House. The major spending decisions in the 2009 fiscal year were made by George W. Bush and the previous Congress.

Like a relief pitcher who comes into the game with the bases loaded, Obama came in with a budget in place that called for spending to increase by hundreds of billions of dollars in response to the worst economic and financial calamity in generations.

By no means did Obama try to reverse that spending. Indeed, his budget proposals called for even more spending in subsequent years. But the Congress (mostly Republicans but many Democrats, too) stopped him. If Obama had been a king who could impose his will, perhaps what the Republicans are saying about an Obama spending binge would be accurate.

Yet the actual record doesn’t show a reckless increase in spending. Far from it.

Before Obama had even lifted a finger, the CBO was already projecting that the federal deficit would rise to $1.2 trillion in fiscal 2009. The government actually spent less money in 2009 than it was projected to, but the deficit expanded to $1.4 trillion because revenue from taxes fell much further than expected, due to the weak economy and the emergency tax cuts that were part of the stimulus bill.

The projected deficit for the 2010-13 period has grown from an expected $1.7 trillion in January 2009 to $4.4 trillion today. Lower-than-forecast revenue accounts for 73% of the $2.7 trillion increase in the expected deficit. That’s assuming that the Bush and Obama tax cuts are repealed completely.

When Obama took the oath of office, the $789 billion bank bailout had already been approved. Federal spending on unemployment benefits, food stamps and Medicare was already surging to meet the dire unemployment crisis that was well underway. See the CBO’s January 2009 budget outlook.

Obama is not responsible for that increase, though he is responsible (along with the Congress) for about $140 billion in extra spending in the 2009 fiscal year from the stimulus bill, from the expansion of the children’s health-care program and from other appropriations bills passed in the spring of 2009.

If we attribute that $140 billion in stimulus to Obama and not to Bush, we find that spending under Obama grew by about $200 billion over four years, amounting to a 1.4% annualized increase.

After adjusting for inflation, spending under Obama is falling at a 1.4% annual pace — the first decline in real spending since the early 1970s, when Richard Nixon was retreating from the quagmire in .

By the way, real government spending rose 12.3% a year in ’s four years. Now there was a guy who knew how to attack a depression by spending government money!
Rex Nutting is a columnist and MarketWatch's international commentary editor, based in .

http://frontpagemag.com/2012/05/24/figures-dont-lie-democrats-do/
It’s been breaking news all over MSNBC, liberal blogs, newspapers and even The Wall Street Journal: “Federal spending under Obama at historic lows … It’s clear that Obama has been the most fiscally moderate president we’ve had in 60 years.” There’s even a chart!I’ll pause here to give you a moment to mop up the coffee on your keyboard. Good? OK, moving on …This shocker led to around-the-clock smirk fests on MSNBC. As with all bogus social science from the left, liberals hide the numbers and proclaim: It’s “science”! This is black and white, inarguable, and why do Republicans refuse to believe facts?

Ed Schultz claimed the chart exposed “the big myth” about Obama’s spending: “This chart — the truth — very clearly shows the truth undoubtedly.” And the truth was, the “growth in spending under President Obama is the slowest out of the last five presidents.”

Note that Schultz also said that the “part of the chart representing President Obama’s term includes a stimulus package, too.” As we shall see, that is a big, fat lie.

In response, three writers from “The Daily Show” said, “We’ll never top that line,” and quit.

Inasmuch as this is obviously preposterous, I checked with John Lott, one of the nation’s premier economists and author of the magnificent new book with Grover Norquist: Debacle: Obama’s War on Jobs and Growth and What We Can Do Now to Regain Our Future

(I’m reviewing it soon, but you should start without me.)It turns out Rex Nutting, author of the phony Marketwatch chart, attributes all spending during Obama’s entire first year, up to Oct. 1, to President Bush.That’s not a joke.That means, for example, the $825 billion stimulus bill, proposed, lobbied for, signed and spent by Obama, goes in … Bush’s column. (And if we attribute all of Bush’s spending for the Iraq and Afghanistan wars and No Child Left Behind to William Howard Taft, Bush didn’t spend much either.)

Nutting’s “analysis” is so dishonest, even The New York Times has ignored it. He includes only the $140 billion of stimulus money spent after Oct. 1, 2009, as Obama’s spending. And he’s testy about that, grudgingly admitting that Obama “is responsible (along with the Congress) for about $140 billion in extra spending in the 2009 fiscal year from the stimulus bill.”

On what possible theory would that be Bush’s spending? Hey — we just found out that Obamacare’s going to cost triple the estimate. Let’s blame it on Calvin Coolidge!]\

Nutting’s “and not to Bush” line is just a sleight of hand. He’s hoping you won’t notice that he said “$140 billion” and not “$825 billion,” and will be fooled into thinking that he’s counting the entire stimulus bill as Obama’s spending. (He fooled Ed Schultz!)

The theory is that a new president is stuck with the budget of his predecessor, so the entire 2009 fiscal year should be attributed to Bush.

But Obama didn’t come in and live with the budget Bush had approved. He immediately signed off on enormous spending programs that had been specifically rejected by Bush. This included a $410 billion spending bill that Bush had refused to sign before he left office. Obama signed it on March 10, 2009. Bush had been chopping brush in for two months at that point. Marketwatch’s Nutting says that’s Bush’s spending.

But on Jan. 12, 2009, Obama asked Bush to release the remaining TARP funds for Obama to spend as soon as he took office. By Oct. 1, Obama had spent another $200 billion in TARP money. That, too, gets credited to Bush, according to the creative accounting of Rex Nutting.

There are other spending bills that Obama signed in the first quarter of his presidency, bills that would be considered massive under any other president — such as the $40 billion child health care bill, which extended coverage to immigrants as well as millions of additional Americans. These, too, are called Bush’s spending

Frustrated that he can’t shift all of Obama’s spending to Bush, Nutting also lowballs the spending estimates during the later Obama years. For example, although he claims to be using the White House’s numbers, the White House’s estimate for 2012 spending is $3.795 trillion. Nutting helpfully knocks that down to $3.63 trillion.

But all those errors pale in comparison to Nutting’s counting Obama’s nine-month spending binge as Bush’s spending.

If liberals will attribute Obama’s trillion-dollar stimulus bill to Bush, what won’t they do?
Posted by arclein at 12:00 AM