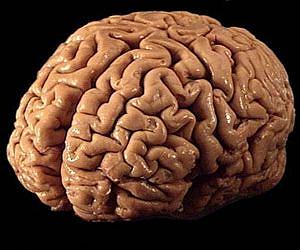 Recall that domestication of our key grains and other foods involved the successful application of polyploidy which entailed simply doubling up the chromosome content of the cell. So though this is clearly not the same, it is still involved expansion and supported domestication.

This does finally provide us with the pathway that led so quickly to the modern human brain. Once that was in place, the rest of the task evolved around actually supporting such a valuable tool and that also took evolutionary time.

It is also worth noting that the changes were unusual and the structural effects surprising. What more do we not know and what other changes could be safely contemplated once we understand all out potentialities?

We are also learning a lot more about the nature of 'mutation' that we can apply elsewheere.

The researchers don't think SRGAP2 is solely responsible for that brain expansion, but the genetic interference does have potential benefits.

A partial, duplicate copy of a gene appears to be responsible for the critical features of the human brain that distinguish us from our closest primate kin. The momentous gene duplication event occurred about two or three million years ago, at a critical transition in the evolution of the human lineage, according to a pair of studies published early online in the journal Cell, a Cell Press publication, on May 3rd.

The studies are the first to explore the evolutionary history and function of any uniquely human gene duplicate. These "extra" genes are of special interest as they provide likely sources of raw material for adaptive evolutionary change. Until now, studying them has been a technical challenge because they are nearly indistinguishable from each other.

"There are approximately 30 genes that were selectively duplicated in humans," said Franck Polleux, an expert in brain development at The Scripps Research Institute. "These are some of our most recent genomic innovations."

Intriguingly, many of these genes appear to play some role in the developing brain. Polleux and Evan Eichler, a genome scientist at the University of Washington, focused their expertise and attention on one of the genes known as SRGAP2. This gene has, in fact, been duplicated at least twice during the course of human evolution, first about 3.5 million years ago and then again about 2.5 million years ago.

The new work shows that the second and relatively recent duplication event produced only a partial copy of the gene. This copy acts at exactly the same time and place as the original, allowing it to interact with and block the ancestral gene's function.

Interestingly, the novel gene appears to have arisen just as the fossil record shows a transition from human's extinct Australopithecus ancestors to the genus Homo (as in Homo sapiens), which led to modern humans. That's also when the brains of our ancestors began to expand and when dramatic changes in cognitive abilities are likely to have emerged.

The researchers don't think SRGAP2 is solely responsible for that brain expansion, but the genetic interference does have potential benefits. Polleux and colleagues mimic the function of the human-specific SRGAP2 duplication in mice. They show that loss of SRGAP2 function accelerates neurons' migration in the developing brain, potentially helping them reach their final destination more efficiently.

Moreover, neurons that have decreased SRGAP2 function, due to expression of the human-specific SRGAP2 display more knob-like extensions or spines on their surfaces, making the neurons appear much more like those found in the human brain. These spines enable connections between neurons to form.

In addition to providing insight into the origins of the modern human brain, the findings offer clues to the neurodevelopmental disorders that humans are so prone to developing, including autism, epilepsy and schizophrenia, in which development of neuronal connections is affected. The researchers point to known cases of humans with structural brain defects and other symptoms that can be traced to disruption of the ancestral SRGAP2. They now intend to search for people carrying defects in the human-specific 'granddaughter' copy as well.

If this gene duplication did indeed produce an immediate effect during evolution as Eichler and Polleux suspect, they expect there must have been a fascinating period in human history characterized by "huge variation" in human cognition and behavior.

SRGAP2 and other human-specific gene duplicates might also help to explain the big differences between humans and other primates, despite few apparent differences in our genome sequences.

"We may have been looking at the wrong types of mutations to explain human and great ape differences," Eichler says. "These episodic and large duplication events could have allowed for radical - potentially earth-shattering - changes in brain development and brain function."