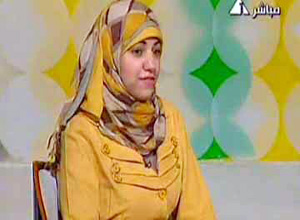 This is a great story and may even have some practical merit. I am more inclined to think that our most effective option once in space will be to harness the prevailing Magnetic field throughout the Solar System using whatever unlimited source of energy we have developed then.

It is also promising that the State of Egypt has found it possible for a talented young girl to advance in terms of science studies and even research. One always hears about the difficulties of the untalented when it will be the availability of talent that makes the future.


In the meantime, this lady will surely attract support for a full scholarship to a major western university.


An Egyptian physics student has successfully created a new propulsion device that could accelerate space probes and artificial satellites through quantum physics and chemical reactions instead of the current radioactive-based jets and ordinary rocket engines.


Aisha Mustafa, who has entered the active research area of spacecraft propulsion by her newly invented device, told the governmental EGYNews agency that she patented her invention last February in the Egyptian Academy of Scientific Research and Technology (ASRT).


Mustafa’s propelling device is based upon a scientific mix between quantum physics, space technology, chemical reactions and electrical sciences. Current space probes, artificial satellites, spacecrafts and space vehicles use rocket gas engines that depend on forcing a gas to the outside of the vehicle at a supersonic speed or the chemical reactions rockets which propel by solid or liquid fuels such as radionuclide or petroleum, or the electrically-propelled probes which depend on thrusting force via accelerating ions.

On the contrary, Mustafa’s invention powers space vehicles by benefiting from the electric energy formed by Casimir-polder force which occurs between separate surfaces and objects in a vacuum and by the zero-point energy which is considered to be the lowest state of energy. Mustafa added that she used reflective panels for additional force which looks like photovoltaic solar cells. The invention is related to a hypothetical concept of a jet propulsion called “Differential Sail”, which was theoretically created by NASA’s retired professor Marc G. Millis who led NASA breakthrough propulsion physics project.


In a televised interview with the famous Egyptian morning programme “Sabah El Kheir Ya Masr” (Good Morning Egypt), Mustafa, who studies physics in Sohag University, expressed her appreciation to her faculty and university staff for their efforts in helping and providing her with the materials and resources needed. Yet, at the same time she expressed her depression and sadness for the lack of a space sciences department in the Egyptian universities.


“Departments of astronomy and physics are only available. Although they are related to space sciences but unfortunately they aren’t into the specific field of my invention and they can’t practically test or implement it.”


The 19-year old girl said that lacking of a department for space sciences prevents further national research in this important field and acts as an obstacle for her to continue conducting her studies in this specific area.


According to an Egyptian TV channel, “Egypt 25”, Mustafa’s supervisor, Dr. Ahmed Fikry, who heads the physics department in Sohag University, has shown great interest in his student’s invention and helped her patent it in the ASRT. “I expect this invention to be highly beneficial in several fields and areas of industries,” he assured.

On his behalf, the President of Sohag University, Dr. Nabil Nour Eldin Abdellah, said that the university facilitates what he called “Science Clubs” for intelligent and creative students who have the will and capabilities to come up with innovative scientific ideas.

“Once we knew about her (Mustafa’s) invention, we encouraged her and provided her with the budget needed through the Science Club for innovative students in the university. This is the case with any other creative student,” Abdellah explained.

The scientific field of space vehicles propulsion is astonishingly rocketing and it gains a wider attention worldwide, thanks to its vital importance for other sciences like engineering, astronomy, geology, industry and others. This is in addition to the vast areas of researches it covers and the high probability of brainstorming new creations, methods and creative tools.


Events like the retirement of NASA’s vehicle of space shuttle programme and the need for new methods for space travel at a faster, safer, cheaper and easier means pushes forwards conducting more and more researches in the field of space vehicles propulsion.

Currently, there are dozens, if not hundreds, of ideas for innovative propulsion systems which are either presently in use or in progress, or which are still eras or even a millennium-far away from our modern technologies.


One of these methods for interplanetary and interstellar travels is the “solar sail” which depends on stellar radiation pressure or laser upon ultra-thin mirrors which work like ship sails. Other accelerating methods make use of the fourth state of matter, “plasma” by thrusting and pulsing.


Mustafa nowadays aims at testing her invention at major scientific research organisations, hence the possibility of applying it in upcoming space missions.


In the next coming decades, space travel would be easier, safer, faster and cheaper, thanks to the mind of an Egyptian girl.