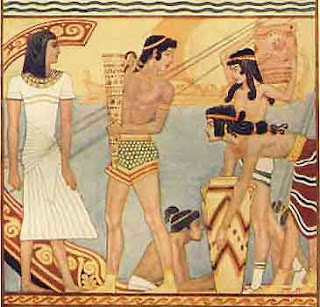 This is a worthy note. Homer's work established a base for the Greek language and in the process it effectively introduced the revolutionary Greek alphabet. This alphabet was likely a late emergence of the Atlantean Age which ended one generation after the events of the Homeric texts. The proper dates have been shown to be about 1180 BC for Troy's defeat and 1159 BC for Hekla's eruption. It is reasonable to presume that the texts may have been written down as early as that generation for the Atlantean court and then transmitted to Athens and Mycenae and Ionia. It may have then been translated and polished in Ionia to meet local needs.

All of western civilization began from this act of preservation as the Atlantean world collapsed around them just as acts of preservation saved for us the remnants of Rome in Ireland and Scotland in particular and through other monastic centers.

If we ever recover any of those ancient gold copper sheets, it may turn out that they are written in passable Greek in a recognizable alphabet. It is at least a plausible prospect however unlikely it may appear.

There is good reason to think that the whole Homeric epic took place originally in the Baltic Sea rather than the Aegean. This suggests that the epic was used to name new city foundations from time to time. At the time of the events, the Aegean was at the center of the Atlantean – Minoan world and had been for a couple of millennia. Thera was the main naval base. We really know this today from frescoes out of Thera. There is no way that an Ionian city could have been attacked and besieged in the face of Atlantean naval forces.

This strongly suggests that the collapse of 1159 BC drove the Hellenes out of the Baltic as their crops failed completely in their ships to invade and resettle in the Aegean in particular. We can presume many other groups along the Atlantic littoral made the same decision and this includes the Philistines with their Irish warrior Goliath.

It is reasonable that Athens and Mycenae and even several other foundations were Atlantean trading factories that became centers handling the huge influx of new settlement.

Thus the last wave of the Sea Peoples was a desperate scramble out of northern Europe to establish new settlements.

George Sarton: What Did Homer Teach?


"What did Homer teach? In the first place, he taught the Greek language. His immortal works helped to standardize that language, or rather to lift it up to that level of excellence and dignity which can be reached only by means of literary masterpieces. His writings became for the Greek people a kind of Bible, to which they were always ready to listen and which gave them and their children patterns of honor, of good breeding, and of good language. In spite of its mythological contents, the Bible was a lay Bible; that is, there was nothing sacerdotal in it, and it was remarkably free of magic and superstitions. The Ionian poet was truly an ancestor of the Ionian scientists whose achievements will be explained later. In the second place, the Iliad and the Odyssey taught history, the history of the Minoan and Mycenaean origins, which were in some respects dim and distant, yet in other respects near enough in the form of tools, usages, words, and folklore to be easily recognized and understood by the listeners. It is the very function of epic poetry to record the past for posterity and prevent it's oblivion."

"Homeric poetry offers us a mirror of the Mycenaean age, which was then vanishing, yet was vividly and joyfully remembered by the old people and the minstrels. Like every epic, it was turned toward the past; it is thus a little paradoxical to call it the harbinger of a new age. It is a climax or an ending rather than a beginning yet it proivided the new people, the Greeks, with a solid foundation upon which to establish a new culture; it provided them with a standard of propriety and a guide of conduct; it gave them pride and dignity. To put it otherwise, I am more and more convinced that the Greek culture of Homeric days was not something radically new but rather a second growth of the Aegean culture which had been completely destroyed, however; consider, for example the rich growth of plants in a region devastated by volcanic eruptions or desiccated by a long drought. One might think that everything is dead, but it is not. Life is dormant and may remain so for a long time, yet let the blessed rain fall and the mercy of heaven permit it, and it will soon reappear as vigorous as ever. Much is lost in the process, of course, and new elements are mixed with the old ones. The new Greek culture was a revival of the old one; that revival was deliberate, at least from the point of view of the minstrels and their patrons. It was different in many respects from the Aegean one, for the conditions of life were deeply modified. For one thing this was the age of iron; the days of bronze could never come back."

Posted by OilIsMastery at 10:08 AM
Labels: George Sarton, Homer
Posted by arclein at 12:00 AM