Butterflies Break out of Refugia 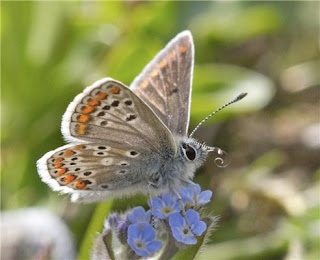 This is a delightful item in which another unexpected species response successfully to a marginal existence by adapting to a new food supply. I do not think that the geranium is native to England at all. However a glance at Wikipedia determines that it is widespread, but mostly dominant in the Eastern Mediterranean. That still suggests no lack of native cultivators so this recent adaptation appears a bit surprising.

However, it is also possible that the little Ice Age drove them into their refugia and that it took a fair bit of time to relearn the full extent of its natural range. This is worth keeping in mind when noting other expansions.

No way to prove any of this except to note the rather restrictive 'homeland' in the first place.

ScienceDaily (May 24, 2012) — A new study led by scientists in the Department of Biology at the University of York has shown how a butterfly has changed its diet, and consequently has sped northwards in response to climate change.

Their study is published in the latest issue of Science.

The researchers found that warmer summers have allowed the Brown Argus butterfly to complete its life cycle by eating wild Geranium plants. Because the Geraniums are widespread in the British countryside, this change in diet has allowed the butterfly to expand its range in Britain at a surprisingly rapid rate. Over the past 20 years, the Brown Argus has spread northwards by around 79 kilometres and has become common in the countryside in much of southern England.

Lead author PhD student Rachel Pateman, of the University of York's Department of Biology and the NERC Centre for Ecology & Hydrology, said: "Many species are shifting their distributions northwards as the climate warms, but this previously scarce species has surprised everyone by moving its range at over twice the average rate."

Co-author Chris Thomas, Professor of Conservation Biology at York, said: "Because wild Geraniums are widespread in the landscape, the butterflies can now move from one patch of host plants to next and hence move rapidly through the landscape -- expanding their range generation after generation."
Co-author David Roy, from the NERC Centre for Ecology & Hydrology, said: "The change in diet represents a change to the interactions between species -- in this case between a butterfly and the plants that its caterpillars eat -- caused by climate warming. Changes to the interactions between species are often predicted to alter the rate at which species shift their distribution in response to climate change; and now we have demonstrated this in nature."

In the 1980s the butterfly was considered scarce in Britain, with populations undergoing continued decline but it has subsequently undergone a dramatic reversal of fortune. The team put this down to the effect of climate on the ability of the butterfly to use additional food plant species.

In the 1980s, the caterpillars were mainly confined to Rockrose plants growing on the chalk hills of southern England, but the use of plant species in the Geranium family has increased as summer temperatures have increased. Wild Geraniums are suitable food plants for the caterpillars in warm years, but not in colder summers. This seems to be because the plants grow in different places, which provide different microclimates. Common Rockrose is found mainly on hot south-facing slopes, where the butterfly can complete its life cycle even in cool summers. This is not the case for the Geraniums and so they only become suitable for the butterfly when summers are warm.

Co-author Richard Fox, from the charity Butterfly Conservation, said: "It is important that we understand how and why species are responding to climate change. Such research would not be possible without the thousands of records of butterflies our dedicated volunteers have collected over many decades, which have allowed us to detect these long term changes."

Co-author Professor Jane Hill, of the Department of Biology at the University of York, said: "There will be winners and losers from climate change. It is important that we begin to understand how the complex interactions between species affect their ability to adapt to climate change so we can identify those that might be at risk and where to focus conservation efforts."
Posted by arclein at 12:00 AM