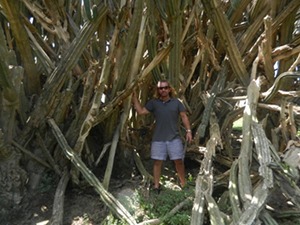 I have written about this plant many months back, and since then, it has become available in health supplement stores everywhere in a range of concentrations and quality.  It should be possible to get it easily.

The plant itself is now been successfully cultivated and I suspect supply has become ample.  Everyone understood immediately that the real market would be huge and acted accordingly.  In time it will be cheaply available.  It may end up been freshly available like so many herbs.

The key of course is that it nicely suppresses appetite.  It actually does it very well without any negative effects.  It is one of those few unique solutions that kills the category and which no one can actually patent.  I was there once before in the introduction of shark cartilage that led the introduction of the use of the Glucosome - Condriten protocol for cartilage erosion.

The spiny, cactus-like plant grows very slowly, so I was surprised to find a huge wall of it near the side of the road. Dr. Kizito told me it was at least a hundred and maybe 200 years old.

“This is the first time I’ve ever seen one.”

I was dwarfed by this giant cactus stand.

“It’s an endangered plant, but you wouldn’t know it from looking at this.”

I stood there, staring up at the 20-foot-high wall of spiny, cactus-like arms. The clusters were huge. I didn’t expect to see it growing right here by the side of the road.

When I jumped at the chance to drive in Africa, Dr. Kizito didn’t expect me to keep pulling the car over to see all of the interesting plants.

What I hadn’t noticed was that his BMW was a stick shift. It made driving a little more tricky because the steering wheel was on the opposite side of the car.

I’ve had the experience of driving on that side of the road before, but this was the first time I’d ever driven a stick. It was hard for me because I’m used to steering with either hand, no problem. What got me was steering with my right hand and shifting with my left.

Learning the pattern with the other hand while driving on the wrong side of the road was tricky. It felt surprisingly awkward and I didn’t feel like I had the coordination to shift gears.

It became easier to drive when we got out of East London.

I had come to South Africa from Uganda because an herbalist there whom I had met, Dr. Mawanda, told me that the best herbalist in South Africa was a friend of his. He introduced me to Dr. Kizito over the phone, who said, “Come see me, I have many things to show you.”

This is where he brought me. Dr. Kizito took my photo in the middle of the giant plant and I said to him, “It’s very unfriendly looking.”

Even so, it’s one of the more famous plants in Africa. The most popular is probably the banana. Almost every African eats it every day. In fact, the word for “food” and “banana” in Uganda is the same: matooké.

But one of the most well-known is this prickly plant. It became probably the most famous appetite suppressant supplement of all time over the last few years.

Because of that, I can’t mention its name in this letter or the spam filters would send it right into your junk email file.

You see, whenever a supplement becomes very popular and many legitimate companies start selling it, there are always illegitimate companies who want to flood your inbox with ads trying to get in on the action. That’s what happened with this supplement, and now the big internet service providers won’t let any email with the name of the plant in it go through.

It’s sad because it’s a completely natural product that could genuinely help you.

The San Bushmen of the Kalahari Desert used it just the way you would. To take away the feeling of hunger. For thousands of years, when the men of the tribe set out on long hunting trips, they would eat a few bites of the plant – that’s also called Bushman’s Hat because of them – instead of bringing food with them.

They broke open the spiny stems, chewed some of the pulp and were on their way.

One animal study shed some light on why this might work so well. There’s a compound in the plant that seems to send more energy (known as ATP) to the energy-sensing part of the brain. If your brain has enough ATP, it won’t be signaling you to eat. In the study, the plant compound prompted the animals to eat 40%–60% less.1

When news of a natural appetite suppressant hit media outlets like 60 Minutes, the plant became very well-known. Everyone was trying to get a piece of it –pharmaceutical companies included.

You can get it in its natural form in appetite-control supplements, like my Native Slim.

Bushman’s Hat is one of the most important herbs I saw in Africa and I believe it could be helpful to people who want to slim down.

If you’re buying it as a supplement, you want to be sure you’re getting the right thing. There are 18 different species of the plant, and only the gordonii type was used for appetite suppression. So look for that word on the label.

Also, you want it to use the aerial parts of the plant – those are the parts that grow above ground, and not mixed with the roots. The succulent, juicy part that grows above ground is what the bushmen used.