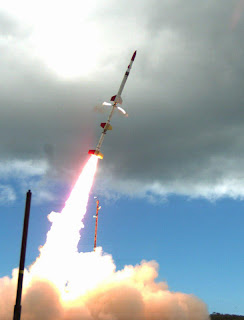 It is time to take notice that the evolution of the scram-jet engine is well underway and will surely yield an air breathing hydrocarbon solution for ground to space lift capacity. I personally think that larger will turn out to be easier to achieve.

A system may still need a subsonic piggy back lift to launch altitude, but that is well understood and pretty easy to engineer in, or at least it has been solved for a long time.

We can expect a scram-jet to pretty well stand on its tail and accelerate into space while chasing a diminishing air supply. Provided escape velocity is achieved, it can then coast into orbit. Even better, it can use engine drag to slow down and ultimately fly down to a landing.

At least we are now seeing a serious effort to progress this technology.


ScienceDaily (May 12, 2012) — A team that includes NASA and the U.S. Air Force Research Laboratory (AFRL) is celebrating the successful launch of an experimental hypersonic scramjet research flight from the Pacific Missile Range Facility on the island of Kauai, Hawaii.


NASA, AFRL and Australia's Defence Science and Technology Organisation (DSTO) are working with a number of partners on the HIFiRE (Hypersonic International Flight Research Experimentation Program) program to advance hypersonic flight -- normally defined as beginning at Mach 5 -- five times the speed of sound. The research program is aimed at exploring the fundamental technologies needed to achieve practical hypersonic flight. Being able to fly at hypersonic speeds could revolutionize high speed, long distance flight and provide more cost-effective access to space.

During the experiment the scramjet -- aboard its sounding rocket -- climbed to about 100,000 feet (30,480 meters) in altitude, accelerated from Mach 6 to Mach 8 (4,567 to 6,090 miles per hour; 7,350 to 9,800 kilometers per hour) and operated about 12 seconds -- a big accomplishment for flight at hypersonic speeds. It was the fourth of a planned series of up to 10 flights under HIFiRE and the second focused on scramjet engine research.

The HIFiRE 2 scramjet research payload included a hypersonic inward turning inlet, followed by a scramjet combustor and dual-exhaust nozzle. More than 700 instruments on board recorded and transmitted data to researchers on the ground. The payload was developed under a partnership between the AFRL and NASA, with contributions from the Navy's detachment at White Sands Missile Range, N.M. and ATK GASL located in Ronkonkoma, N.Y.

"This is the first time we have flight tested a hydrocarbon-fueled scramjet accelerating from Mach 6 to Mach 8," said NASA Hypersonics Project Scientist Ken Rock, based at NASA'S Langley Research Center in Hampton, Va. "At Mach 6 the inlet compression and combustion process was designed to reduce the flow to below Mach 1 -- subsonic combustion. But at Mach 8 flight the flow remained greater than Mach 1 or supersonic throughout the engine. So this test will give us unique scientific data about scramjets transitioning from subsonic to supersonic combustion -- something we can't simulate in wind tunnels."

The data collected during the execution of the HIFiRE experiments is expected to make a significant contribution to the development of future high-speed air-breathing engine concepts and help improve design, modeling, and simulation tools.

The success of the three-stage launch system, consisting of two Terrier boost motors and an Oriole sustainer motor, is another important achievement of the HIFiRE 2 mission. The HIFiRE 2 mission, the first flight of this sounding rocket configuration, opens the door for a new high--performance flight configuration to support future Air Force, Navy, and NASA flight research.

The HIFiRE team has already achieved other milestones such as the design, assembly and extensive pre-flight testing of the hypersonic vehicles and the design of complex avionics and flight systems. Demonstrating supersonic combustion in flight with a hydrocarbon fueled scramjet, compared to a hydrogen-fueled scramjet, is significant, according to researchers. While hydrogen fuel is more reactive, hydrocarbon fuel offers many benefits, including operational simplicity and higher fuel density so a hypersonic vehicle can carry more fuel. This represents yet another noteworthy achievement for the HIFiRE program, with additional test flights scheduled in the coming months and years.