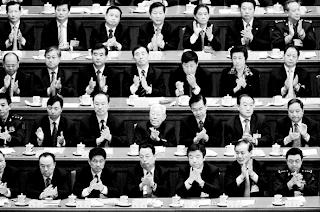 What gives this particular headline some credence is the particular fact that the secret police organization has been specifically neutralized ahead of the upcoming Party summit.  It is thus unimaginable that the new leadership will ever allow those rains to be loosened again as they could expect to be the first victims.

The other thing that gives this credence is the remarkable ideas been expressed at the very top regarding the future role of Christianity in itself.  This is not obvious but it reflects a subtle change in attitudes that is likely unstoppable.

These may be two palm trees in a windstorm now blowing through as yet unseen.  It is certain that the reformists have a firm grip on control right now and they are making sure nothing tips the cart over.

So we can be nervously optimistic that the greatest peaceful transition in the form of governance ever made in human history is about to happen.  It is never going to be easily topped.

Chinese delegates applaud the result of a vote during the Chinese Communist Party Congress at the Great Hall of the People on October 21, 2007, in . (Andrew Wong/Getty Images)

According to a high-level source in , key leaders in the Chinese Communist Party’s (CCP) Politburo have reached four points of consensus that will be announced on or around the 18th Party Congress. The tenor of the decision is that will take the path of democracy. The news has been circulated hurriedly in .

According to the source, the four points of consensus are:

2. It will be announced that the Chinese Communist Party has finished its historical mission as the ruling party. Party membership will need to be re-registered, with the free choice to re-enter the Party or leave it.

3. “June 4,” Falun Gong, and all groups who have been wrongly persecuted in the process of devoting themselves to ’s realization of democracy will be redressed and receive compensation.

4. The military will be nationalized.

The claim from the source cannot be verified, but it is said to be a matter of discussion among high-level leaders. The source also said that a democratic party has already been formed in the Beijing Academy of Sciences, and that over 30 scholars in the Academy have gotten involved in the movement, forming a “Chinese Scientists’ Liberal Democratic Party.”

The four points of consensus are supposed to be announced on or around the 18th Party Congress, according to the source. The congress is supposed to be held this fall, in October or November, though there have been rumors that it will be postponed amidst the current political uncertainty associated with Bo Xilai’s downfall.

Shi Cangshan, an independent analyst in responded to the news: “The domino effect set off by the Wang Lijun incident is still going on, and the Party’s behind-the-scenes operations are being exposed.”

Shi said that the reason Party leaders would want to announce four consensuses such as the above is to take the initiative on its inevitable decline. “The group that has engaged in these massive persecutions of the Chinese people, including the persecution of Falun Gong, is being exposed, and this is deeply implicated with the demise of the CCP. Better that they take the initiative, which will benefit themselves and the world.”