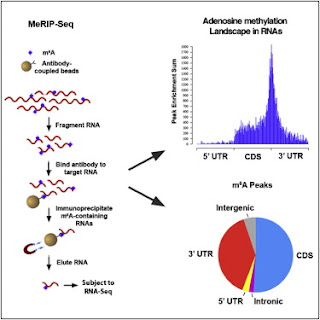 We just learned something very important in terms of the management of gene expression. Importantly, it is an ongoing process that can also be plausibly managed by the organism to achieve results.


What has always intrigued me in reviewing work around the operations of genetics has been the natural robustness and the actual lack of a absolutely clear idea of OFF and ON. What we get instead is an OFF bell curve and an ON bell curve. On top of all that it is not exclusively a binary process. Yet it is still a logic engine.


This may actually be the missing link in our understanding of the whole pattern. Something had to be changing in this way.


Tiny chemical changes that do not alter the sequence of our DNA but modulate how it works have been found to act on a new part of our genetic machinery. The discovery could provide insights into many health problems, including obesity.


It has been long known that DNA can be altered "epigenetically" – where changes occur without altering the sequence of DNA but leave chemical marks on genes that dictate how active they are by adding chemical methyl groups that silence genes, for example. Numerous environmental factors, such as stress and smoking, have been shown to influence these epigenetic marks.


Now, researchers have discovered that messenger RNA, the mirror-image copy of DNA from which all proteins are manufactured, can be methylated too.


"We've discovered something fundamental to biology," says Samie Jaffrey of Cornell University in New York, and head of the team that made the discovery. "It was there all the time and no-one knew about it."


Jaffrey's team found that around a fifth of the RNA produced in cells from rat brains and human kidneys contained methylated versions of adenosine, one of the four building blocks of our genetic code. "It was exciting to find that 20 per cent had methyl groups, so it must be a pretty fundamental regulatory mechanism," says Jaffrey.


Separate analyses of assorted rat tissues demonstrated that the methylated RNA was concentrated in the brain, liver and kidneys. Also, samples from rat embryos showed that concentrations rose 70-fold in the brain as it reached the final stages of growth, therefore they are likely to play a fundamental role in development.


The team also discovered that the methyl groups are stripped off the RNA by an enzyme linked with obesity. The enzyme is made by a gene called FTO, one variant of which raises the risk of obesity by 70 per cent. People with an overactive copy of the gene are most at risk, suggesting that stripping the methyl groups from RNA might somehow alter our metabolism.


The researchers found that methylated adenosine tended to cluster close to the point on the RNA strand where protein manufacture reaches completion, and on regions where other proteins bind to the strand to alter or halt production. The suggestion is that methylation may therefore dictate how much protein gets made, and when. "It's not changing what would be made, but it might govern how much and when it's made," says Jaffrey. This, he says, could in turn have a big impact on a multitude of physiological processes and disease.