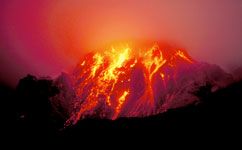 This is a wonderful tool and allows us to actually directly link real activity deep down to events been experienced on the surface were they could be measured. To start with, it clearly tells us that the Mt St. Helen’s eruption was both inevitable and predictable at the time had we had this knowledge.

At the time, I merely had to note that a half cubic mile of rock was been lifted at the rate of six feet per day to know that the potential energy been built up and would be released largely as kinetic energy. I knew with that information that I wanted to be a long ways away and the actual eruption was no surprise at all.

Most Volcanoes are not so generous in telegraphing their future, although it is clear that the geological community has taken its lesson and generally make sure quite early on that the surrounds are evacuated.

The really good news here is that it is becoming feasible to map movements and magnitudes within a magma chamber rather thoroughly and we are reaching a point in which we can start tracking the volumes necessary to trigger an actual eruption and to predict its ultimate size and nature. This is excellent news and in the future, it will become way more difficult to be surprised at all.

In truth, we have already saved thousands of lives and that can now only become better.

http://planetearth.nerc.ac.uk/news/story.aspx?id=1237&cookieConsent=A
Volcanologists have found a direct link between swarms of earthquakes at the surface of Mount St Helens in the US and injections of hot magma into its magma chamber.

The findings bring them a step closer to predicting when an explosive volcano like Mount St Helens might next erupt.

The UK-led team of researchers analysed tiny crystals in rocks erupted from the volcano. These crystals contain a record of events inside the magma chamber such as injections of hot magma or gas.
They found that injections of magma or gas into the chamber from deep within the Earth coincide with events at the surface, like swarms of earthquakes, ground distortions, or releases of gas at the surface. All are often a signal that the volcano is about to erupt.

'Now we have a powerful tool that will let us work out how events at the surface reflect what's going on inside the magma chamber,' says Dr Kate Saunders from the University of Bristol, lead author of the study, published in Science.

'Now we have a powerful tool that will let us work out how events at the surface reflect what's going on inside the magma chamber.'

Many volcanoes reveal signs of an imminent eruption. Despite this, volcanologists have struggled to understand how signals at the surface reflect what's going on inside the magma chamber directly beneath the volcano. Knowing what's happening below the surface is crucial for predicting when an eruption is more likely.

Now, for the first time, they have a tool that will help them read the signals, closing the gap between observation and interpretation of restless volcanoes.

They used a fairly new – and sophisticated – technique in volcanology, called diffusion geochronology.

Most volcanic crystals grow concentrically like tree rings, with zones which are made up of different chemicals. Each new zone reflects subtle changes in the pressure, heat or gas content of the magma it grew in.

So when hot magma is injected from deep beneath the Earth's surface into the magma chamber, a new zone is created in the crystals.

'The composition of each zone is related to the composition of the magma around it when it grew, so each zone acts like an archive of the crystal's growing medium, or magma,' explains Professor Jon Blundy also from the University of Bristol, co-author of the study. Once the crystals are expelled as lava in an eruption, all growth stops.

But this is just one aspect of diffusion chronology. Scientists can date the creation of the zones - and therefore when each magma injection happened – by the movement of trace elements between the zones.

Each element moves at a specific speed. Magnesium for example moves at a rate of about ten millionths of a metre per year.

If scientists know how far an element like magnesium has moved, they can work out how long ago a particular zone started growing.

'The movement of these elements can tell us how long since a particular zone was grown. Essentially the clock starts ticking when the new zone grows and stops at the moment of eruption,' says Blundy.

So, say the movement of magnesium tells them a new zone started growing five months ago, and there were swarms of earthquakes at the same time, the researchers can say that the two are linked.

Using this technique, Saunders, Blundy and colleagues worked out how crystal growth relates to events at the surface at Mount St Helens.

'We found a big spurt of growth before the big 1980 eruption. And we've shown that the process responsible for generating earthquakes at Mount St Helens is pulsing of magma into the chamber,' says Saunders.

The researchers say this technique could be applied to other volcanoes to understand how events at the surface reflect changes inside the magma chamber, and so reveal the inner workings of other explosive volcanoes.

Blundy says that crystals could ultimately reveal clues about the size of the magma chamber, as well as the conditions inside it.

'This technique heralds real advances in our understanding of how volcanoes work,' he says.