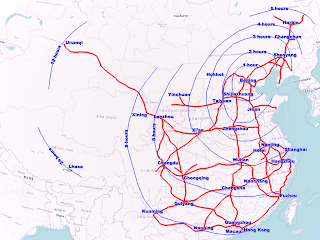 With question it was high time for to halt the breakneck expansion of its high speed rail system and allow the whole train to catch up to the engine.  There is nothing wrong with the technology or even the general plan itself.  The problem stems from the frantic pace of deploying resources and inevitable creep of corruption and expediency.  The pause, however brought about has surely allowed much of that to be sorted out.

It remains that is the best situated region in the world to realize on the advantages of mass production in this sector and taking special advantage of that is an excellent idea.

In terms of other markets, the market is a fraction of the Chinese need while is well built out on the prime routes.  That leaves which will surely arise as a direct competitor or major partner.  My real point is that there is no driving external market able to truly compliment this build out and perhaps just as well.  We will all gain for creating the capacity whenever we build the obvious short lines that can pay.

Thus the fact that they are allowing the train to move forward at a more acceptable pace is great news.

There are plenty of dream projects around the world but this need to be recognized for what they are as expensive ego trips.  However there is plenty to do before all urban centers that are five hundred miles apart are connected.  ’s task is to make it economically attractive.

The real technological challenge I would like to see addressed is the creation of an air pad system for freight traffic.  This would allow mile long container traffic to travel at close to an appreciable fraction of two hundred miles per hour also.  A thought design shows that it could well be feasible and certainly important in the especially.

to restore confidence in high-speed trains

BEIJING - China will continue with research and development into its new generation high-speed trains despite the industry's tarnished image due to a spate of operation faults last year, according to a plan for the country's rail traffic equipment manufacturing industry.

The new generation trains will run at speeds of more than 300 km an hour, according to the five-year plan for the industry for the 2011-2015 period, which was released by the Ministry of Industry and Information Technology on Monday.

The plan underscores the reliability, comfort and maintainability of passenger rail transportation equipment. It requires thorough research and development of key technologies and systems related to rail traffic.

The fast development of high-speed trains came under question after frequent operation failures and a fatal crash.

On July 23 last year, a high-speed train slammed into a stalled train  near the eastern city of , leaving 40 people dead and 172 injured. The incident was blamed on faulty signaling equipment.

Construction of high-speed trains and railways cooled sharply after the State Council, or 's cabinet, ordered slower operational speeds in the wake of the crash.

Some analysts then predicted the accident would hamper the nation's exports of high-speed train technologies.

But contrary to these concerns, China has continued to export a wide range of equipment including electric multiple units, urban rail vehicles, steam locomotives, large road maintenance equipment to many countries such as Russia, Australia, Brazil, India, Argentina, Turkey, Iran and Malaysia.

No one can compete on volume and cost in this industry.

"Compared to other high-end equipment manufacturing industries, the high-speed rail sector has a better industry foundation. It is also the easiest in terms of safety control," said Yuan Gangming, a researcher with .

From 2006 to 2010, enjoyed an average annual growth rate of 31.9 percent in the sales value of rail traffic equipments. The nation is capable of producing 2,000 high-power locomotives, 8,000 passenger rail vehicles and 60,000 freight wagons every year.

Nevertheless, like in other high-end equipment manufacturing industries, the nation lacks independent property rights in the rail transportation equipment sector.

For instance, about 80 percent of equipment that make integrated circuit chips were imported, according to previous media reports.

The nation has called for more investment and innovation to boost independent manufacturing. The plan revealed that in 2010, the nation's rail traffic equipment producers put nearly four percent of their sales revenue into research and development of new technologies.

The plan says that the nation's rail traffic will boom in coming five to 10 years with a large demand for various equipments. It estimates that the nation will consume more than 1,000 electric multiple units and about 5,000 locomotives from 2011 to 2015.

In recent years, urban rail systems have expanded fast across as stifling pollution and traffic congestion has become a development bottleneck of the world's second largest economy.

By the end of 2010, 13 cities opened 49 railways with a mileage of 1,425.5 kilometers. The lines are sprawling. China now tops the world in the construction of urban railways, with an average annual new mileage of 270 kilometers.

By 2015, the nation's urban rail system will have a total length of more than 2,700 kilometers, the plan says.

Meanwhile, overseas demand was forecast to grow as many countries are also building new lines or upgrading old ones.

The global rail traffic equipment market will grow by 3 percent on average each year by 2015, with an annual demand averaging more than 100 billion euros ($130 billion), the plan says, citing forecasts of the Association of the European Rail Industry.

In the five-year plan, the ministry predicted that the industry's annual sales value will exceed 400 billion yuan ($63 billion) every year and investment by backbone enterprises in research and development will exceed 5 percent of their annual sales by 2015.