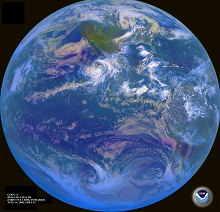 I never quite understood that the Gaia Hypothesis allowed specific predictions. I thought at the time that the premise was self evident and a nice idea, but likely unprovable. Since then I have come to understand that communication at the cellular level could be as interconnected as our internet and most likely is. The problem as you might well appreciate is always to figure out just what to do with it all.

This work establishes that tracking sulfur isotope differentiation through land, sea and air could allow us to piece together one of the key predictions made from the Gaia Hypothesis.

A Gaia paradigm encourages responsible husbandry, sorely lacking in the past and now steadily gathering momentum in the other direction. Mankind is slowly relearning that his central role in terms of living on Terra is to provide good husbandry.

(Phys.org) -- Is Earth really a sort of giant living organism as the Gaia hypothesis predicts? A new discovery made at the University of Maryland may provide a key to answering this question. This key of sulfur could allow scientists to unlock heretofore hidden interactions between ocean organisms, atmosphere, and land -- interactions that might provide evidence supporting this famous theory.


The Gaia hypothesis -- first articulated by James Lovelock and Lynn Margulis in the 1970s -- holds that Earth's physical and biological processes are inextricably connected to form a self-regulating, essentially sentient, system.

One of the early predictions of this hypothesis was that there should be a sulfur compound made by organisms in the oceans that was stable enough against oxidation in water to allow its transfer to the air. Either the sulfur compound itself, or its atmospheric oxidation product, would have to return sulfur from the sea to the land surfaces. The most likely candidate for this role was deemed to be dimethyl sulfide.

Newly published work done at the University of Maryland by first author Harry Oduro, together with UMD geochemist James Farquhar and marine biologist Kathryn Van Alstyne of Western Washington University, provides a tool for tracing and measuring the movement of sulfur through ocean organisms, the atmosphere and the land in ways that may help prove or disprove the controversial Gaia theory. Their study appears in this week's Online Early Edition of the Proceedings of the National Academy of Sciences (PNAS).

Sulfur, the tenth most abundant element in the universe, is part of many inorganic and organic compounds. Sulfur cycles sulfur through the land, atmosphere and living things and plays critical roles in both climate and in the health of organisms and ecosystems.

"Dimethylsulfide emissions play a role in climate regulation through transformation to aerosols that are thought to influence the earth's radiation balance," says Oduro, who conducted the research while completing a Ph.D. in geology & earth system sciences at Maryland and now is a postdoctoral fellow at the Massachusetts Institute of Technology. "We show that differences in isotopic composition of dimethylsulfide may vary in ways that will help us to refine estimates of its emission into the atmosphere and of its cycling in the oceans."

As with many other chemical elements, sulfur consists of different isotopes. All isotopes of an element are characterized by having the same number of electrons and protons but different numbers of neutrons. Therefore, isotopes of an element are characterized by identical chemical properties, but different mass and nuclear properties. As a result, it can be possible for scientists to use unique combinations of an element's radioactive isotopes as isotopic signatures through which compounds with that element can be traced.

"What Harry did in this research was to devise a way to isolate and measure the sulfurisotopic composition of these two sulfur compounds," says Farquhar, a professor in the University of Maryland's department of geology. "This was a very difficult measurement to do right, and his measurements revealed an unexpected variability in an isotopic signal that appears to be related to the way the sulfur is metabolized.

"Harry's work establishes that we should expect to see variability in the sulfur isotope signatures of these compounds in the oceans under different environmental conditions and for different organisms. I think this will ultimately be very important for using isotopes to trace the cycling of these compounds in the surface oceans as well as the flux of dimethylsulfide to the atmosphere. The ability to do this could help us answer important climate questions, and ultimately better predict climate changes. And it may even help us to better trace connections between dimethylsulfide emissions and sulfate aerosols, ultimately testing a coupling in the Gaia hypothesis," Farquhar says.

Journal reference: Proceedings of the National Academy of Sciences Provided by University of Maryland