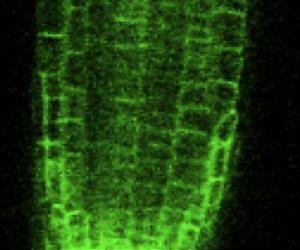 This research has uncovered the phosphorus up take pathways used in soils with scant phosphorous. It can be used in the future to ensure superior up take in hungry soils. This may seem like unnecessary fine tuning the plants and that may well be true. We are all used to adding the short fall back in. Yet this is a nice option to have available.

Once biochar becomes widely adopted, there well be far less nutrient deficiency to deal with but we will also working with far more depleted soils, particularly in the tropics. Thus this could well be important.

When the soil holds not enough phosphorus

This is an image, obtained by confocal microscopy, of a root of the tiny mustard-like plant Arabidopsis thaliana, showing (in green) the localization of the newly identified phosphate transporter, on the membranes (outlines) of the root cells. Credit: Estelle Remy, Instituto Gulbenkian de Ciencia, Portugal, 2012.

Plants cannot survive without phosphorus. It forms the backbone of many crucial molecules (such as DNA) and is a key player in energy transfer reactions. Low availability of phosphorus is a major environmental stress for plants and can lead to great losses in crop production.

But plants can't make their own phosphorus; they get all they need at the root-soil interface, in the form of inorganic phosphate (Pi), so one way to maximise the amount of phosphorus in the plant is to turn up Pi uptake by root cells.

Paula Duque and her research team at the Instituto Gulbenkian de Ciencia (Lisbon) have identified a new Pi transporter in the root cells of the tiny mustard plant Arabidopsis thaliana that acts, crucially, when Pi is scarce. Their findings, published online in the journal New Phytologist, provide insight into how phosphate transport systems may be manipulated in plants to counteract stressful conditions and thus, potentially, lead to improved crop yields.

The transporter the IGC researchers work with is a protein located on the membranes of root cells, which is consistent with it playing a role in the uptake of phosphorus from the soil.

Showing its location in the plant was the first step in a detailed study of when and how the transporter acts. The researchers went on to isolate two Arabidopsis thaliana mutants, both of which are unable to produce the transporter.

They found that, although mutants and wild-type plants grow equally well in the presence of standard amounts of Pi, things look quite different when Pi becomes scarce: the mutant plants (that do not have a functional transporter) display smaller seedlings, smaller primary roots and overdeveloped secondary roots - characteristic features of plants suffering from phosphorus deprivation.

Estelle Remy, a post-doc in the laboratory, describes the experiments, "The effects were completely reversed when we re-introduced the 'corrected' gene for the transporter into mutant plants.

This is a strong indication that it is indeed lack of the transporter that underlies increased sensitivity to low Pi. Furthermore, by forcing plants to produce more of the transporter than usual, we made them more tolerant to low Pi - which further supports a role in phosphorus uptake under these conditions."

Says Paula Duque, "In collaboration with Isabel Sa-Correia's group at the Instituto Superior Tecnico, we used yeast cells that carry the plant transporter to prove that this transporter chemically binds Pi avidly.

"We are thus confident that we have proven, unequivocally, that the Pht1;9 transporter mediates Pi uptake when Arabidopsis experiences phosphorus starvation. Its role in plants makes perfect sense: we know that plants respond to limited Pi by switching on and/or off a series of genes that lead, ultimately, to a balanced distribution of phosphorus in the plant.

"One of the processes entails triggering the production of membrane transporters. We now know that Pht1:9 (our transporter) is one of them, making it a potential target for manipulating crops that may be under environmental stress due to low phosphorus availability".

This study was carried out in collaboration with the Institute for Biotechnology and BioEngineering at the Instituto Superior Tecnico (Lisbon). It was funded by the Fundacao para a Ciencia e a Tecnologia (Portugal).