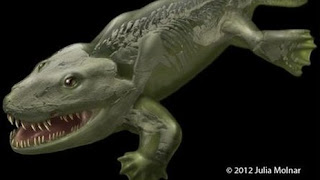 It is easy to imagine a fish wiggling its way through wetlands to eat the vegetation. It is not so easy to find a living example of such a fish that is particularly convincing at all. The fact is that they needed another reason to do this and make the major changes needed. I suggest that what drove the move was security. A fish able to get up even briefly onto land was away from his enemies and survived. Once the adaptation was made to allow this behavior the rest followed.

Fish even today can throw themselves onto the bank and then throw themselves back of into the water. Likely such a clever fish adapted its fins to make better use of this skill and it all developed from there. A thrusting rear set of legs would be naturally acquired.

One presumes that in the primeval world that the rewards were ample and the environment was quickly adopted.


Reconstruction of the body of Ichthyostega

One of the first creatures to step on land could not have walked on four legs, 3D computer models show.

Textbook pictures of the 360-million-year-old animal moving like a salamander are incorrect, say scientists.

Instead, it would have hauled itself from the water using its front limbs as crutches, research in Nature suggests.

The move from living in water to life on land - a pivotal moment in evolution - must have been a gradual one.

Ichthyostega is something of an icon in the fossil world. Living during the Upper Devonian period, it was dubbed a "fishapod", with its mixture of fish-like and amphibious features.

Although it probably spent much of its time under water, at times it was thought to have crawled halfway up onto land on limb-like flippers.

Exactly how it moved on land has been a matter of much debate, however.

Now, a team from The Royal Veterinary College, London and the University of Cambridge, has spent three years reconstructing the first 3D computer model of Ichthyostega from fossils.

It enabled them to study how ancient vertebrates made the "monumental transition" from swimming to walking.

Study author Dr Stephanie Pierce, of The Royal Veterinary College, said the 3D skeleton allowed them to calculate the range of movement in the joints of its limbs for the first time.

The research suggests the animal shuffled on land using hind limb movements similar to that seen in seals rather than moving its limbs in the familiar walking pattern seen today.

Dr Pierce told BBC News: "We're almost bringing the animal back to life by doing this.

"What we've discovered is that some early tetrapods definitely did not have the ability to walk on land. We at this stage are not actually sure which animals - or group of animals - were the first to do this."

Co-author Prof Jenny Clack from the University of Cambridge added: "Our reconstruction demonstrates that the old idea, often seen in popular books and museum displays, of Ichthyostega looking and walking like a large salamander, with four sturdy legs, is incorrect."

Commenting on the study, Dr Susannah Maidment of London's Natural History Museum, said understanding where we came from, or where all the things that live on the land came from, is one of the most fundamental questions.

"What this study suggests is that this animal, which has been traditionally thought of as the first four legged animal to walk on land wasn't walking on land at all.

"It sends us almost back to the drawing board...I guess it even sends you back to the field to look for more fossils."

The research, reported in a paper in Nature, was funded by the Natural Environment Research Council.