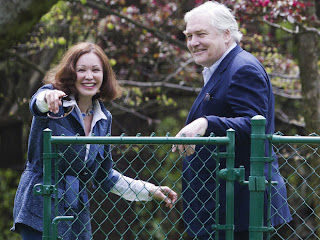 Lord Black has crafted for himself a larger than life persona that is meant to inspire reaction. Unfortunately he allowed himself to get caught up in vagaries of the US legal system and get excessively sentenced for what at best was a misdemeanor. What he uncovered in glaring publicity is the informal corruption surrounding the legal system itself. In Chicago, the court system is gamed by prosecutors to get their wins and they play politics in the mix. Justice takes a distant place in their scheme of things.

In law school, I am told that there are two underlying philosophies of law and all that. All very good of course. The problem omitted is that the third aspect is the underlying political model that can be gamed to also achieve results and this effectively put justice on sale.

True reform cannot happen unless this aspect is addressed.

I personally suspect that the proper answer needs to take the the following form.

1 All appointments to the bench must be drawn from non local jurisdictions were the lawyer in question has never practiced. I really think that this is the least that needs to be done. This is not a minor issue. A lawyer who is senior has met every other lawyer and has history. This opens the door for a far too friendly game of golf. I do not believe that this has been done anywhere.

2 The second idea could be to provide an oversight board of both retired judges, retired politicians and perhaps citizens at large, that reviews the conduct of judges and the quality of their work. The present situation can range from excellent to criminal with rare notice taken.

All this helps to extract the octopus of political influence from the corpus of the law.

I have watched excellent work done by judges but I have also seen a situation systematically undermined by criminal political intervention, so I unfortunately know of what I speak. The only good thing that can be said of present arrangements is that most folks simply give it up or are too small to be affected and never notice.

This is the paradox at the heart of Conrad Black's return to Canada: Why on earth would he choose to live here? For if ever there were a persona designed to be resented, belittled, disrespected and reviled by so-called average Canadians, it is Black's. And guess who crafted that persona? Black.

So perhaps, as Black-baiting wits and scribes, led by New Democrat Opposition leader Tom "Che Guevara" Mulcair, gird their loins for combat with the great despoiler of widows and orphans, they might consider this: Lord Black of Crossharbour lives for the fight. In transforming him, once again, into an avatar of the coddled super-rich - a position he never actually occupied, even at the zenith of his power - they may be giving him precisely what he wants.I don't know Black personally. But I met him a few times, during his ascendancy in the late 1990s. Like others who worked on the National Post launch, I attended his parties and benefited indirectly from the largesse that, for a few years, transformed the Canadian newspaper industry. And what always struck me was this: The alacrity with which, when Black was on top, the great and the powerful lined up to kiss his backside.

I remember then-Ontario opposition leader Dalton McGuinty, at one party in late spring of 1998, trailing around after Black like a puppy dog, desperate for an audience with the great man.

Even then Black presented as someone who had stepped through a time machine out of the 19th century.

Were there excesses? Absolutely. The Post's very existence, in the early days, was excessive. I will never forget the day the lead guitarist from Triumph gave a solo concert outside the editor's office - or the time we put the paper to bed while knocking back margaritas, as a mariachi band snaked its way through the newsroom, in full throat. It was glorious.

Black's Christmas parties of that era were outrageous, glittering affairs attended by the cream of Canadian media, politics and the arts. And for every Canadian newspaper journalist who went to work for Black, often with a substantial increase in pay, there were two others at the Globe and Mail, the Star or the Suns who received offers but stayed put, as their employers produced inducements to keep them. For a few years, until the great stock collapse began in 2000, every newspaper journalist in Canada lived in the penumbra of Black's spending.

But here's the thing: Not one of us who benefited during the golden years expressed reservations at the time, that I know of. Yet, by 2004, as Black's legal problems mounted, there was an outpouring of schadenfreude, as those who had formerly dined at Black's table circled to put the boots in. I remember the editor of one Canadian daily chuckling, with ill-concealed glee, as he contemplated Black's being brought up on charges. The sentiment was all but universal: "He brought it on himself."

And, of course, he did. Black had made himself a target of U.S. prosecutors, just as Martha Stewart did, by courting notoriety and deliberately thumbing his nose at those he considered his inferiors, which was just about everyone. Black had earlier committed the unpardonable sin, in the view of some Canadians, of renouncing his citizenship in exchange for a British peerage.

He then proceeded to make his situation worse by stiff-arming anyone who dared criticize him, and adamantly refusing to acknowledge mistakes. It is Black's lack of contrition, it seems to me, that got him in such trouble.

The justice system, whether in the United States or in Canada, demands obeisance, and despises defiance. Black never gave them obeisance. He fought. Even now, bloody but unbowed, he fights.

Which brings us full circle. Though Canadian born and bred, Black does not speak like a Canadian; he does not think like most of us, either. His is an extravagant personality, out of a storybook. In his insistence on framing his life as a colossal classical drama, Black remains as alien here as a tropical plant among geraniums. Of course, Mulcair would cast him as "the British criminal Conrad Black."

That was easy, and cheap. Clearly, the comparison with former Black Panther Gary Freeman, who once shot a police officer, is risible. How many people has Conrad Black gunned down in his career?

But that's not the point. The symbolism is the point - just as it always was. After all these years away, Black still has the power to get us arguing passionately with one another, about him.

Who but Canadians would pay him this kind of attention? And that, perhaps, is Lord Black's true welcome home.

© Copyright (c) The Montreal Gazette
Posted by arclein at 12:00 AM