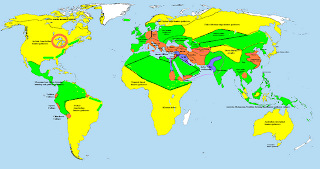 The Hekla event has been pinned down through tree ring dating to 1159 BC with some precision. That date was followed by a twenty year agricultural collapse in northern Europe. Tree ring dating has done the same for us regarding Thera but without the same precision.

Radiocarbon dating for the Great Pyramid, Great Orme, and Lake Superior are coincidental and map the response to a huge new demand for high quality copper well beyond previous capacity. We choose 2420 BC as a working date although precision is likely best described as plus or minus a century.

I also conjecture that Hekla was part of a larger subsidence event along the Mid Atlantic Ridge that actually induced the tsunamis that wiped out the port at Gibraltar (see Rainer Kuhne this blog) and certainly wiped out the port on Lewis and on Bimini.

The evidence suggests that the global aspect of the copper trade ignited with the demand created by the Great Pyramid. Prior to that I suspect that we will find good indications of local networks but little more than sufficient to sustain local need. More important than that is that the Lake Superior copper provide the Minoans and their successors, the Atlanteans a natural monopoly of the highest quality bronze tools. Every other source of copper made crummy bronze that was unpredictable in behavior without extensive working and reworking. It was more suitable for brass if they used zinc at all. This needs to be kept in mind with all ancient mine sites.

What I expect to become clear is that the Minoans led an age of exploration and succeeding trade enterprise that reached out and touched effectively every meaningful corner of the globe. Seamanship obviously preceded this and was already well engaged in this enterprise before the Great Pyramid but it was certainly the driver afterward. This was a leap forward.

This item was prepared by Dale Drinnon in response to my last post on this topic a couple of days ago.

-Now this is all well and good but it does not go nearly far enough. Ever since Archaeologists began checking their radiocarbon dates to see how far the dates were off by using tree-ring chronology, it has been recognised that the Bronze Age of Europe was as old as the Old Kingdoms of Egypt and Mesopotamia, and in Eastern Europe the Bronze age was very old indeed. Crete may be regarded as an outlying edge of the very old cultures established in the Balkans and in Thrace. One of the older sourcebooks on European archaeology, Prehistoric Europe, stated in one place that flow charts had been created for the establishment of metalworking cultures the whole world over, and all lines led back to Southern Mesopotamia circa 4000 BC by that reckoning (a second flow chart was attempted for the spread of pottery, which was very much older, and led to the disputable result that pottery originated in Mongolia 10,000 years ago. Later discoveries in Africa destroyed that notion) That first part is very likely true although the origin of the expansion of the metal-workers has had to be pushed further back in time.

Now there is a general problem in correlating Radiocarbon dates beyond a cetain point in prehistory, and another in matching up the relative chronologies of different places into an absolute equivalency. The second problem is along the lines of Velikovsky's "Ages in Chaos", but it is generally agreed that there are at least a few dates which are commonly repeated that simply don't match up with the ancient records. Now part of this problem involves Crete and part of this problem involves the eruption of the Thera volcano which is often said to have ended the Minoan culture of Crete. More modern research has shown there are several discrepancies in saying that the Thera Volcan ended the Minoan culture on Crete, and part of this resolves into a dispute over dating the volcanic eruption and another aspect involves the interpretation of what was actually meant by "Minoan.""Minoan" culture which recognises a king named "Minos" and outlying ports that also refer to "Minos" are actually late in the sequence and refer to the period when the Cretan Island Empire was being run by Mykenian Greek Militia from the Mainland.This cultural phase began before the eruption of the Thera volcano but mostly occupied a stretch of time that came AFTER it. On the other hand, the beginning of the palace-building cultures on Crete are much earlier and look to have been a local outreach of Egyptian culture during the earlier part of the Old Kingdom. This does not refer to the religion of the people already inhabiting Crete and the associated islands, since the iconography and what we can tell of rituals and beliefs extend solely from "Old Europe".

Hekla Volcano erupted about the same time as Thera and possibly Aetna, but there are problems with the dating for each individual volcanic eruption and the problems are compounded in trying to prove the volcanoes erupted simultaneously. When you are talking margins of error that can span a thousand years in all, it is difficult to be precise. The date of the eruptions has not only been given as 1000 to 1100 BC but also after that, and also again as far back as 1600 to 1750 BC: Velikovsky's date of 1500 BC merely takes the average.

There is also a theory that the aristocracy of the Megalith-builder area of Europe developed out of principles deriving from Egypt and the Near East at about this same time, and the change can be told by an increase of wealth in grave goods and aggrandizement of certain wealthy individuals when the older burials tended to be communal. Sometime around 4000 BC the core cultures began to be much wealthier and a currency based on silver and gold rings or bracelets was established. The idea of a wealthy merchant class had a lot to do with the spread of the Bronze Age, and originally the very idea of using Bronze tools fell to a very special elite. Bronze tools were always more rare and valuable than iron ones, and only the elite could afford them.By 2000 BC the wealthy merchants and the aristocracy they supported were established from Britain to China and Southern Siberia, to Southeast Asia, India, and to large sections of Africa North of the Equator. Soon after 2000 BC we definitely start to see their extensions into the Americas as well. Expansion was driven by the contining need to find more and better sorces of copper and tin as the older sources continued to run out. Eventually the whole structure exhausted and people began to look into the practical aspects of using iron for tools. The occurance of a major natural disaster (or a series of major Natural disasters) at the time of the transition did not help the situation any.