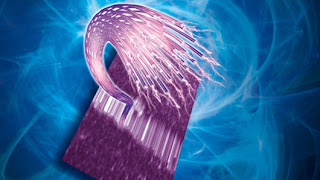 This is an organic fiber derived from photocopying technology that self assembles and has excellent electrical properties. It may be competitive with the oncoming nanotube technologies.

This is almost invisible to the public but our capacity to manipulate at the near molecular level has advanced rapidly and broadly and is still barely begun.

My own objective is to see superconducting skins and refrigerating skins for the fabrication of a magnetic field exclusion vessel. These can also be used for more mundane things such as an efficient cheap Eden Machine.

It appears that current can be also sent from one plate to another device in a managed and segmented manner. This is surely important somehow.


French researchers have produced highly conducive plastic fibers with a thickness of only a few nanometers that self-assemble when exposed to a flash of light. The tiny fibers (one nanometer equals one billionth of a meter) could become a cheaper and easier-to-handle alternative to carbon nanotubes and play a role in the development of electronic components on the nanoscale.

Researchers from the Centre National de la Recherche Scientifique (CNRS), an organization funded by the French government, and the Université de Strasbourg say the fibers combine the properties of metals and plastic organic polymers, which are commonly used to conduct electric current, and see applications in several fields ranging from electronics to architecture.

Lead researchers Nicolas Giuseppone and Bernard Doudin now want to demonstrate that the plastic fibers have the potential to be integrated into products such as flexible screens and solar cells.

Back in 2010, Giuseppone and Doudin succeeded in obtaining nanowires by chemically modifying “triarylamines,” which are synthetic molecules that Xerox used for decades in its photocopying processes. They observed that in light and in solution the new molecules formed miniature fibers by stacking up spontaneously in a regular manner.

In the latest research the molecules were placed in contact with an electronic microcircuit comprising gold electrodes spaced 100 nm apart then applied an electric field between these electrodes. Not only were the fibers were found to self-assemble between the electrodes when triggered by a flash of light, but they are also able to transport current densities approaching that of copper wire. These light and flexible "supramolecular” structures also have very low interface resistance with metals, or 10,000 times below that of the best organic polymers.

“It is difficult to know if the current technologies can incorporate them readily or if we need to change the surrounding devices to adapt these new structures,” Giuseppone told Gizmag. “We are currently trying an insertion in current technologies to improve them, but maybe these fibers are sufficiently novel to enable new technologies. This would be, in fact, the most interesting for us.”
Giuseppone points out that the race to miniaturize electronic components on the nano scale requires “extremely efficient active components with, for instance, very low interface resistance between the components of the electronic circuits."
"Our fibers show such behavior,” he adds.

Another advantage of the self-constructing attributes of the fibers is that they enable the adoption of a "bottom-up" manufacturing approach, potentially making processing easier, faster and cheaper. “Manipulating objects at the nanoscale is very difficult and expensive by a top-down approach,” says Giuseppone.

The work was published this month in the journal Nature Chemistry